Development of the country is possible only by implementing the constitution and law, Imran Khan should fight us instead of making false accusations and finding support on opponents, Qamar Zaman Kaira 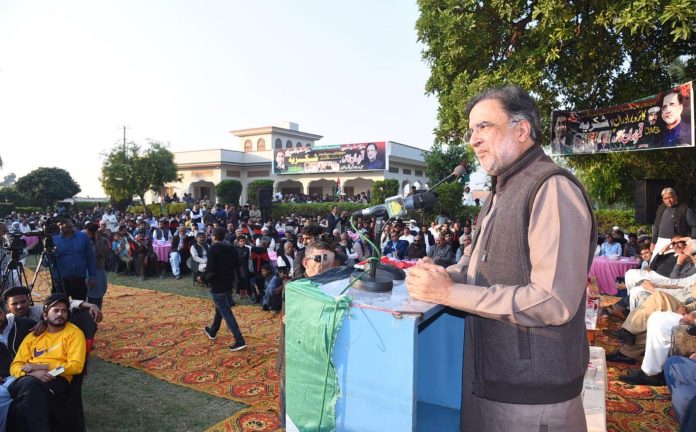 Lala Musa. November 28 (APP): Prime Minister's Advisor on Kashmir and Gilgit-Baltistan Qamar Zaman Kaira has said that the development of the country is possible only with the implementation of the constitution and law. Nothing is coming, they should fight us now instead of scaffolding, the government is using all the resources to help the flood victims.

He expressed these views while addressing a function here on Monday. He said that three and a half million people were affected by the recent floods in the country, the economy was affected, but the government is trying to help the flood victims with all its resources. Will carry out the development work soon.

Adviser on Kashmir Affairs said that due to the war between Russia and Ukraine and other factors, there was inflation all over the world and Pakistan was also affected by it. Despite the difficulties, we are trying to fulfill our responsibility fully. He said that Various development projects are being started in Lala Musa. There is a ban on giving new connections due to the lack of needle gas, it is hoped that it will end soon, then steps will be taken to provide this facility to the people of the area who do not have access to gas.

He said that the development of the country is possible only with the implementation of the constitution and law, Imran Khan can do nothing but make false accusations against the opponents. During his tenure, Imran Khan oppressed former Prime Minister Nawaz Sharif and his family through false cases, similarly ex-President Asif Ali Zardari and his family members were also subjected to political revenge on the basis of false cases. Qamar Zaman Kaira He said that we have fought for democracy while Imran Khan is a threat to democracy.

Pakistan forces have made it clear that institutions will stay away from politics while Imran Khan wants institutions to intervene for him, Imran Khan should now fight us instead of supporting us. Advisor on Kashmir Affairs said that we have not taken so many loans in thirty years as Imran Khan took in three and a half years. Imran Khan's record debts affected the country's economy, but he is blaming us.

He said that when Imran Khan was accused of Tosha Khana, this person remained a hindrance for one and a half years. This person sold the most valuable gifts at huge prices. Thank you to the people who always supported us.

A comprehensive and effective awareness campaign is needed to remove obstacles in the way of inclusion of special people in the mainstream and to empower them economically and financially, President Dr. Arif Alvi

Finance Minister's satisfaction with the availability and production of sugar in the country, emphasis on maintaining strategic reserves of sugar and maintaining sugar prices

A group of thieves stole an undercover cop car and led officers on a chase in the early morning hours...

Love Island fans have raged over a dumping cliffhanger in Tuesday night’s episode after it was already revealed that Haris...

Jan. 24—Three Chicago men charged this week with stealing catalytic converters from dozens of businesses and individuals in Westmoreland, Allegheny...