Fire brigade and other rescue teams rushed to the fire in H Nine market on Sunday, the fire was completely brought under control 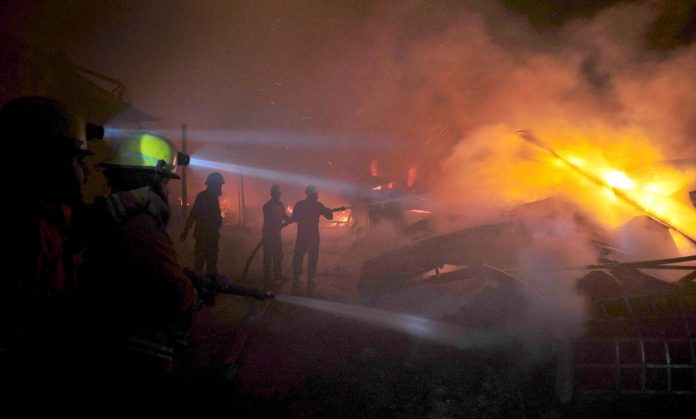 Islamabad. December 7 (APP): Fire brigade and other rescue teams reached the spot and brought the fire under complete control. According to the details released by the district administration, the fire has been completely brought under control, Rescue Rawalpindi and the rescue teams of the armed forces also participated in the operation, there was no loss of life, and the situation is under control. Commissioner Islamabad completed the rescue operation under his supervision. The fire broke out in the cloth and carpet stalls.

On this occasion, Deputy Commissioner Islamabad while talking to the media said that the place where the fire broke out has been completely sealed for tonight, and police forces have been deployed there so that the goods of the shopkeepers are not stolen from there. Yes, twenty percent of the market was affected by the fire, the market will open as usual on Friday.

Deputy Commissioner Islamabad further said that a committee has been formed to determine the causes of the fire, which will make recommendations to prevent such incidents in the future. A sudden fire broke out which immediately engulfed a large part of the market, the fire brigade, rescue and district administration teams continued operations till late night to control the fire and brought the fire under complete control. went.

As a result of the fire, more than 250 stalls were burnt to ashes, but there was no loss of life. According to Deputy Commissioner Islamabad Irfan Nawaz Memon, the fire broke out at the stalls of clothes and carpets. Interior Minister Rana Sanaullah took notice of the incident and asked for a report from the district administration. A fire suddenly broke out in Linde's stall, which engulfed a large part of the market.

Ten vehicles of the fire brigade were dispatched to control the fire, but due to the severe fire, the staff of Rawalpindi Rescue 1122 was also called. 6 fire tenders of Rescue 1122 Rawalpindi reached the spot, more than 25 fire officials of Rescue Rawalpindi took part in the fire extinguishing operation, while as a result of the fire, power supply was affected on H82, G93 international school feeders, which was restored. For ISCO SE Islamabad and Accion team were present on the spot.

Instructions were issued to the concerned staff to restore electricity to the affected areas through alternative sources. On the instructions of the Interior Minister, Deputy Commissioner Islamabad Irfan Nawaz Memon reached the spot and supervised all the operations himself. According to the Deputy Commissioner of Islamabad, the fire broke out at the stalls of clothes and carpets. More than 250 stalls were burnt to ashes due to the fire, but there was no loss of life.

Close and brotherly relations between Pakistan and Qatar are based on common religion, mutual trust and understanding Prime Minister Muhammad Shahbaz Sharif