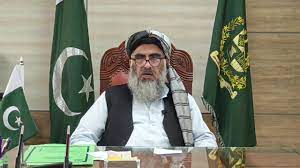 Lahore. December 3 (APP): Federal Minister of Religious Affairs and Interfaith Harmony Mufti Abdul Shakoor has said that minorities in Pakistan have complete religious freedom. When Hindus and Sikhs come to Pakistan to perform their religious rituals, they are provided with all facilities and pilgrims mention the hospitality of Pakistan when they go back to their countries, which is a clear proof of this. It is said that the minorities in Pakistan are completely free and their religious places are protected.

In the conference, Hindu Pandit Bhagat Lal received great applause from the audience by reciting devotional poems in honor of Bani Karim. Addressing the conference, Federal Minister of Religious Affairs and Interfaith Harmony Mufti Abdul Shakoor said that Islam is a religion of peace and security, the real lesson is humanity, our beloved Prophet came as a mercy to all humanity.

He said that it is important to thwart the nefarious plots of a few so-called liberal elements to defame religious people. A small group criticizes religions all over the world. It has to be done while the scholars should come forward in this regard. He said that there are people in all religions who are working for the promotion of religious harmony.

He said that a person cannot be forced to adopt a religion by force, but preference should be given to talking with reason, one cannot win someone's heart with a gun, take extortion from a non-Muslim, seize property. And harming it is forbidden in Islam, our Prophet ﷺ taught us to love and love humanity, in all religions the life, property and honor of every person is respected by all of us.

He said that you are ours, we are yours, Pakistan belongs to all of us and we have to work together for its development and security. Play your role.