Pakistan in Brussels. The eighth round of the European Union Political Dialogue, the next round was agreed to be held in Islamabad next year. 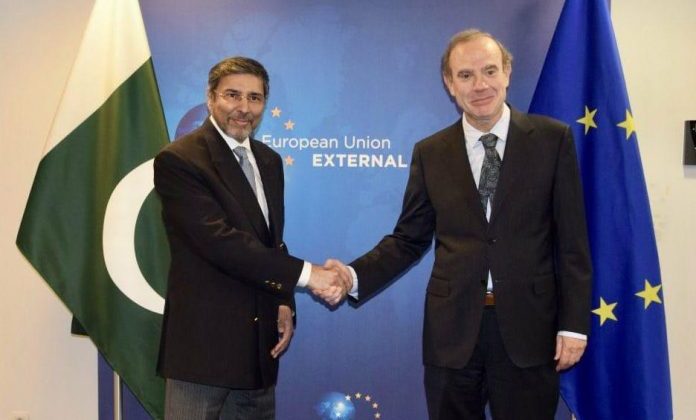 Islamabad. November 30 (APP): Pakistan and the European Union have agreed to hold the next round of political talks in Islamabad next year. This consensus between the parties was reached during the eighth round of the Pakistan-EU Political Dialogue in Brussels. Acting Foreign Secretary Johar Salim and European External Action Service Deputy Secretary General Enrique Mora led their respective delegations.

According to a statement issued by the Foreign Office spokesperson on Wednesday, the parties in the talks specifically mentioned the special importance of political dialogue on the occasion of the 60th anniversary of Pakistan-EU relations. In the discussion, various issues were discussed in the context of Pakistan-European Union relations as well as regional and global developments. The parties agreed to continue working together to further expand bilateral cooperation, highlighting the importance of multilateral partnership and expressing satisfaction at the positive momentum of mutual relations.

The Acting Foreign Secretary appreciated the timely humanitarian assistance provided by the European Union to the victims of the massive floods in Pakistan due to climate change. He said that the continued support of the European Union as an important trade and development partner would be crucial in effectively supporting Pakistan's rehabilitation and reconstruction efforts and rebuilding the damaged infrastructure. The parties recognized that the EU's GSP Plus scheme is a successful model of trade for development and mutually beneficial trade cooperation.

The Acting Foreign Secretary while expressing Pakistan's position on the proposal of the new GSP Plus scheme hoped that mutual objectives including sustainable development, poverty alleviation and employment generation would be properly prioritized in the new scheme. He also apprised the participants of Pakistan's desire to diversify the scope of trade, investment and development cooperation between Pakistan and the European Union.

The parties agreed to explore opportunities for cooperation under EU flagship programs such as Global Gateway and Horizon Europe. The parties also welcomed the recent launch of a comprehensive dialogue on "Migration and Mobility". The dialogue will seek talent partnerships as well as provide an institutional platform for legal migration routes to Europe while enabling the effective implementation of the Pakistan-EU "Re-admission" agreement. The Acting Foreign Secretary informed the Deputy Secretary General about the serious human rights situation in Jammu and Kashmir illegally occupied by India.

He urged the international community to use its influence to urge India to respect the UN Security Council resolutions. He said that India's illegal and unilateral actions of August 5, 2019, aimed at The internationally recognized conflict was to damage and change the demographic structure of the occupied territory. He said that this action is a clear violation of the resolutions of the United Nations Security Council, the Fourth Geneva Convention and international law.

The Acting Foreign Secretary reiterated Pakistan's principled stand for the universal and consistent application of the principles of the United Nations Charter, including the non-use of force, respect for the sovereignty and territorial integrity of States, the resolution of disputes and all States. Equal protection is included to ensure lasting peace and security. He reiterated Pakistan's demand that there should be an immediate end to hostilities and that the Ukraine conflict should be resolved through diplomacy and dialogue as soon as possible.

The Acting Foreign Secretary mentioned the complex challenges facing Afghanistan and reiterated the importance of the international community's continued engagement with the Transitional Afghan Government to ensure the well-being of the Afghan people.

The government is determined to provide access to education to the backward sections of the society, Minister for Planning Ahsan Iqbal addressed the meeting. Islamabad. November 30 (APP): Federal Minister for Planning, Development and Special Measures, Prof. Ahsan Iqbal said that access to higher education is the most important need of the hour to achieve the development goals of the country, while the current government has neglected the backward sections of the society. is committed to provide access to education. These views were expressed by the federal minister while addressing the International Summit on Higher Education and Manpower Development on Wednesday. Speaking on the occasion, the Federal Minister said that the summit is a timely initiative in the context of Pakistan's development priorities as there is a long history of US support for Pakistan's higher education system, ranging from primary and basic education. Including the establishment of centers of excellence to strengthen the higher education system. The ceremony was attended by US Ambassador to Pakistan Donald Bloom, Utah State Senator Dr. Keith Grover, Chairman Higher Education Commission HEC, Dr. Mukhtar Ahmed and others. of The Federal Minister further said that the youth in Pakistan are not only concerned about their future education but also about their livelihood, their mental health and well-being. The Ministry of Planning is already taking steps to support their health, especially psychological support. It should be noted that the youth unemployment rate in Pakistan is estimated to be between 8.5 and 10 percent, 80 percent of the youth workforce has low levels of education. is low and is mainly due to differences in the quality, accessibility and relevance of skills. The Federal Minister further said that we as a nation face key challenges on how to equip our youth population with the knowledge and skills needed to support the national development agenda and priorities, and on the other hand, if we are to develop the skills of our youth. If it fails to use it in the right direction, it will be a missed opportunity. This international summit will be a series of policy dialogues, symposiums, seminars and expert consultations on issues related to higher education to advance sustainable development. It is the first meeting.

George Santos Even Claimed He Was Victim of Assassination Attempt

MSNBC Rep. George Santos (R-NY), the habitual liar who fabricated large swathes of his work history and personal background before...

Brady had a banner day on his own podcast Monday.

Rebel Wilson doubles down on promoting Dubai after LGBT backlash

Rebel Wilson sparked controversy this week when she went on a promotional trip to Dubai despite the anti-LGBT laws of...

‘I miss her smile’: Family, friends remember woman killed in Sheraden on anniversary of her death

Friends and family gathered Monday to remember a local woman who was killed in Sheraden last year. It’s been one full...

The Cowboys' loss to the 49ers proved to be costly for one famous Texas gambler.