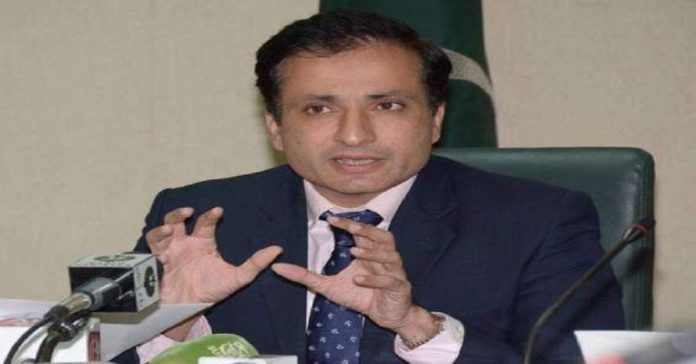 Islamabad. December 8 (APP): Leader of Pakistan Muslim League (N) and Member of National Assembly Mohsin Shahnawaz Ranjha has said that Imran Khan, who calls himself Sadiq and Amin, took a false oath in the Election Commission with a false declaration. He has also committed illegal use of authority, Imran Khan is disqualified for life in the Tosha Khana case, the court should conduct an open trial of Tosha Khana so that the real face of Imran Khan can be revealed to the public. Don't think about what he might have done with the national treasury of Pakistan, NAB case is being made against Imran Khan. He expressed these views while holding an emergency press conference at National Press Club Islamabad here on Thursday.

Mohsin Shahnawaz Ranjha said that the fact that Imran Khan is a liar has been confirmed in the affidavit to be submitted to the Election Commission. Bibi and Zulfi Bukhari's audio case has come to light, the whole matter has come before the public. They sold the watches first and later deposited them at the desired price.

The owner of the shop where the receipt of sale of watches is being shown has sold it since 2018 and his total tax to be deposited till 2018 is Rs.1.2 million, he added that if a common servant If he is also placed on the chair of the Prime Minister, then he may not get carpets, tea sets etc. from the Tosha Khana, but the person who calls himself the most honest and righteous and Amin did not spare even these small things. I salute the journalist who played a role in bringing the Tosha Khana case to light.

He said that Imran Khan has trashed the country's economy during his three-and-a-half-year rule, a clock thief should not be the head of any party or prime minister because then he gives tickets to people like himself.

The unique historical relations between Qatar and Pakistan are based on strong foundations and cooperation, Qatari Ambassador Sheikh Saud Al-Abd al-Rahman al-Thani's speech at the Qatar National Day Celebration

ABC News How a 7-year-old helped investigators solve her mom’s murder After being the sole eyewitness to her mother’s brutal...

White House Chief Of Staff Ron Klain To Step Down Following State Of The Union: Reports

Former Oakland Athletics star and three-time World Series champion Sal Bando died of cancer at the age of 78 on...

Lisa Marie Presley’s sarcophagus is unveiled at Graceland, as family prepares to bury her

Lisa Marie Presley‘s resting place has been unveiled at Graceland a day ahead of her funeral as her family prepares...

Police shot someone in Charlotte’s University area on Saturday, CMPD says. What we know

Police shot someone in Charlotte’s University area Saturday afternoon, according to the Charlotte-Mecklenburg Police Department. The shooting happened in the...

Former Oakland Athletics star and three-time World Series champion Sal Bando died of cancer at the age of 78 on...

Like Aaron Rodgers a year ago, Lamar Jackson’s NFL future will boil down to resolving one thing

It was really a one-sentence news conference that could have ended with the GM's first line about his confidence in...

Here's who experts around the league are predicting to win in the Dallas Cowboys-San Francisco 49ers showdown.

Derek Carr: Rather than tell my side of what happened, I’m choosing to move on

Raiders quarterback Derek Carr has been fairly quiet since he was benched late in the season, and he says he’s...

Coach Kyle Shanahan has spoken out about George Kittle's fun-loving attitude in the past, but the 49ers tight end is...

NFL Hall of Famer and television personality Shannon Sharpe exchanged words with members of the Memphis Grizzlies and Ja Morant's...

A new documentary tells the story of former Toronto Maple Leafs owner Harold Ballard, considered by some to be one...

Steve Kerr is doing his best to teach Jordan Poole that every single moment in a game matters.