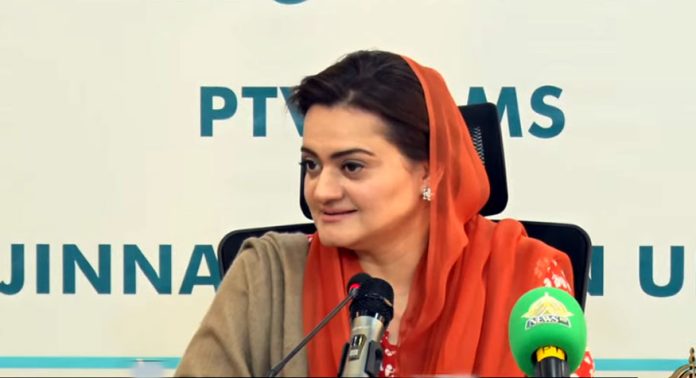 Islamabad. November 23 (APP): Federal Minister of Information and Broadcasting, Maryam Aurangzeb has stressed the need to promote screen tourism in the country and said that screen tourism has gained an important place worldwide, through screen tourism we Can not only tell their story but also promote their culture and social values.

He expressed these views while addressing the signing ceremony of Memorandum of Understanding between PTV Film and Fatima Jinnah Women University for "Naqsh Digital Film" here on Wednesday. The Federal Minister of Information said that unfortunately the film industry of Pakistan faced very difficult conditions, in the 60s, Pakistan was a big country in terms of film production in South Asia as well as the largest film industry compared to its neighboring country. It was a major producer country.

He said that the film industry was almost extinct in Pakistan in thirty to forty years, but in the last ten years, the film industry started to recover again. He said that the Muslim League (N) in its previous government issued a film and culture policy on the occasion of the 70th anniversary of Pakistan in 2018. This policy was prepared for the first time in the seventy-year history of Pakistan. There was an unfinished task that we resumed in April 2022.

The Federal Minister of Information congratulated the entire team of Fatima Jinnah Women University for the successful launch of "Naqsh Digital Film" program. He said that promotion of the film industry is one of our top priorities.

The Federal Information Minister said that the Government of Pakistan is creating a "Film Finance Fund" in which young filmmakers will have easy access. He said that through this fund, grants will be provided to the youth instead of loans, while the corporate sector has also been engaged in this fund for the first time, any corporate listed company will participate in this fund for the production of a film. The income from this will be exempt from tax.

Maryam Aurangzeb said that there is no tax and import duty on the import of cameras, equipment, cinema equipment and other equipment for the film industry in Pakistan.

He said that the entertainment tax inside the cinema has also been reduced to zero, besides there will be no tax on the income of new cinemas for ten years. He said that famous cinemas in Rawalpindi, Lahore, Karachi had the status of landmarks. The Federal Minister of Information said that due to the closure of cinemas in Pakistan, film production had also stopped. Referring to Shabistan, Gulistan and Nadir Cinemas of Rawalpindi, he said that these were the famous landmarks of Rawalpindi.

Unfortunately, the famous cinemas of the past in many cities of Pakistan have shifted to petrol stations, marriage halls and plazas. He said that while encouraging the establishment of cinemas, the government has given tax exemption for ten years on the income of re-built cinemas. He said that any corporate sector will invest in film labs and film studios, then its income has also been exempted from tax.

The Federal Information Minister said that all the information about Pakistan's film policy is available on the Ministry's website. He said that it is not only the announcement of the policy but it is also being implemented.

Federal Minister of Information while appreciating the Media Studies and Communication Center at Fatima Jinnah Women's University said that PTV will provide all possible facilities for Naqsh Digital Film of Fatima Jinnah University. He said that no other channel has the infrastructure that PTV has, PTV is an international broadcaster.

He said that PTV and Radio Pakistan will provide their platform for this program of Fatima Jinnah Women University. On this occasion, Information Secretary Shahira Shahid said that we need to highlight the talent of our youth. He said that films reflect the values of any society. Addressing the event, MDP TV Sohail Ali Khan said that short film is an integral part of PTV.

With the efforts of the Federal Minister of Information, PTV has started the production of short films in a short time. He said that we need to bring forward the talent available in universities and colleges, youth should be given maximum opportunities. Prof. Dr. Sarwat Rasool, Chairperson of Department of English and Senior Reporting Officer of Department of Social Sciences of Fatima Jinnah University also addressed the ceremony.

The damage caused by the floods in Pakistan has not yet been fully recovered, Donald Bloom