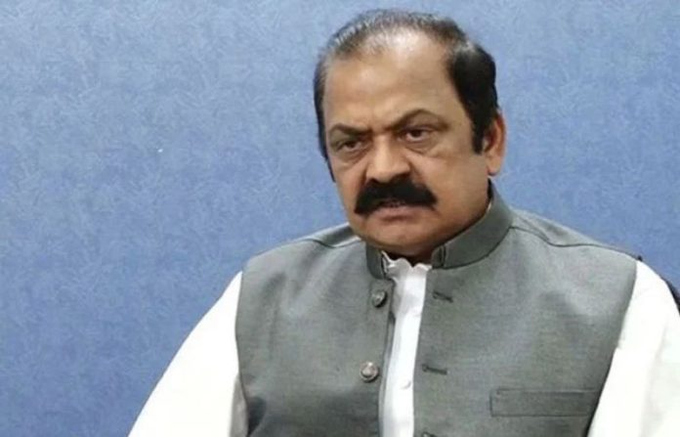 Islamabad. November 25 (APP): Federal Interior Minister Rana Sanaullah Khan has invited Imran Khan to return to the Parliament once again and said that Imran Khan should take the path of dialogue as a politician. When we sit and talk, the deadlock is broken and the decisions are changed. The date of election will not be available from Rawalpindi. There is a third alert from that there may be terrorism in the political gathering in Rawalpindi on November 26. If Imran Khan does not cancel the gathering, make sure the security is foolproof. He was addressing a press conference here on Friday.

Interior Minister Rana Sanaullah Khan said that the secret to the solution of Pakistan's problems, success and development lies in the rule of law and constitution in Pakistan and all institutions should perform the duty of national service keeping in mind their constitutional limits. He said that the determination of the Pakistan Army to live and play its constitutional role is in the best interest of the country and the nation, which was appreciated and supported by the entire nation.

He said that a political leader challenged him, adopted a style in which he went from taunting to blackmailing, started a struggle in the name of false freedom, people for armed struggle. Sworn by.

He said that the leadership of the armed forces was continuously criticized on this side, the appointment of the chief of the Pakistan Army was to be made in the same year, the pretense of a long march was made to invalidate this constitutional process, many tricks were used. But finally, the prayers of the entire nation and in the best interest of Pakistan, the action of the Chief of the Pakistan Army was completed according to the constitutional procedure, all attempts to sabotage this process failed.

He said that Syed Asim Munir is congratulated on getting the post of Army Chief and Sahir Shamshad Mirza as Chairman of Joint Chief of Staff Committee, we hope and believe that they will perform their duties with the best of their abilities in the best interest of the country. will He said that it should have happened that Imran Khan would have postponed his meeting on November 26, he is stubborn, Imran Khan wants to hold a meeting in Rawalpindi on November 26. Postpone.

He said that all the intelligence agencies have informed the government about the gathering as a red alert that any terrorist or terrorist organization can take advantage, Imran Khan's life is also in serious danger, including Imran Khan. have their own intervention, they still have time to adjourn the meeting.

He said that Imran Khan had announced this gathering long ago, it also gives time to prepare for wrong purposes, we have also issued an advisory from the government, to the Chief Secretary and IG Punjab. It has also been informed that there should be strict security arrangements on all sides of the meeting, no one should be allowed to enter without a clothes search, the stage should be kept bulletproof, no relaxation should be done in this regard, limited entry on the stage is guaranteed. should be made and the people on the stage should be monitored, these points have been told to the administration of the Punjab government on the basis of intelligence reports.

He said that if Imran Khan postpones the gathering, he will be saved from embarrassment. He also appeals to the people that this is not a freedom march but a mischief and corruption march. It is a march to destroy, this march will be used to increase hatred. He said that all patriotic citizens are appealed not to support Imran Khan in this evil, sedition process, this process is Pakistan. It is against, the personal goals of a person are not higher than the national interests.

The Interior Minister said that the political and democratic struggle in the country should be allowed to go ahead, these decisions are of the institutions and political parties related to the implementation of the constitution, behind it is the struggle of the political parties, these achievements should be carried forward. He said that ever since Imran Khan started the long march, every day at the start of the long march, two and a half thousand people can see the ocean clapping him.

He said that the establishment as an institution has stood on the decision that it will not back down from the constitutional role at any cost. He said that Mr. Imran Khan, you should become a politician and return to the parliamentary democratic system, sit with the PDM leadership, sit with Maulana Fazlur Rehman, Asif Ali Zaradi, Khalid Magsi and other leaders and ask for history, if If Imran Khan wants to meet Nawaz Sharif, I hope he will not refuse. If there are many difficulties, I am ready to serve as a political opponent as well.

He said that he has seen changes in the decisions of the coalition government regarding the holding of elections, while his leader was on a decision, when he sat with others and had a discussion, he has also seen changes in these decisions. He said that Imran Khan should return to Parliament and become a part of political parties so that Pakistan can be successful and move forward so that inflation in Pakistan is low and the life of the common man is easy and progress is made.

He said that if Imran Khan does not do this, then he himself is responsible for all the problems, including political instability. In response to a question, he said that the organization regularly sat in front of the entire nation and made a promise and announced that we will not interfere in political matters, it is their job to fulfill these promises and get down to the elements. The chief also had a fundamental role in it.

He said that the Prime Minister of Azad Kashmir asked for security regarding the local body elections, so we apologized, we do not have the space at the moment. In response to a question, he said that Imran Khan's helicopter landing and flying. Regarding the sensitivity of the area, in my view, a safe route for the helicopter should be ensured.