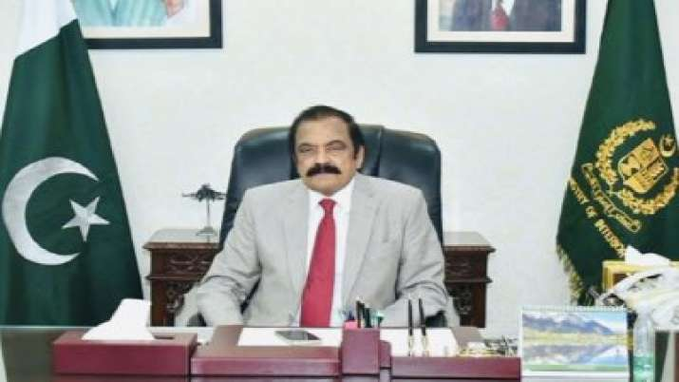 Islamabad. November 26 (APP): Federal Interior Minister Rana Sanaullah has said that Imran Khan's announcement to resign from the assemblies is an admission of defeat. Even if PTI members leave Punjab, there are members to form another government. , a motion of no confidence can be brought in Punjab at any time after which the assembly cannot legally be dissolved,

A motion of no confidence can also be brought in Khyber Pakhtunkhwa, Imran Khan failed miserably in his goal, so he decided to come out of the assemblies to avoid embarrassment, the number of security personnel was more than the public in his rally, the existence of Imran Khan There is a fitna who wants to spread instability and anarchy in the country, until this man is removed from the system, he will continue to cause problems for the country. People will vote him down, Imran Khan handed over Punjab to Farah Gogi for three and a half years, she took money and installed SP and DC.

Farah Gogi ran away from the country with twelve billion rupees and Imran Khan himself has chased her away, what kind of honest man is this? Who did not even leave the gifts of the chest. Reacting to a private TV channel after Imran Khan's announcement of resignation from all assemblies on Saturday, the interior minister said that Imran Khan's announcement of resignation from the assemblies is an admission of defeat, Imran Khan's intention to topple the current government through force. The strategy has failed miserably.

The condition of the sea of people in his long march was that there were more security personnel than the people. can be formed, what do they think that the opposition in Punjab and Khyber Pakhtunkhwa will continue to look at them comfortably, a requisition is ready to submit a no-confidence motion in Punjab, which can be brought at any time.

Similarly, no-confidence motion can be brought in Khyber Pakhtunkhwa as well. He said that I think Imran Khan should have admitted today that his position has been proved wrong and the procedure he has adopted is unconstitutional. They will go towards the elections, but when Imran Khan had nothing to say, he talked about coming out of the assemblies. Rana Sanaullah said that Imran Khan is a stupid person, his existence is a cause of trouble for the country's politics.

As long as this person is in the system, he will continue to create stupidity, sedition and mischief. I think that this man should leave the assemblies.

He said that the resources of the Punjab and Khyber Pakhtunkhwa governments were used to make Faizabad show. If both governments were not with him, not even a tenth of the people would have gathered in his rally, if there were five to one million people in his rally. If there were, it would definitely come towards Islamabad. The Interior Minister said that Imran Khan is falsely claiming his popularity, his position is clear in Punjab, Sindh and Balochistan, Pakistan Democratic Movement will give him a tough time in Khyber Pakhtunkhwa in the next elections as well. In response to a question, he said that unconditional negotiations always take place and that's how things proceed.

If negotiations are started with conditions in front, they are never fruitful. He said that the corruption of Imran Khan has been exposed in front of the nation, he did not leave even the gifts of the closet, besides, Imran Khan took a property worth five billion rupees from a property tycoon and gave fifty billion rupees to the treasury of the nation. Inoculated, if it comes out of the Punjab and Khyber Pakhtunkhwa Assemblies, then the stories of its corruption will be further exposed.