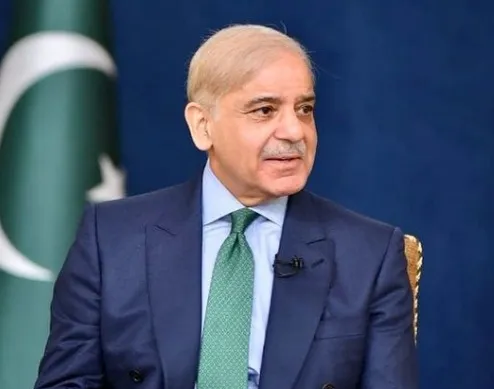 Islamabad. December 1 (APP): Prime Minister Muhammad Shahbaz Sharif has said that Pakistan is committed to eradicating polio, except for some specific areas, polio has been eradicated from most parts of the country. The entire country is united for the complete eradication of polio, and will not allow the national anti-polio initiative to be sabotaged.

He expressed these views while talking to the delegation of the Global Polio Reduction Initiative here on Thursday. The delegation was led by Dr. Christopher Ellis, chairman of the Polio Oversight Board and president of the Bill and Melund A Gates Foundation. The delegation included WHO Regional Director Dr. Ahmed Al-Mandhari, UNICEF Regional Director George Laria Adji, National Chairman NPPC Aziz Memon, Rotary International and Polio Eradication Program partners and aid agencies officials.

Federal Minister for National Health Services and Regulations Abdul Qadir Patel was also present on this occasion. Speaking to the delegation, the Prime Minister said that the government of Pakistan is determined to eliminate polio from the country, polio has been eliminated from most parts of the country. Except in certain areas, polio eradication is being ensured through periodic vaccination campaigns.

He said that regardless of political differences, the entire country is united for the complete eradication of polio. The government of Pakistan will continue its efforts to rid the country of polio and vaccinate every child. The Prime Minister said that the entire Pakistani nation is grateful to our partners and donors, including Bill and Melinda Gates Foundation, Rotary International, UNICEF and WHO, for helping to eradicate polio. The delegation assured Pakistan's full support and determination to eradicate polio.

The Prime Minister thanked the delegation for their tireless efforts to eradicate polio in Pakistan. He also highlighted the efforts of the government which have resulted in controlling the spread of the virus to such an extent that a large part of the country has become polio free while only a few areas remain where anti-polio is administered from time to time. Eradication of polio is being ensured through the campaign.

The Prime Minister said that anti-polio teams are provided with full security, Pakistan will not allow anyone to sabotage this national effort. Prime Minister Shehbaz Sharif directed the Federal Minister for National Health Services Abdul Qadir Patel to visit Peshawar immediately and to speed up efforts to vaccinate children to prevent polio virus and especially in these areas of Khyber Pakhtunkhwa to administer polio vaccine. Efforts should be made with the provincial government authorities for supply where the polio virus is still present.

Approval of new procedure for distribution of cash to BISP beneficiaries