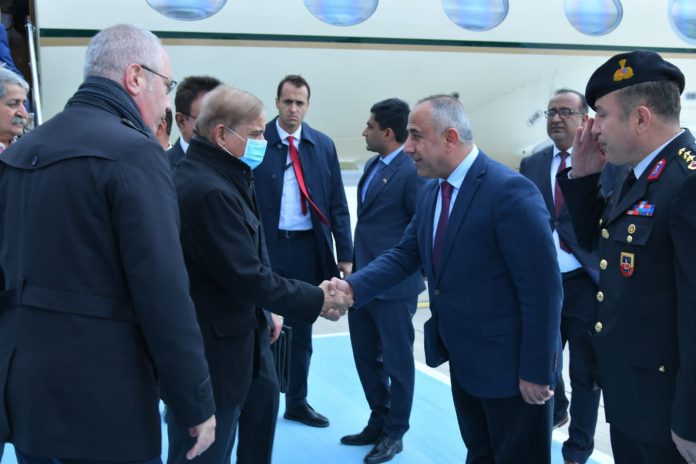 The Prime Minister is visiting on the invitation of Turkish President Recep Tayyip Erdoğan, a high-level delegation is also accompanying the Prime Minister. During the visit, Prime Minister Mohammad Shahbaz Sharif and President Erdoğan will inaugurate PNS Khyber, the third of the four corvettes for Pakistan Navy at Istanbul Shipyard.

The joint project based on joint cooperation between the two countries is an important milestone in the Pakistan-Turkey strategic partnership.

Earlier, the launching ceremony of the first corvette 'PNS Babar' for the Pakistan Navy was held in Istanbul in August 2021, while the foundation stone for the construction of the second ship 'PNS Badr' was laid in Karachi in May 2022.

Later, the two leaders will discuss bilateral relations, regional situation and issues of common interest, and will address a joint press conference. The Prime Minister will also meet the delegation of Turkish business community and President of ECO Trade and Development Bank (ETDB).

The important agreement regarding climate change and the establishment of the "Damage and Loss" fund in COP 27 is a great success, Foreign Minister Bilawal Bhutto Zardari's interview to a foreign broadcasting organization

The Prime Minister arrived in Turkey on a two-day visit, the visit will promote mutual cooperation, strategic partnership and economic activities between the two brotherly countries, Maryam Aurangzeb's tweet

For years, the Rose Bowl has blocked expansion to the college football playoff over a sunset. Now, it's finally relented...

Two small children were rescued from the backseat of a cold car where a pair of adults in the front...

By Ted Hesson WASHINGTON (Reuters) -U.S. President Joe Biden’s administration would make it harder to seek asylum at the U.S.-Mexico...

Tyler Adams led by example, and set a tone that now defines the USMNT — with an authority that blossomed...

The Green Bay Packers quarterback and Bucks minority owner was courtside for the game against the Lakers at Fiserv Forum.

World Cup 2022: The United States is a significant underdog vs. the Netherlands

The USMNT is +333 to win the game in regulation.

Does that deal make sense? Let's break down every move of baseball's hot stove season.

Tom Crean on taking over IU: We would clean out lockers and find lighters and roach clips

The five-time All-Star played for eight MLB teams in his 22-year career.

Deion Sanders' stated plan this weekend is to lead Jackson State to a SWAC championship on Saturday and announce Sunday...