The damage caused by the floods in Pakistan has not yet been fully recovered, Donald Bloom 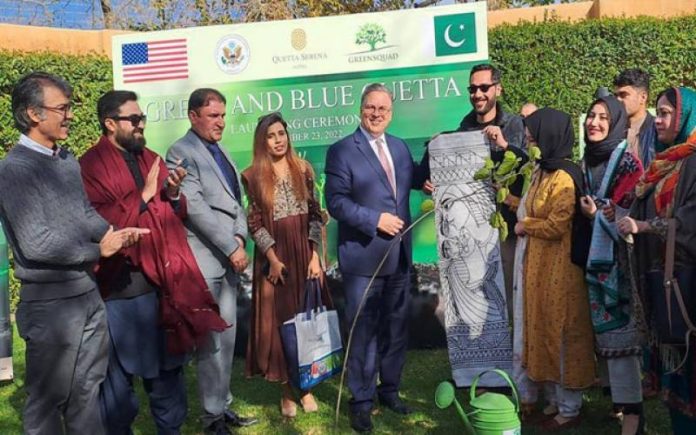 Islamabad. November 23 (APP): US Ambassador to Pakistan Donald Bloom has said that the damage caused by floods in Pakistan has not yet been fully recovered, every country is facing the dangers of climate change. We are working on increasing Pakistan's capacity to deal with climate change through the establishment of a Green Alliance.

He expressed these views while addressing an event during his visit to Quetta, the capital of Balochistan. On this occasion, the American ambassador also met the Chief Minister of Balochistan Province, Abdul Qudous Bizenjo.

The US ambassador also met with local partners working to address the effects of climate change in the province, representatives from higher education institutions, local NGO leaders and Afghan refugees. On the occasion of his visit, Ambassador Bloom discussed the establishment of a green coalition comprising various partners to reduce the effects of climate change in Pakistan.

On the occasion, he also highlighted the importance of strong cooperation between the US and Pakistan to promote economic development through higher education and women empowerment. According to a press release issued by the US Embassy in Islamabad, Ambassador Bloom in Quetta also planted a sapling while participating in the public tree planting campaign.

It should be noted that this activity is part of a larger project to grow forests in cities in the future and this project, led by youth workers, aims to deal with climate change, raise awareness about climate risks and social resilience against climate change. To empower and provide a platform where diverse groups can be brought together for wider social welfare.

Speaking at the event, Ambassador Bloom said that the American government has provided aid worth more than 97 million dollars to the needy people and communities affected by floods this year across Pakistan, including Balochistan.

He said that he realizes that the damages caused by the floods have not yet been fully recovered and that every country is exposed to the dangers of climate change. This is why we are working on increasing Pakistan's capacity to deal with climate change through the establishment of a Green Alliance.

During his meetings with the officials of Balochistan University of Information Technology, Engineering and Management Sciences and Sardar Bahadur Khan Women's University, the American Ambassador discussed how the educational programs supported by the American government could meet the needs of economic development. are doing

It should be noted that the US government has provided scholarships to 300 students, including 56% women, to pursue higher education and contribute to the social development of their communities through USAID. Ambassador Donald Bloom also attended the inauguration of a project for women in business in Balochistan.

Under which they will be provided with a basic investment of three and a half million dollars. On this occasion, he said that the United States believes that empowering women is a critical investment for the future of both the individual level and the global economy. He said that by working together on projects like this, we can not only strengthen the equality of women in the business sector but also illuminate other vast possibilities that will bring prosperity to Quetta and Balochistan.

The United States is also proud to partner with UNHCR on a project to provide jobs to Afghan refugees and local talent in Quetta. It should be noted that since 2009, with US assistance, UNHCR has completed 251 projects to provide infrastructure for schools, water and sanitation, and improve public health for the benefit of Afghan and local host populations. has reached

DAKAR (Reuters) – Three U.S. citizens of Cameroonian origin have been arrested and charged with raising funds for separatist fighters...

Former Vice President Mike Pence in an interview that aired Monday suggested he would not opt to run again for...