Pakistan's initiative is climate justice, not charity, it is welcome for developed countries to accept the challenge of climate change, PM Shehbaz Sharif 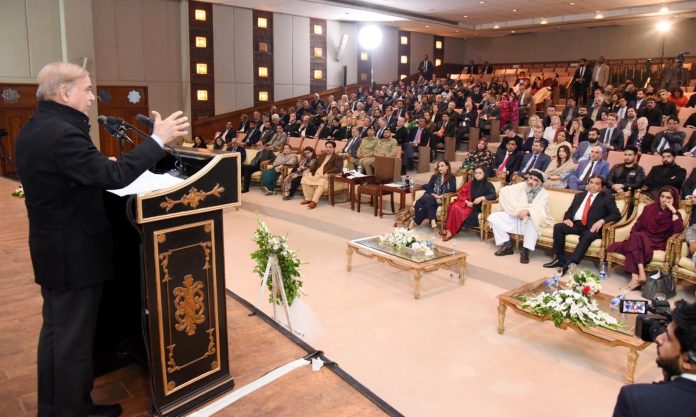 Islamabad. December 1 (APP): Prime Minister Muhammad Shahbaz Sharif has said that Pakistan effectively highlighted the agenda of loss and damage caused by disasters in the Sharm-ul-Sheikh conference, which resulted in the establishment of the Loss and Damage Fund. I came, this is a historic initiative, Pakistan's case is climate justice and not charity, it is welcome to accept the challenge of climate change on the part of developed countries, so it will be necessary to implement the commitments made in this regard.

He was addressing a function held here on Thursday to appreciate the efforts of relevant institutions and international partners on Pakistan's successful climate diplomacy during the COP27 conference in Sharm el-Sheikh. Floods have caused a lot of damage, 33 million people have been affected, 1800 deaths have occurred, while the damage to agriculture, industry, livestock, and infrastructure has been estimated at 30 billion dollars.

He said that he is grateful to all the countries that helped the flood victims of Pakistan, the help provided in this hour of difficulty will always be remembered. The Prime Minister said that philanthropists and welfare organizations within Pakistan have generously helped the victims, similarly, all the provincial governments, especially the governments of Sindh and Balochistan, have given full support to the victims.

He also appreciated the efforts of National Disaster Management Authority and Provincial Disaster Management Institutions. He said that Foreign Minister Bilawal Bhutto, Climate Change Minister Sherry Rehman and Information Minister Maryam Aurangzeb played an active role in highlighting Pakistan's position at the COP27 World Forum. He said that the rains caused by climate change caused enormous destruction in Pakistan, although Pakistan's share in the emissions of gases that cause climate change is less than one percent, we wish and pray that what happened in Pakistan would not happen in any other country. However, it is a bitter truth that the effects of climate change and the resulting disasters are not limited to borders.

Prime Minister Shehbaz Sharif said that it was the first time that Pakistan's voice was heard at the global level and thanks to these efforts, the Loss and Damage Fund was established. . He said that Pakistan's case is climate justice and not charity.

He said that it is gratifying that the developed world has recognized the importance of the challenge of climate change and the wonderful agreement reached in Sharm el-Sheikh, which resulted in the establishment of the Loss and Damage Fund, to implement the agreements. Implementation will be more important. On this occasion, the Prime Minister praised the efforts of the relevant ministries and authorities for the successful diplomacy in the Sharm El-Sheikh Conference. Speaking at the event earlier, Federal Minister for Climate Change Sherry Rehman said that thanks to all the stakeholders for the successful diplomacy in COP 27. All this has been possible under the leadership and guidance of the Prime Minister. He said that due to the recent rains and floods, severe damage has been caused to Pakistan, the countries suffering from the effects of climate change want cooperation from the developed countries.

Federal Minister Sherry Rehman said that the coming time is decisive with regard to climate change, the whole world needs to work together to deal with the effects of climate change. He said that the Loss and Damage Fund should be put on the agenda. Foreign Minister Bilawal Bhutto played a leadership role for the Loss and Damage Fund, which will help developing countries to compensate for the damages caused by the effects of climate change. The Federal Minister also praised the role of the Secretary General of the United Nations for the purpose of climate justice.

On this occasion, Minister of State for Foreign Affairs Hina Rabbani Khar said that COP 27 was a historic conference in which the Loss and Damage Fund, which had been stalled for three years, was established. The establishment of the fund will prove to help in bridging the trade deficit between the global North and South.

He said that the unity between the developing countries is very important, the establishment of the fund and the formation of the committee in this regard are the beginning of achieving the big goal. Practical measures in this regard will be welcome. A large number of diplomats were present. On this occasion, the participants were shown a documentary by the Ministry of Climate Change related to the disasters caused by floods in Pakistan, relief activities, the visits of the Prime Minister, the Secretary General of the United Nations and the federal cabinet to the flood affected areas.

Sheikh Falah bin Jassim, a member of the royal family of Qatar, arrived in Pakistan on a three-day visit

The Yankees announced on Sunday morning that the club and infielder Gleyber Torres have agreed to a one-year contract, avoiding...

Dancing On Ice: Phillip Schofield confirms skate-off is AXED ‘for one week only’

Dancing On Ice‘s Phillip Schofield has confirmed that the dreaded skate-off has been scrapped this week. It was previously said...

Trayvon Strawn A man who shot to death Davonta Jason Combs with an assault rifle and wounded a woman during...

Leaders of the House and Senate Intelligence Committees shared bipartisan outrage Sunday after a series of discoveries of classified documents in...

"Overrated" chants filled the Bryce-Jordan Center on Sunday afternoon, as Penn State students looked for something interesting to partake in,...

“Avatar: The Way of Water” claimed the No. 1 spot on the domestic box office charts for the seventh weekend...

Celebrities, they’re just like us. And like us, they experience heartbreak, too. Just ask Michael B. Jordan. While making his...

A story of fate: DerMarr Johnson reunites with former coach

Without a sudden change of mind from an eighteen year old, the dots never would have connected down the line...

As of Tuesday night, word around the league was that the Broncos were closing in on making a decision regarding...

Rory McIlroy carded eight birdies, all from inside 6 feet, as he took a three-shot lead heading into Monday's final...

Steve Kerr believes that Donte DiVincenzo quickly has become a Warriors fan favorite because of his "fearless" play on the...

According to a new report, the Green Bay Packers prefer to move on from Aaron Rodgers, a potential Jets trade...

Have the Bengals really figured Mahomes out?

You've heard it all week: Patrick Mahomes is 0-3 against Joe Burrow's Bengals. But is Mahomes the reason the Chiefs...