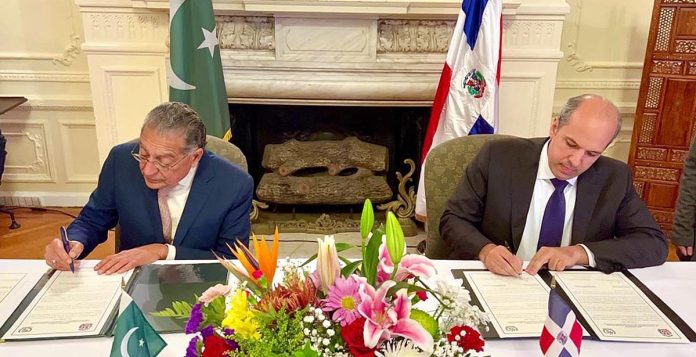 New York. November 19 (APP): Pakistan has announced the establishment of diplomatic relations with the Dominican Republic, in a prestigious ceremony organized in this regard, Ambassador Munir Akram, Permanent Representative of the Islamic Republic of Pakistan to the United Nations, and the Dominican Republic. Permanent Representative Jose Blanco signed a joint declaration at the Permanent Mission. According to a press release received here from the New York Mission, Ambassador Munir Akram said that Pakistan is announcing the formal establishment of diplomatic relations between the two countries here at the United Nations today.

Ambassador Munir Akram welcomed the historic achievement and said that the two permanent representatives have expressed the confidence that the establishment of diplomatic relations will lead to political, economic, commercial, cultural and tourism cooperation between the two countries in various fields and areas of mutual interest. New avenues of cooperation will open up. He also expressed satisfaction over the existing cordial relations and close cooperation between the two countries at the United Nations and other multilateral forums.

Both sides vowed to further strengthen these ties by diversifying existing areas of cooperation. The establishment of diplomatic relations will also facilitate joint efforts between the two countries to achieve the Sustainable Development Goals and the United Nations Agenda for Promoting Global Development and Prosperity. Both countries are part of the Group of 77 and China. The Dominican Republic became independent in 1844 and is one of the second largest and most diverse countries in the Caribbean and a founding member of the United Nations.

Work on establishing institutional links between Pakistan and Ethiopia for social, economic and political cooperation is in progress, Ethiopian Ambassador