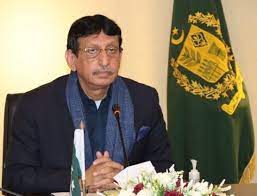 Islamabad. November 25 (APP): Federal Minister IT and Telecommunication Syed Aminul Haq has said that for providing IT, telecom facilities including mobile phone and internet connections in the backward areas, 70 to 65 billion rupees will be allocated. More projects will be completed next year. He expressed these views during a meeting with the delegation of GSMA (Global System for Mobile Communications Association) Asia Pacific in his office on Friday and in a special conversation with APP. What during

The delegation included Julian Gorman, Head of GSMA Asia Pacific, Janet White, Head of Policy, Saira Faisal, Country Head. In the meeting, a detailed discussion was held regarding connectivity, digitalization and telecom sector in Pakistan. The delegation fully acknowledged the efforts of Syed Aminul Haq for digitization in Pakistan. In this regard, Federal IT Minister Syed Aminul Haq said that more than 70 projects costing 65 billion rupees are being completed for connectivity in backward areas, these projects are being completed next year. will be completed by the middle of

To a question, he said that after the completion of these projects, broadband services will be available to 28 million people. He said that with regard to connectivity, the Universal Service Fund (USF), a subsidiary of the IT Ministry, The efforts are commendable. The Federal IT Minister said it is my moral responsibility to play a role in solving the problems faced by the telecom industry.

Speaking on the occasion, Julian Gorman said that GSMA is ready to cooperate with the Ministry of ITV and Telecom in all the required areas. During the visit, I was pleasantly surprised by the meetings with the people and the industry here. Contrary to what I heard about the seriousness of the situation in Pakistan, the situation is satisfactory. Senior officers of the Ministry of IT and Telecommunication were also present in the meeting.