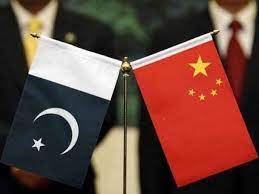 Beijing, November 29 (APP): An S&T center has been established in China as a milestone to promote bilateral cooperation in the field of science and technology between China and Pakistan. In this regard, a webinar was held in Beijing in which Pakistan's Special Technology Zones Authority (STZA) and China's Zhongguancun Belt and Road Industrial Promotion Association (ZBRA) launched the center.

Speaking in the webinar, Pakistan's Ambassador to China Moinul Haque said that during the recent visit of Prime Minister Muhammad Shahbaz Sharif to China, information technology has emerged as an important area of China-Pakistan cooperation as evidenced by the joint working group under CPEC. S&T is established. He said that the S&T Center would be an important step towards enhancing bilateral cooperation.

On this occasion, Zhang Xiaodong, President of China Zhongguancun Belt and Road Industrial Promotion Association (ZBRA) said that we use this center as a platform to mobilize all parties in China and Pakistan, especially high-tech. Enterprises and institutions will be used to develop and mobilize resources for science and technology cooperation.

He said that a Chinese delegation of S&T Enterprises will visit Pakistan next year for field investigation. President of Pakistan's Special Technology Zones Authority (STZA), Hamza Saeed Orakzai, terming the S&T Center as a liaison office for Chinese enterprises, said that the S&T Center, in addition to promoting innovation, technology transfer,

A business platform for cooperation and cross-border investment will be created and the exchange of delegations at the public and academic level and student cooperation channels will be designed to create businesses. China will create a framework for Pak S&T cooperation and also promote a cooperation base for productivity.

NHS crisis: Why are Brits still struggling to get GP appointments?

Britons are still struggling to get face-to-face GP appointments — despite multiple ministers promising to fix the situation. Furious campaigners...