Minister of Defense of South Korea met with the defense ministers of Indonesia, the Philippines and Vietnam respectively 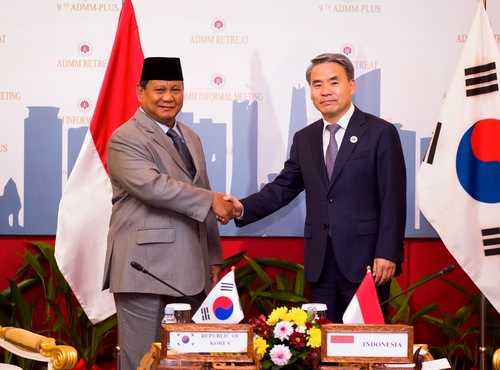 During the South Korea-India Defense Ministers' meeting, Lee Jong-sub spoke highly of the close cooperation between South Korea and India in the fields of defense and military industry, and mentioned that South Korea participated in the "Komodo" multinational naval joint exercise led by India and jointly promoted supersonic fighter jets. "KF-21" research and development projects and other cooperation. Prabowo said that India fully supports the defense and military industry cooperation between the two countries, and emphasized that it will ensure the smooth development of the new generation fighter aircraft research and development project.

Lee Jong-seop pointed out that South Korea regards India as the most core defense cooperation partner and attaches great importance to it. The two countries will enhance India's national defense capabilities through military-industrial cooperation, which will not only help strengthen the relationship between the two countries, but also help maintain peace and stability in the Indo-Pacific region.

At the meeting between the defense ministers of Han and Philippines, Lee Jong-seop said that the South Korean side hopes to promote high-level exchanges between Han and the Philippines, expand the implementation of joint military exercises, and strengthen military-industrial cooperation. The Philippines hopes to cooperate with South Korea on matters such as strengthening maritime security forces such as patrol ships and developing multi-purpose fighter jets.

Faustino also expressed deep concern about the recent security situation on the Korean Peninsula, condemned North Korea's successive launches of ballistic missiles, and pointed out that North Korea should fulfill its international obligations. Lee Jong-seop emphasized that Han and the Philippines should strengthen cooperation with ASEAN member states and unanimously and resolutely respond to North Korea's provocations.

The news is published by EMEA Tribune & Yonhap News Agency

Turkish President Says He Will Launch Ground Military Operations Against Kurdish Forces in Iraq and Syria Xinhua News Agency, Ankara, November 22 (Reporter Wang Tengfei) Turkish President Recep Tayyip Erdogan said on the 22nd that Turkey will launch ground military operations against the Kurdish armed "People's Protection Units" in Iraq and Syria as soon as possible to eradicate "terrorists." Erdogan said on the same day that in the past few days, Turkey has been using planes and drones to attack "terrorists" in response to the attack in Istanbul. He stressed that Turkey will use tanks, artillery and soldiers to eradicate "terrorists" as soon as possible. He said that the purpose of Turkey's military operations is to protect the safety of the country and citizens, which is Turkey's legal right. On the 20th, the Turkish army launched an air strike code-named "Claw Sword" against the bases of the Kurdish Workers Party and the "People's Protection Forces" in Iraq and northern Syria. The air strike is considered to be in retaliation for the bombing attack in Istanbul, Turkey's largest city, on the 13th of this month. Erdogan's statement this time shows that Turkey's strikes against armed personnel in the region will not be limited to air strikes, but will be transferred to cross-border ground military operations. Founded in 1979, the PKK is listed as a terrorist organization by Turkey, the United States and the European Union. The PKK seeks to establish an independent state by force in the Kurdish areas on Turkey's borders with Iraq, Iran and Syria. The "People's Protection Forces" have been active in the Kurdish-inhabited northern region of Syria since the outbreak of the Syrian civil war, and currently control a large area of northern Syria. Six people were killed and 81 injured in an explosion on Independence Avenue next to Taksim Square in the center of Istanbul on the afternoon of the 13th. Turkey pointed the source of the attack to the Kurdistan Workers Party and the Syrian Kurdish armed "People's Protection Units". (Editors in charge: Yu Yang, Cui Yue) Share for more people to see