Jerusalem, West Bank on edge after outbreak of violence

How a MAGA Split With Big Business Could Break the Economy 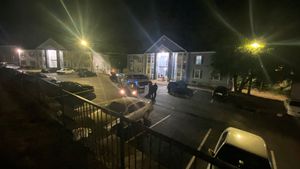 DeKalb police said a 17-year-old was killed and two other people were also shot while attending a candlelight vigil for a recent homicide victim.

Police told Channel 2 Action News the suspect walked up to the victim and shot the 17-year-old during a candlelight vigil for Taneaious McCune, who was shot and killed during a Friday home invasion on Gresham Road.

DeKalb police said that at 6:18 p.m., officers responded to 2051 Flat Shoals Parkway in reference to a person shot. When they arrived, they located a 17-year-old dead on the scene.

The address is listed as the Highlands at East Atlanta Apartments.

While investigating this scene, an 11-year-old boy arrived at the Walmart at 2427 Gresham Road with a gunshot wound to his finger. He told police he was at this location when the shooting began.

The 11-year-old was taken to an area hospital.

Police said another teen, a 16-year-old boy, is at a nearby hospital with a gunshot wound to the hand.

The shooter ran away from the scene, according to police.

Detectives are on the scene investigating the situation.

Channel 2 has a crew on the scene working to learn more about this developing incident on WSB Tonight at 11.