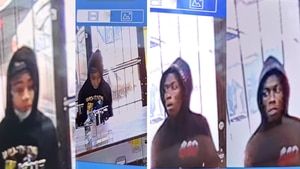 Three suspects are wanted in connection to a theft at a local business, according to the Memphis Police Department.

The theft happened at a store in the 5100 block of Summer Avenue.

On Nov. 22, at approximately 4 p.m., three men walked into the store and began asking the owner how to get key fobs for Infiniti vehicles.

MPD said the owner denied their requests, and the suspects left in a four-door black Infiniti with fake drive-out tags.

That’s when police said the owner discovered his work truck had been burglarized and a key fob programmer was missing.

The suspects in the same vehicle are also wanted for an attempted auto theft on Covington Pike that happened the same day, MPD said.

Police released photos of the suspects.

Investigators are asking the public for help identifying the men.

Anyone with information should call Crime Stoppers at 528-CASH. You will be given a secret ID number, and your identification will remain completely anonymous.

You can also submit your tip at http://www.crimestopmem.org, where you will be able to review wanted fugitives and safely send investigators any helpful information on the suspect or suspects responsible for this crime. You can submit anonymous tips from our free and secure mobile app by searching your app store for “P3 Tips”.

If an arrest is made, you could be eligible to receive a cash reward of up to $2000 from Crime Stoppers of Memphis and Shelby County, Inc.

Download the FOX13 Memphis app to receive alerts from breaking news in your neighborhood.

Arizona governor welcomes successor, though GOP candidate has not conceded