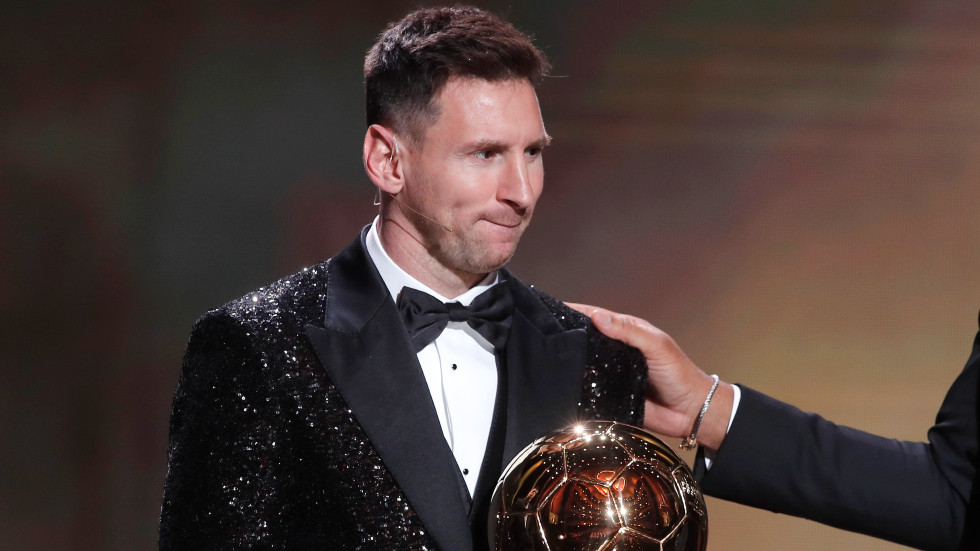 Paris Saint-Germain have revealed that Lionel Messi missed training the morning after he won the Ballon d’Or – and their announcement suggests that he could be set to miss at least one game in the French giants’ busy schedule.

The Argentina captain was awarded France Football’s prestigious gong for the world’s best player for a record seventh time at the end of a star-studded ceremony at the Theatre du Chatelet in the French capital on Monday.

The 33-year-old had attended the gala with wife Antonella and their three sons and appeared all smiles before and after receiving the honor.

But on Tuesday morning, while seven gold goats were laid out in the front of the Eiffel Tower by sponsor Adidas, Messi and compatriot Leandro Paredes did not report for coach Mauricio Pochettino’s session.

A statement from the Ligue 1 leaders said that the pair had shown symptoms of gastroenteritis, with an update on their progress expected on Wednesday ahead their domestic clash with Nice in the evening.

PSG now face the prospect of being without Messi for at least part of a run of three games in six days.

Their top-of-the-table clash at the Parc des Princes on Wednesday is followed by a trip to fifth-placed Lens on Saturday and a visit from Club Brugge in their final Champions League group stage game next Tuesday, having already reached the knockout stage.

Despite his likely frustration at losing Messi to another issue after absences across the early season through knee and hamstring knocks, Pochettino was happier to publicly congratulate the striker and his family.

“Let him take advantage [of it], and I hope that this day can be the first of the construction of an eighth. Why not?”

On Twitter, a joker asked if generational rival Cristiano Ronaldo had spiked the food at the Ballon d’Or ceremony to spark Messi’s illness.

Did Ronaldo spike the food at the Ballon d’Or? https://t.co/s0SmHNde2q

Following a horror ankle twist at the weekend, sustained in a 3-1 win over Saint Etienne in which Messi provided a hat-trick of assists, the Brazil talisman is facing a lay-off of between six and eight weeks.

PSG players have been unlucky with injuries and illness in recent days, with Neymar Jr – who finished 16th in the Ballon d’Or rankings – suffering the worst.

There are some returns on the horizon, though. Following his personal life crisis and near-split from wife Wanda Nara, Mauro Icardi resumed training on Tuesday, as did Julian Draxler – although the German will continue his recovery at the club’s Camp des Loges training center.

Absentees Georginio Wijnaldum and Ander Herrera should also rejoin the group before the end of the week.

3 reasons Butler got blown out by Villanova: Dawgs suffer worst defeat since 1994