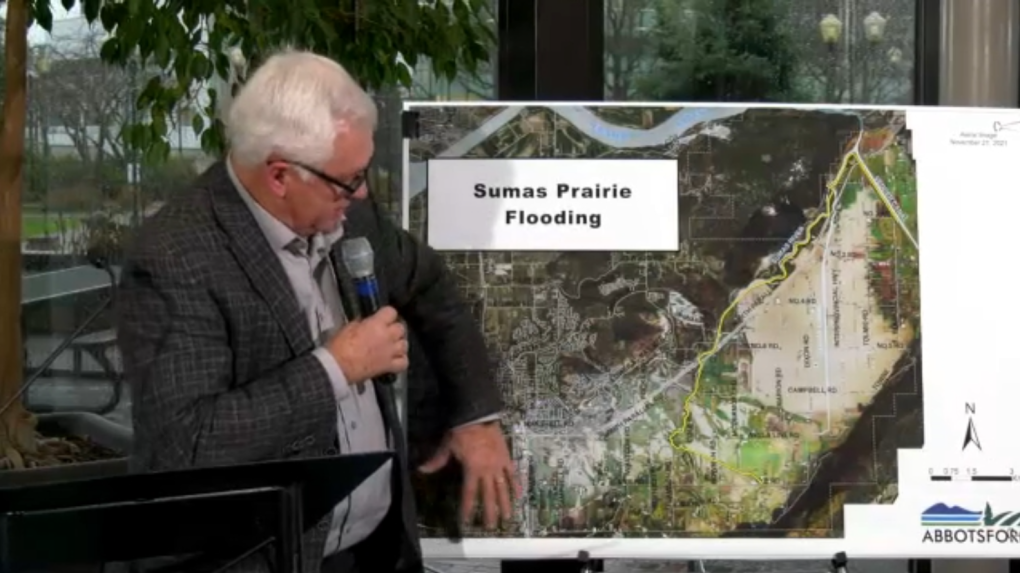 
The mayor of Abbotsford says “it will likely be weeks” before all of the floodwater has been pumped out of the eastern Sumas Prairie.


Mayor Henry Braun told reporters the rain falling on the South Coast Thursday has slowed the city’s Barrowtown Pump Station in its efforts to remove the water from the flooded region, but water levels were not rising Thursday.


“It will likely be weeks before we can pump all the water from the still-flooded portion of the Sumas Prairie,” Braun said.


With the first of three storms currently bearing down on the province and two more on the way, the mayor said he’s concerned more flooding from the Nooksack River in Washington State could make its way north through Abbotsford and undo a lot of the work that’s been done to drain the prairie over the last week.


“Over the past week, we have put every effort toward ensuring that we are as ready as we can be should the worst-case scenario occur and we experience floodwaters moving north from Washington state again,” Braun said.


The mayor explained that the pump station can reduce water levels in the prairie by “six-to-eight inches per day” during dry conditions.


“This is, of course, impacted by any rainfall and runoff from the Vedder and Sumas mountains, but as I mentioned, we are still moving in a positive direction right now,” Braun said.


All of Sumas Prairie is under a “do not use water” notice because of water main breaches that may allow contaminated floodwater into the drinking water system in the area.


Those breaches are underwater in the eastern portion of the prairie, according to Braun. Repairs to those breaches and environmental assessments of the flooded areas cannot be completed until all of the floodwater recedes, the mayor said.


He said additional pumps have been brought in to help drain water from the former Sumas Lake bed faster, but they have a much lower capacity than the Barrowtown Pump Station.


“They pump 25,000 gallons a minute, which is a small fraction of what the Barrowtown pumps (can do),” Braun said. “There are no pumps to replace Barrowtown or to get anywhere even close to what Barrowtown is pumping. They are going full-out. We have never run those pumps full-tilt for this long, ever, so we are fingers-crossed that they’re going to hold.”


The Barrowtown Pump Station is used to keep the former lake bed dry. It pumps water out of the Sumas Prairie and into the Fraser River. The station also has floodgates that hold back the Sumas River near where it meets the Fraser. Those gates were opened last week once the Fraser had receded enough to make doing so feasible.