US Congress goes into LOCKDOWN as pro-Trump protesters storm…

Amazon rigged search results to favor its own knock-off products, despite denials – reports 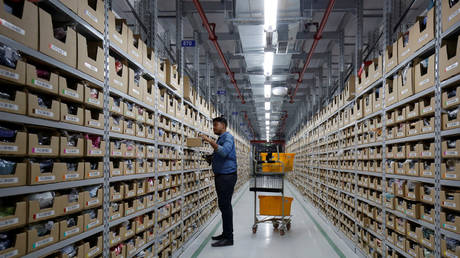 Amazon has been creating knock-off products from other sellers and then manipulating search results to promote its own copies on its Indian market site, Reuters reported, citing a trove of internal documents.

Despite numerous accusations, Amazon has always denied that it creates knock-off products and boosts its own sales through deliberate manipulation to the detriment of third-party sellers. Now, “thousands of pages” of internal documents obtained by Reuters suggest that these practices have been part of a “systematic campaign” all along – at least in India.

The trove of data, including emails, strategy papers, and business plans, paints a picture of how Amazon used its vast internal data to create copycat products and rocket them to the top of the search list.

According to Reuters, Amazon employees studied data on customer returns and reviews to pick products to replicate. One internal document from 2016 even says the company created its Solimo brand for this purpose on the Indian market. The Solimo brand then extended beyond India and scores of its goods are now also sold by Amazon in the US.

Amazon reportedly sought to partner with the makers of these “reference” goods, having realized they used “unique processes” that had a direct impact on quality, the document said. The manufacturers’ expertise was then apparently described in Amazon’s internal documents as “Tribal Knowledge.”

The online commerce giant has repeatedly denied engaging in these types of practices. In 2020, Amazon founder Jeff Bezos told the US Congress in sworn testimony that staff were prohibited from using data from individual sellers for the company’s own private-label brands. Before that, another executive testified that Amazon does not use this type of data in this way – or alter search results for its own benefit.

Documents seen by Reuters show, however, that it was all part of the company’s internal strategy in India – a strategy which was reviewed by two senior vice presidents at the time.

The method was deemed particularly viable for India – one of the company’s largest growth markets – having previously suffered million-dollar losses soon after entering in 2013. Focusing on Amazon’s own brands would make business there “sustainable in the long run,” a 2016 document suggests.

That year, Amazon set the goal of offering its own goods in 20-40% of all product categories on its India site, aiming to be “amongst the Top 3 brands in each sub-category that we play in.”

In the case of one Indian popular shirt brand – John Miller – Amazon copied its measurements down to the neck circumference and sleeve length, the documents show.

Smaller retailers were not spared. Piyush Tulsian, a New Delhi retailer selling computer accessories, told Reuters he noted a sharp drop in Logitech mouse pad sales, before discovering that customers who were searching for them were being shown ads for cheaper AmazonBasics pads.

Amazon told Reuters the claims are “factually incorrect and unsubstantiated,” but added that since the news outlet had not shared the documents with the company, it therefore could not “confirm the veracity or otherwise of the information and claims.”

It also maintained it does not rig search results, claiming they are based solely “on relevance to the customer’s search query, irrespective of whether such products have private brands offered by sellers or not.”

Amazon is already under investigation in India, Europe, and the US over alleged anti-competitive practices. Another Reuters report in February claimed Amazon had given preferential treatment to big sellers on its India platform, circumventing regulations designed to protect smaller sellers. The report prompted India’s main financial crime-fighting agency to seek documents and clarification from the company.

Some 2,000 Irish artists will earn up to €325 per week from the State next year as part of Basic Income Guarantee Scheme