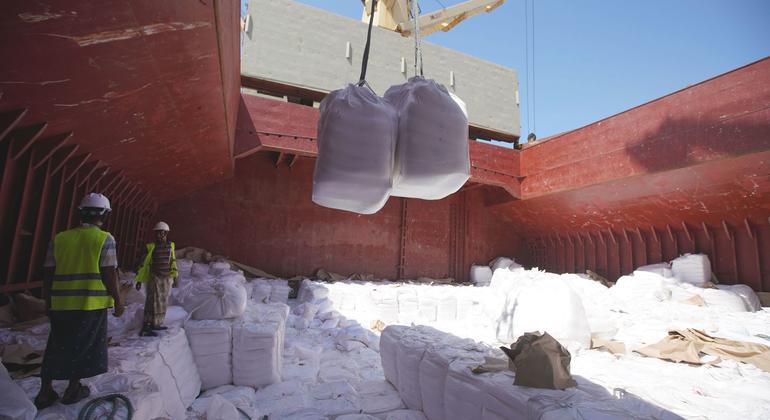 The development accompanied the renewal of the Black Sea Grain Initiative, which had been due to expire on Saturday.

“We are really very pleased on the extension of the Black Sea Grain Initiative,” said UNCTAD Secretary-General Rebeca Grynspan. “It’s very good news for the world, for the food insecurity crisis that we are going through, and this is an important contribution to solve the problem.”

Nearly 11.2 million tonnes of essential foodstuffs have been shipped from three Ukrainian ports as part of the agreement involving Türkiye, Ukraine, Russia and the United Nations, since it was signed on 22 July.

“We know that the crisis of affordability of today will be a crisis of availability tomorrow if we don’t face this challenge,” she added.

A negotiated solution to the “fertiliser crunch” which involves the UN World Food Programme (WFP) has been found, which will see a ship loaded with Russian fertiliser departing from the Netherlands for Malawi via Mozambique, next Monday.

“We have a model that is working, (that it) is a humanitarian activity,” Ms. Grynspan explained. “WFP is the one in charge of taking the fertiliser from the ports to the countries that needs the fertiliser. And this is a donation from Uralchem/Uralkali – that is a Russian company.”

Responding to questions about the reopening of an ammonia pipeline from Russia to the Black Sea, the UNCTAD Secretary-General said that she was “optimistic that this could happen”, with the agreement of the Ukrainians and Russians.

“Ammonia is included in the Black Sea Grain Initiative – explicitly – in the Memorandum Of Understanding with Russia”. She said this meant a new agreement was not necessarily needed.

“The objective is to ease the pain that many developing countries are feeling because of food and fertilisers, energy and financial crisis that we are living right now, that the Secretary-General has called the perfect storm.”

Ambassador of Oman to China: Oman and China join hands to welcome a bright future