Children dropped over US border wall

THE MAN WHO designed the beautiful blue jerseys worn by the Republic of Ireland men’s team in their 4-0 victory over Qatar says the occasion was a “unique moment for him.” 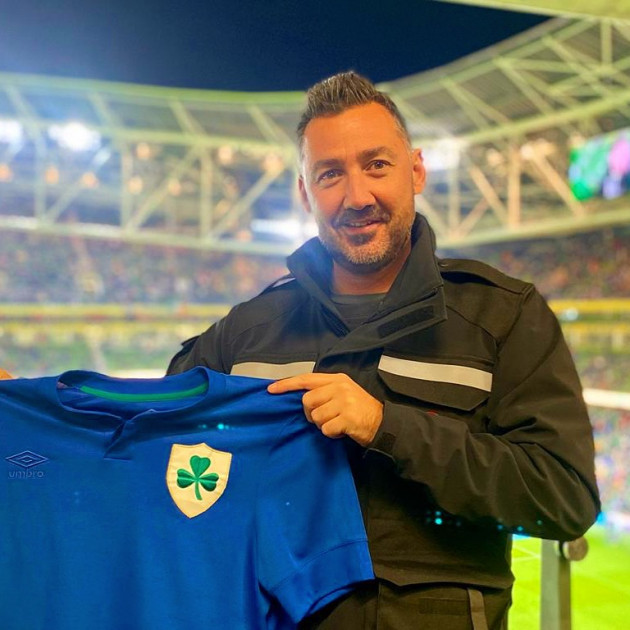 It was an inspiring night for Irish soccer fans, as Stephen Kenny’s side produced a superb display to pick up their second win on the bounce this week, and their first home victory of the Kenny era.

The deviation from Ireland’s traditional green coloured kit to blue was a commemoration effort to mark the centenary of the FAI, which was founded in 1921. Blue was actually the colour worn by Ireland in their first official international against Bulgaria at the 1924 Olympics.

But there’s even more history behind this special event.

Jonathan Courtenay, the Managing Director of JACC Sports Distributors, first considered the prospect of providing a blue kit for the national team back in 2016. In an interview with The42 at the time, he explained how Ireland’s jersey colour transitioned from St Patrick’s blue to St Patrick’s green over time.

He also suggested that there was an opportunity to explore the possibility of bringing blue back to the colour scheme of the Ireland kit for the centenary. And on Tuesday night, he watched his vision come to life in front of a Covid-capped sell-out crowd at the Aviva Stadium.

“I always had it in my head that I wanted to do the blue shirt because I had come across the story,” he tells The42.

“We had a picture of the programme and the team line-ups from that 1924 Olympic Games in Paris. It confirmed that Ireland wore blue and I thought it would be amazing to commemorate at some point in the future, especially considering that it’s so different.

“So it was in my head for a long time, but in terms of the design process on the actual kit, we probably would have started that around 18 months before the jersey came to market. Although it was always going to be designed and looked at through a retrospective lens, in terms of giving a nod to the past, you’re still going to use a modern fabric.

“You’d always wait until closer to the time, so you’re always using the latest technology but with that nice kind of throwback twist in terms of the detailing.”

Umbro, the manufacturer of Ireland’s kits, released a teaser reveal of the special centenary gear back in August. Courtenay noticed some negative reaction to the design at the time, but was confident that the live viewing of the final product would alter people’s views.

His prediction proved to be an accurate one as fans raved about the deep blue look on social media. The fact that it coincided with a super performance by the home side added another layer of significance to the occasion.

“It looked initially like there was a lot of negativity around the idea of Ireland wearing blue,” Courtenay continues. “I don’t mean this in a patronising way but there was a bit of education needed in terms of people not actually knowing that Ireland wore St Patrick’s blue originally.

“A couple of weeks down the line after the pre-sale went out and all the images, and ultimately when it was seen on the pitch the other night, it’s been an absolutely phenomenal reaction and the jersey is sold out since half-time [of the Qatar game].”

Courtenay added that the blue kit is part of the women’s rota, meaning Vera Pauw’s side could well be donning the shirt in the future.

As for whether or not Kenny’s charges will retain the blue outfit for away games down the line, Courtenay reckons that it could be a possibility.

“Everything we do for the men’s team, we will absolutely try and do for the women’s team which is a derivative thing that we wanted to get behind for a long time. All the kits are available in women’s and they will hopefully wear it soon as well.

“In terms of the blue becoming an away colour, I don’t think there’s any reason why it couldn’t become a more regular part of the kit rota now that we’ve brought it back. But the only thing with that is, with Uefa and Fifa’s kit clashes, having a green home kit and a blue away kit wouldn’t necessarily give you that point of difference that you need for playing other teams.

“Whether they wear red or yellow or whatever colour, you need a more distinctive difference, so I think the blue might possibly become more of a goalkeeper’s jersey or something like that.

“Or maybe a third kit going forward, but I still think you need something distinctly different from the home green to the blue away.”

More than just your name on vaccine QR codes