= ‘Antifa Teacher’ who wanted to make mini-revolutionaries in 180 DAYS placed on leave, school board flees raging Sacramento parents
Skip to content
You are Here 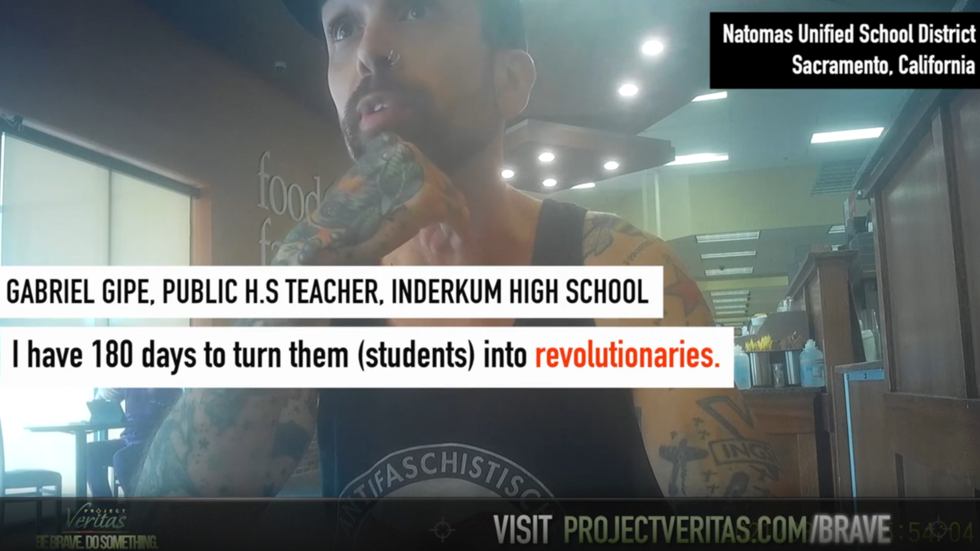 A California high school “Antifa teacher” was placed on paid leave “for his actions in the classroom” after a fraught school board meeting. He admitted to working on turning kids “into revolutionaries” in a Project Veritas video.

Gabriel Gipe will be removed from his post as an AP government teacher at Inderkum High School, the school board announced on Wednesday. He was placed on paid leave that morning after allegedly violating the Natomas Unified School District’s school policies regarding displaying political material and advocating for political outcomes. After a hidden-camera video emerged in which he boasted about turning Sacramento’s children into mini-me revolutionaries, nearly half a million angry parents and viewers – either online or in person – turned out to air their grievances.

"I have an ANTIFA FLAG on my[classroom] wall"

"I have 180 DAYS to turn them into REVOLUTIONARIES"

'There's a reason why these kids[GenZ] are becoming FURTHER LEFT' pic.twitter.com/NiwpArVAyJ

Gipe has earlier bragged about indoctrinating kids into the ways of Antifa in a clip released by muckraking conservative journalism outlet Project Veritas. In the ensuing uproar, the school revealed it would be “taking the legally required next steps to place the teacher on unpaid leave and fire the teacher.” The subsequent Wednesday board meeting, which was livestreamed online, was swarmed with angry parents, who clearly wanted more than the removal of one bad teacher.

One parent complained that “without warning, [her] daughter’s Constitutional law class was changed to a Social Justice class,” while others likened the lack of accountability to school board scuffles over mask wearing and sex ed.

About 70 people currently staged in front of the Natomas Unified School District offices to protest the methods of an AP History teacher at Inderkum High School. The district earlier today announced plans to terminate the teacher. pic.twitter.com/62PzfNBx9d

“Parents are already freaked out over inappropriate sex ed and critical race theory, and now they find out that their kids are being indoctrinated and recruited by a teacher,” Marilyn Jackson, president of Christian group Pray4SafeSchools, lamented.

One student’s father even denounced the offending teachers as “evil,” declaring “there is no excuse for communism on American soil” and calling for a criminal probe. “I look at [the schoolchildren’s] faces and they are pure innocence, pure love!” he shouted, raging that “these evil people are putting stuff into them! This has got to stop.”

If you cannot protect your child, there is no hope of being alive. There is no need to even have the United States.

During the Project Veritas video, Gipe snarked that he “has 180 days to turn [the children] into revolutionaries,” a claim he has reportedly delivered to at least one class of students themselves. Asked by the Project Veritas reporter how he was so certain he could indoctrinate his charges in a single school year, he responded, “I scare the f**k out of them.”

Gipe “wanted to make back to school uncomfortable,” hence a decision to paper his classroom wall and ceilings with Antifa flags and Mao portraits and give extra credit for attending protests. He also reportedly bought a series of rubber stamps featuring the faces of famous dictators alongside catch phrases to be used on grading assignments, and acknowledged that to really accomplish his goals, “you need to retrain the way people think.”

Gipe insisted he isn’t the only individual “recruiting” schoolkids for Antifa, though his ideological fellow-travelers on social media were quick to disavow his actions. “There’s a way to present revolutionary thought to students but that is absolutely not it,” one Twitter user bemoaned. Per his lawyer’s advice, Gipe told fellow Antifa to steer clear of the board meeting. However, a mother at the school agreed that Gipe was not alone in his conversion quest, explaining that there was “subtle indoctrination” going on in other classes too.

“All the stuff we’ve been saying, they’ve admitted to,” dumbfounded Periscope user OreoExpress marveled while waiting in a long line to get into the meeting. Comedian Rob Schneider joked that he “never in [his] life thought [he] would watch an entire school board meeting,” but that this one was “absolutely riveting.”

I never in my life thought I would watch an entire school board meeting.
This is absolutely riveting.
The sleeping giant of American Common Sense and decency has been awakened. https://t.co/GbuOc675yf

And he wasn’t the only one to think so, with close to half a million people tuning in on Periscope alone to watch the drama unfold. Indeed, the drama got so hot that school board members took a recess, returned, took another recess, and ultimately sneaked out the back door before anyone realized what they were doing.