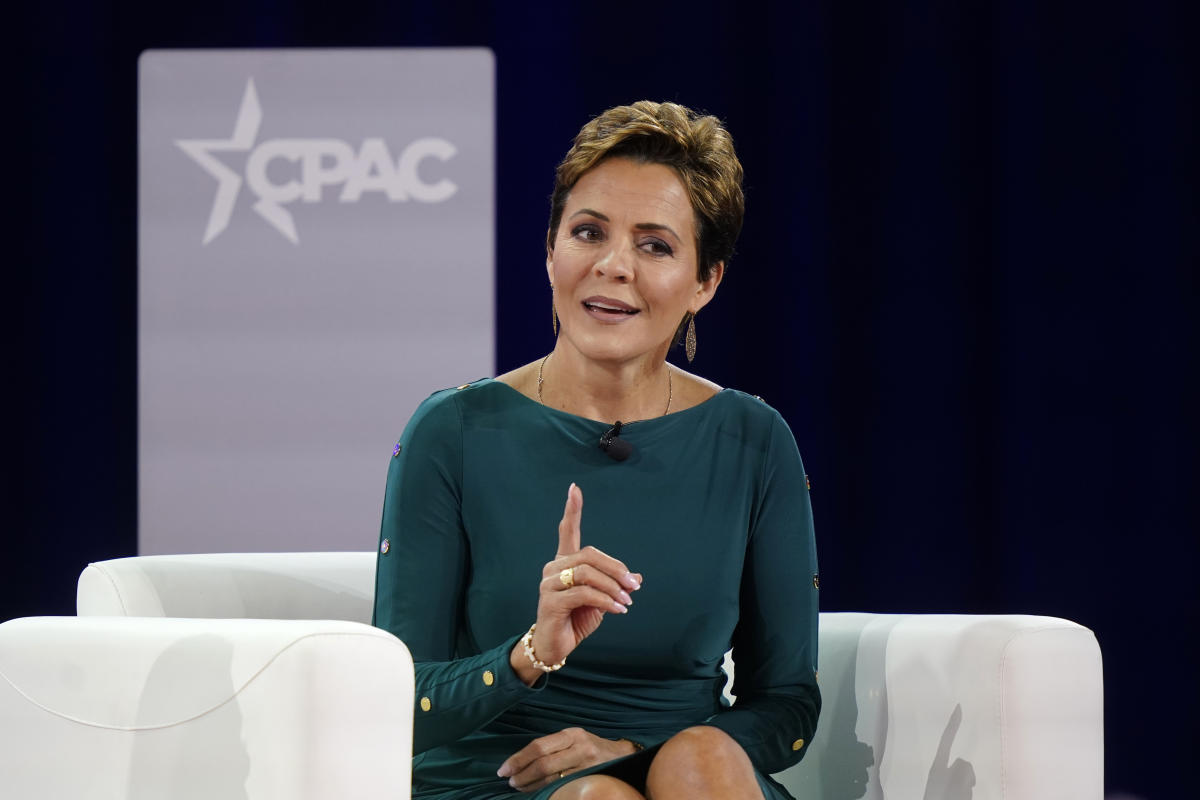 Arizona Republican gubernatorial candidate Kari Lake is misrepresenting the voting record of her opponent, Democrat Katie Hobbs, charging in a video released this week that her work in government shows Hobbs is “Anti-American and Un-Arizonan.”

In a 3-minute social media video, set to dramatic music and featuring patriotic visuals, Lake claims that if Hobbs is elected governor “your kindergartner wouldn’t learn the Pledge of Allegiance, but your precious 5-year-old would be taught about sex.”

But her suggestion is built on misrepresentations of Hobbs’ votes and the content of various Arizona education bills.

Lake’s campaign did not respond to a request for comment. Sarah Robinson, a spokesperson for Hobbs, said in a statement that “Kari Lake’s latest political theater is just another distraction from her own extreme positions.”

Here’s a look at the facts.

LAKE: “As a legislator, Hobbs actually voted to block the Pledge of Allegiance, our National Anthem, our Constitution, the Declaration of Independence and even the Mayflower Compact from being taught to the next generation of Americans right here in Arizona.”

THE FACTS: Lake is distorting Hobbs’ voting record. When Hobbs was a state senator, she voted against Senate Bill 1289, which amended an existing law listing materials that teachers and school administrators are allowed to read or post in school facilities. That list includes the Pledge of Allegiance and the National Anthem, among other documents. The bill added the Arizona state motto, “Ditat Deus,” which means God enriches, to the list. It also spelled out the wording of the national motto, adding “In God we trust,” to the list. No other changes were made.

The bill, which was approved by lawmakers and signed into law, did not affect the portion of the law that permits school staff to read or post the Pledge of Allegiance, the National Anthem, or the other documents Lake identified, experts say.

“It’s an incorrect claim. It’s a charge that’s untrue,” said Paul Bender, a law professor at Arizona State University. “She voted simply not to add to those things, ‘In God we trust’ and ‘God enriches’.”

“The state statute already set forth the items that may be read or posted in school buildings, including the National Anthem,” said Paul Bentz, Republican pollster in Phoenix. “None of those items were in question.”

If the bill had failed to pass, the original law allowing school staff to read or post materials such as the Declaration of Independence in schools would not have changed, Barrett Marson, a Phoenix-based Republican political consultant wrote in a text message to The Associated Press.

In a tweet on Wednesday appearing to double down on her previous accusations, Lake added another claim: that Hobbs opposed displaying American flags. As evidence, she cited Senate Bill 1289, Senate Bill 1020, and Senate Bill 1152. An AP review of these bills found no instance in which Hobbs voted against displaying the flag in schools.

LAKE, on what would happen in Hobbs’ Arizona: “Your precious 5-year-old would be taught about sex.”

THE FACTS: As a state senator, Hobbs did sponsor a bill to require school districts to teach sex education in grades K-12. The bill, which didn’t pass, would have resulted in parents being required to proactively remove their child from being taught the curriculum, rather than opting in to participate.

However, to claim that it would have led to 5-year-olds being taught about sex leaves out important context.

The bill, introduced in the 2016 legislative session, would have mandated that the sex education program for kindergarten through 12th grade be “medically accurate, developmentally accurate and age-appropriate.” It defined age-appropriate as “topics, messages and teaching methods that are suitable to particular age and developmental levels, based on cognitive, emotional, social and experience levels of most students at that age level.”

At the developmental stage of a 5-year-old, age-appropriate sex education largely involves learning about the concept of “good touch, bad touch” — not learning about sex as a physical act, experts say.

“At the kindergarten level, age-appropriate sex education means things like learning the correct names of body parts, which has been found to be a protective factor against sexual abuse,” said Nora Gelperin, director of sexuality education and training at Advocates for Youth, an organization that supports comprehensive sex education. “It can also mean teaching kids that they need permission to touch someone else — the beginning of learning about personal boundaries. At this age, kids may also be taught to identify a safe person to talk to if they’re in trouble. All the lessons are in service of ensuring safety and respect.”

Arizona is one of just five states that require parents to “opt-in” to sex ed classes, rather than having an opt-out system. State law bans sex education before 5th grade, and schools are not required to offer the courses at all. Students younger than 5th grade can only be offered instruction on HIV and sexual abuse prevention.

EDITOR’S NOTE — A look at the veracity of claims by political figures.