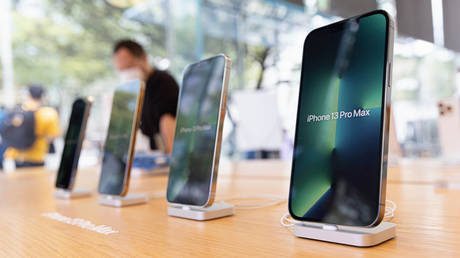 US tech giant Apple is reportedly planning to slash its iPhone production goals in 2021 amid growing shortage of semiconductors around the world. The news has triggered an immediate 1.2% drop in the company’s share value.

The Cupertino-based corporation expected to produce 90 million ‌iPhone 13‌ models in the final three months of the current year, but had to reduce the target by as many as 10 million units due to the shortages of vital components, according to people with knowledge of the matter as quoted by Bloomberg.

The news reportedly forced Apple to instruct other parts of its manufacturing pipeline to cut back as well. Shares of Apple dropped 1.47% to trade at $139.43 in after-hours trading after losing 0.9% in the regular session.

The global shortage of semiconductor chips has been sabotaging major industries, hitting hundreds of companies, from producers of electronics to automakers. Analysts expect the crisis to extend into next year and potentially beyond.

Driver, 54, charged with killing retired lecturer, 69, who caught Covid in hospital and died after ‘hit-and-run’