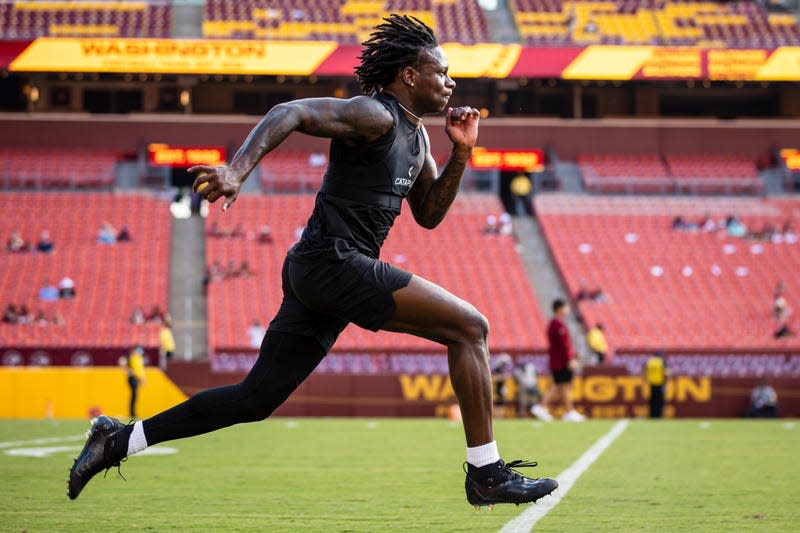 When you buy a luxury car, you put the highest grade of gas in the tank because premium car engines are only as good as the fuel they burn. Burning 87 octane in a supercar that you just paid a lot of money for is a colossal waste of cash and fuel.

This is a story about football.

Specifically, it’s a story about one NFL team—the Arizona Cardinals—that just plunked down $230.5 million for a quarterback, Kyler Murray, in hopes he’d drive them all the way to a Super Bowl. But Murray’s best weapon—his high-octane fuel, wideout Deandre Hopkins—is suspended for the first six games of the upcoming season. So the Cardinals this offseason the Cardinals opted to fill up their offense with a slightly-less-explosive option by signing former Baltimore Ravens receiver Marquise Brown. Brown, they figured, would at least keep the car running smoothly as a first option for Murray in Hopkins’ absence, and when the latter returned, the team could put the pedal to the floor.

The problem is Brown, in a nod to his football player-turned-rapper Antonio Brown—took that metaphor a bit too literally, getting arrested for criminal speeding on Wednesday after he was clocked doing 126 miles-per-hour on a highway near Phoenix. For clarity, our sister site Deadspin reports that in Arizona, you’ve gotta be doing at least 85 to get placed in bracelets instead of just getting a ticket in Arizona and Marquise Brown was clocked a full 41 miles over that. Criminal speeding in the state comes with a maximum 30 days in the hoosegow and a $500 fine.

Marquise Brown’s arrest could in theory leave the Cardinals’ offense running on regular to start the season, should the NFL decide to impose its own discipline on Brown, which you should know by now doesn’t require a player to face a criminal charge, much less a conviction. The league’s personal conduct policy allows for a player to be suspended if they engage in “conduct that poses a genuine danger to the safety and well-being of another person.” If he were suspended, it’d likely be for a short time given Marquise Brown, unlike his famous cousin, hasn’t had any smoke with the league’s disciplinary apparatus in his career.

Antonio Brown hasn’t played an NFL game since he stripped off his jersey and walked off the field in the Buccaneers’ penultimate regular season game of the 2021 season on January 2. The former Pittsburgh Steelers, Las Vegas Raiders, New England Patriots and Tampa Bay Buccaneers receiver who was last seen doing whatever this is on stage at the Rollin’ Loud music festival, paid a $426 fine for driving his Porsche more than 100 miles-per-hour in a 45 mph zone just north of Pittsburgh in 2019.

Basically twitchy route-running, soft hands and lead feet must run in the family.

Postgame analysis: Jags start preseason with a 27-11 loss to Raiders