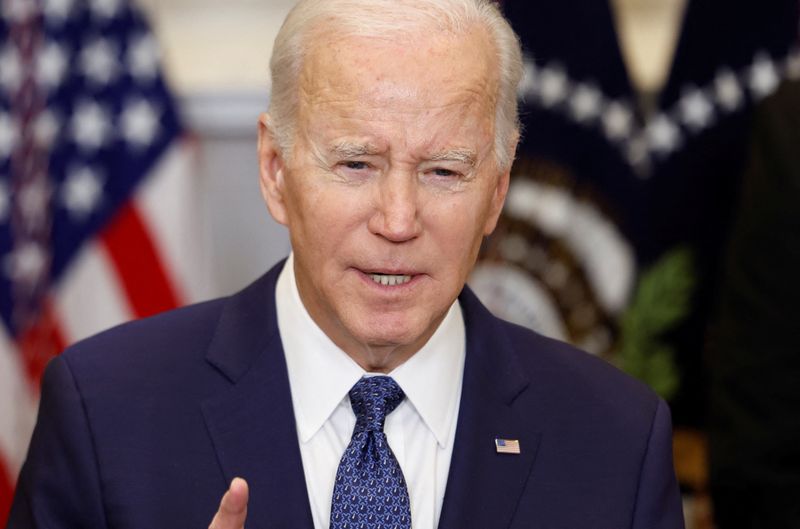 WASHINGTON (Reuters) – President Joe Biden will use a speech at a steamfitters union hall on Thursday to launch an attack against Republicans who control the U.S. House of Representatives, saying that some of their proposals are dangerous for the U.S. economy.

Biden, believed to be laying the groundwork for a bid for re-election in 2024, will visit the union hall in Springfield, Virginia, a Washington suburb.

Republicans seized control of the House by a narrow margin in last November’s midterm elections and in the weeks since they took power Biden has sought to portray them as out of step with the concerns of Americans.

A White House official said Biden will seek to tie House Republicans to former President Donald Trump, the Republican who Biden ousted in the 2020 election. Biden will refer to them as beholden to Trump, who used a “Make America Great Again” slogan.

“The president will outline the biggest threat to our economic progress: House Republicans’ MAGA economic plan,” the official said.

Biden has already warned he would veto Republican proposals on the strategic petroleum reserves, cutting taxes on corporations and a national sales tax should they reach his desk. Biden’s Democrats control the Senate.

It will be Biden’s first major economic speech of the year and he will use it promote his record on the U.S. economy, including the creation of more manufacturing jobs and a low unemployment rate.

The economy under Biden has been gripped by inflation but that may now be ebbing.

Biden will say his policies “are laying the foundation for strong and stable growth,” the White House official said.

HONG KONG (AP) — About 20% of the Americans in Hong Kong have left for various reasons over the past...

By Steve Holland WASHINGTON (Reuters) – President Joe Biden will use a speech at a steamfitters union hall on Thursday...

How much do winners win per round at the 2023 Australian Open?

Curious to know the sum of the Australian Open prize money? Here's a look at how much the winners get...

Broadband customers hoping to beat looming price hikes are being ‘trapped’ by providers hitting them with punishing exit penalties if...

How might Patrick Mahomes be limited against the Bengals? Here’s what medical pros with high-ankle sprain experience say.