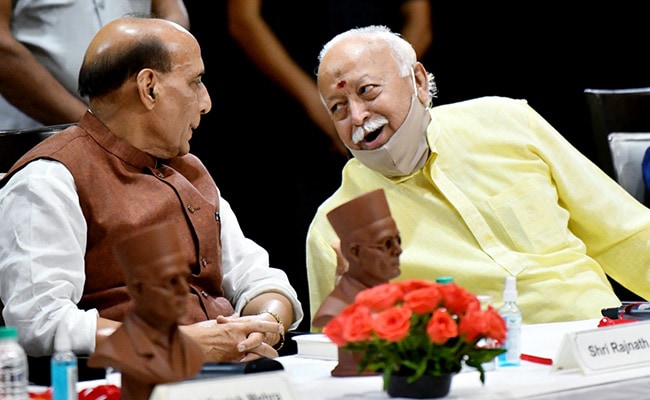 If there’s one thing that the Congress has, and the BJP needs, it is icons of the national movement. The BJP’s own heroes had a dubious role during the Raj, often opposing the anti-colonial struggle at key moments. This creates a big hole in the dominant discourse in today’s public culture that equates nationalism with Hindutva.

The one anti-colonial figure Hindutva can claim as its own is Vinayak Damodar Savarkar. And since the late 1990s, successive BJP-led governments have been trying to project him as a colossal figure of the national movement, one who could have rivalled Gandhi, kicked the British out earlier and stopped the partition.

Savarkar’s figure lends itself to myth-making. He was arrested in Marseilles in 1910 and almost managed to escape from the ship where he was held, supposedly by bending the iron bars of a porthole. The British found him dangerous enough to lock him up in the infamous Cellular Jail in the Andamans for 10 years. He spent another three years in the Ratnagiri jail in Maharashtra, and was only released on the condition that he would never step outside the district. That is how it was for another 13 years, till BG Kher, the newly-elected Congress Premier of Bombay, released him unconditionally.

This story of heroic resistance, much amplified in the mythopoeic imagination of India’s right, was punctured when it came to be known in 2002 that Savarkar had written several mercy petitions to the British, asking to be forgiven and promising to “serve the government in any capacity they like” if he were to be released. This became a perfect stick with which to beat Hindutva’s most muscular hero. Savarkar’s clemency petitions not only make him look like a wimp, but also a collaborator with the Raj.

One way to counter this is to present the petitions as temporary tactics in a war of attrition. Apologists for Savarkar’s apologies claim that he was trying to trick the British into releasing him so that he could renew his campaign to oust them. Defence Minister Rajnath Singh’s claim – that Savarkar wrote the clemency petitions on Gandhi’s advice – is part of this project of justifying the appeals for mercy. If Gandhi can be shown to have come up with the idea of writing clemency petitions, then Savarkar becomes just a vessel for this tactic, perhaps even a reluctant one.

Of course, sticklers for facts will point out that Gandhi’s ‘advice’ came in a letter on January 25, 1920, written to Savarkar’s brother, Narayan; by this time, Savarkar had already written three clemency petitions. His first petition was written in 1911, within a month of being transported to Port Blair, when Gandhi was not even in India. Gandhi did meet Savarkar in London in 1909, but that was before the latter was arrested.

If Savarkar did heed Gandhi’s advice, he went way beyond it in his fourth clemency petition written in March 1920. Gandhi had suggested to Savarkar’s brother that he should write “a brief petition setting forth the facts of the case bringing out in clear relief the fact that the offence committed by your brother was purely political.” Savarkar’s own petition said “…far from believing in the militant school…I do not contribute even to the peaceful and philosophical anarchism…and recently I have publicly avowed my faith in and readiness to stand by the side of orderly and constitutional development.”

Although Savarkar’s petition was rejected, once again, he broadly stuck to his promise of not agitating against the British. His politics focused on working with the British state to help get military training for Hindu Mahasabha members. “Hinduize all politics and militarize Hindudom,” he wrote, “and the resurrection of our Hindu Nation is bound to follow it as Dawn follows the darkest hour of the Night.” In 1942, when the Gandhi-led Congress demanded that the British Quit India, Savarkar issued “definite instructions” that all “Hindu Sanghathanists in general holding any post or position of vantage in the government services should stick to them and continue to perform their regular duties.”

Yet, none of these facts matter. Rajnath Singh’s manoeuvre, the new books on Savarkar, the propagation of the revisionist history of Savarkar’s legacy through TV shows and social media – they all endeavour to create a new set of ‘facts’. These half-truths will be used to defuse Savarkar’s embarrassing history of repeated apologies and appeals for mercy.

Savarkar has a much murkier connection with Gandhi – his assassination. One of the conspirators, Digambar Badge, who turned approver, had pointed to Savarkar’s complicity in the assassination plot. According to Badge, on January 14, 1948, he had accompanied Nathuram Godse and co-conspirator Narayan Apte to meet Savarkar at his residence. Godse and Apte went in to Savarkar’s room to meet him, while Badge waited outside. As they returned, Savarkar followed them out and said “yashaswi houn ya” (Be successful and come). As they left Savarkar Sadan in a taxi, Apte told Badge that Savarkar had said “Gandhi’s 100 years are over, there is no doubt the work will succeed.” A fortnight later, Godse would fire three shots into the frail chest of the Mahatma, shooting him dead.

Savarkar was acquitted on lack of evidence – the police found no corroborating evidence against him. Badge’s testimony was rejected even though the judge believed it, saying “It is difficult to conceive of anyone memorising so long and so detailed a story if altogether without foundation.” Yet, junior lawyers on the prosecution team suspected that the case against Savarkar had been deliberately weakened on the instructions of Morarji Desai, the Home Minister of Bombay State, and Sardar Patel. Desai was worried what Savarkar’s arrest would do in the communally-charged atmosphere of the time. Patel might have wanted to use Savarkar to defang the Hindu Mahasabha and get its cooperation in key princely states where it was strong.

The government had suspected Savarkar’s involvement in the first failed attempt on Gandhi’s life, and he had been placed under surveillance. When Desai was asked in court, by Savarkar’s defence lawyers to explain why Savarkar was under watch, he reportedly replied, “Shall I give the full facts? I am prepared to answer. It is for him (Savarkar) to decide.” At that point, Savarkar reportedly signalled to his lawyers to withdraw the question.

Despite his acquittal, Savarkar remained persona-non-grata for the Nehru Government and the PM refused to share a dais with him during the centenary celebrations of the Revolt of 1857. By the time Nehru died, Savarkar himself was close to death. By then, the Congress had established its complete hegemony over India’s politics. It had also perfected the art of being a political amoeba, shifting shape, engulfing and incorporating different opposing elements within itself. So the Congress project of writing the history of the Indian nation no longer needed to exclude Savarkar. He could be defanged and re-presented as a nationalist who disagreed with Gandhi, but was a patriot nevertheless. This is what allowed Indira Gandhi to issue a postage stamp in his honour in 1970, and later call him a “remarkable son of India.”

It is no secret that the Congress government, established after independence, had nothing to do with Gandhi’s vision of what a free India should be. Gandhi opposed centralisation, Nehru implemented it. Gandhi wanted cottage industries, Nehru promoted heavy industrialisation. Gandhi was a critique of modernity, its institutions and its traditions, including modern medicine. Nehru was a hard-core modernist.

Yet, the post-independence state created the cult of Gandhi, the icon who could not be questioned. His austere and benign figure represented the ‘people-in-abstract’ in whose name the elite ruled. Public policy could be designed entirely at odds with Gandhi’s own philosophy as long as the ‘Mahatma’ could stand-in as a personification of the nation’s ethos.

The new muscular nationalism of the BJP, where Hindutva defines the dominant ideology of the state, through which it reproduces the rule of the new mercantile elites, requires its own iconic representation, a personification in a heroic figure. A reconstructed Savarkar, shorn of his contradictions (he was an atheist, opposed religious ritual, backed socialism), and his embarrassing history of repeated apologies is ideally suited to occupy that space.

The project to legitimise his mercy petitions by placing their source in Gandhi is in a way the inverse of what the Congress did with Savarkar’s legacy in the mid-1960s. It is the beginning of a process to displace Gandhi as the leading figure of the national movement, and make him a dissenting fellow-traveller of Hindutva, who betrayed it at the last moment by agreeing to Partition. Gandhi’s assassination then becomes a legitimate act, a way to seek closure for a historical wrong. It is the final stage of the emergence of the ‘BJP system’, where the BJP can incorporate within itself two extremes – those who follow Gandhi and those who worship his murderers.

Disclaimer: The opinions expressed within this article are the personal opinions of the author. The facts and opinions appearing in the article do not reflect the views of NDTV and NDTV does not assume any responsibility or liability for the same.