Should Bears trade No. 1 pick? History tells us ... 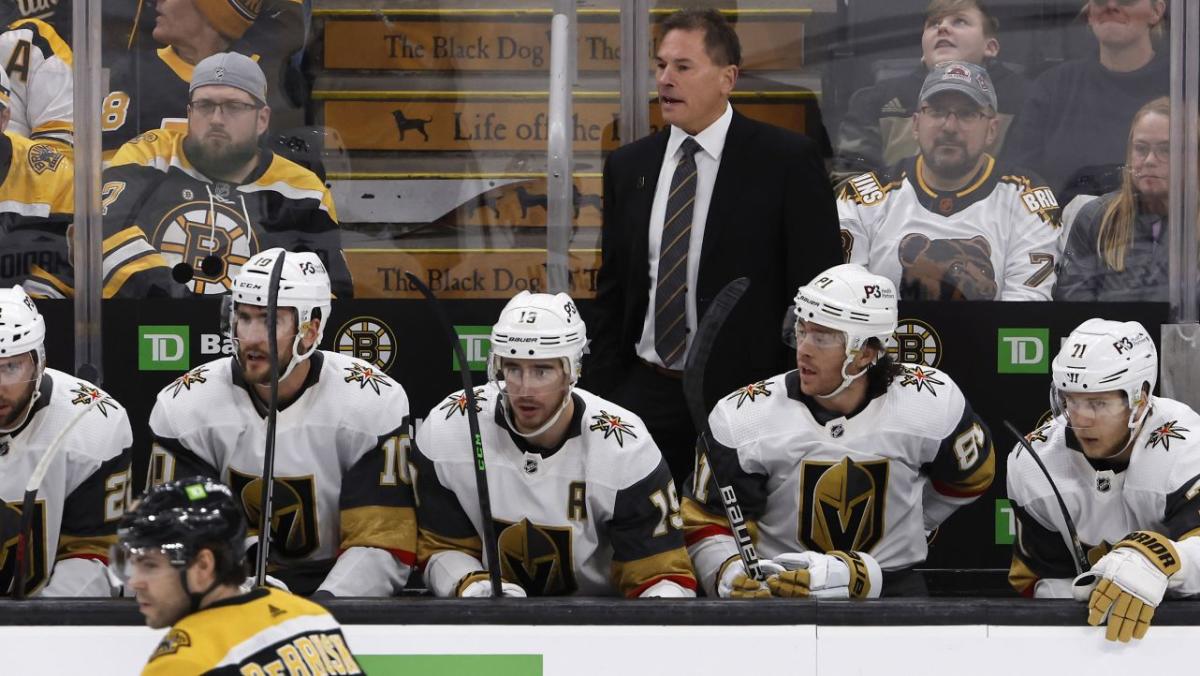 BOSTON — Bruce Cassidy’s return to TD Garden was hyped up as a potential Stanley Cup Final preview and it didn’t disappoint.

The Vegas Golden Knights took a commanding 3-0 lead early in the second period, but the Bruins stormed back with two goals in the second period and a power-play tally in the third period to force overtime. After a scoreless OT period in which Boston couldn’t score with the man advantage, former Bruin Reilly Smith won the game for Vegas in the shootout.

The 4-3 defeat ends Boston’s record-setting home win streak to begin the season at 14.

Golden Knights rookie goalie Logan Thompson made 40 saves for his eighth road victory of the season, while Bruins netminder Jeremy Swayman made 21 stops.

The B’s begin a three-game road trip Wednesday against the Colorado Avalanche. But before we look ahead to that matchup, here are four takeaways from Bruins-Golden Knights.

The Golden Knights came out with a ton of energy, which was not surprising given the importance of this game to their head coach. Vegas was faster, sharper and more opportunistic than Boston over the first 20 minutes and its effort was rewarded just 96 seconds into the game when Paul Cotter put his team on top.

The Bruins couldn’t win possession of the puck behind the net and Cotter was left all alone in the slot for a great scoring chance that he buried.

The Golden Knights doubled their advantage less than four minutes later when David Pastrnak coughed up the puck with an absolutely brutal turnover that Jonathan Marchessault capitalized on. Swayman made a good save on the initial shot but couldn’t thwart the rebound.

The Bruins have been a good first-period team all season, giving up a league-low 13 goals in the opening 20 minutes through their first 23 games. They were unable to maintain that early-game success Monday night.

The Bruins broke the league record for the most consecutive home wins to begin a season with 12 and extended that streak to 14 before the Golden Knights put an end to Boston’s historic run.

The B’s also were just the third team in league history to win 21 straight home games between seasons, including the Stanley Cup Playoffs.

Before Monday night, the Bruins’ last loss at the Garden was April 14 of last season (a 3-2 defeat to the Ottawa Senators). Even though the win streak is over, the B’s still have a 22-game point streak at the Garden dating back to 2021-22.

The Bruins will try to create a new home win streak when they return to Boston for a five-game homestand that begins Dec. 13 against the New York Islanders.

The Golden Knights lost their cool early in the third period and took two penalties over a 25-second span, giving the Bruins a 5-on-3 power play for 1:35.

Although the B’s failed to score during that two-man advantage, right after the first penalty expired Taylor Hall scored from right in front of the net on his own rebound to tie the score 3-3.

The Bruins power play has now scored in 10 consecutive games. This unit entered Monday with the second-best power play at 29.5 percent, behind only the Colorado Avalanche at 32.5 percent.

Here’s a look at this dominant stretch for the Bruins power play:

The Bruins are 15-of-42 (35.7 percent) on the power play over their last 10 games, and those 15 power-play goals are tied with the Lightning for the league lead during that span.

The B’s have not been a dominant 5-on-5 team this season with just 21 goals in 24 games. Their power play has saved them over the last couple weeks. It’s safe to say a 35.5 percent success rate on the power play is not sustainable, so Boston will need to figure out its 5-on-5 issues soon.

There was no homecoming for Jack Eichel on Monday night.

Eichel is having an excellent season for the Golden Knights with a team-leading 29 points (13 goals, 16 assists) in 26 games, but he suffered a lower body injury in last Saturday’s win over the Detroit Red Wings and didn’t play versus the Bruins.

Eichel back among NHL’s elite as Vegas prepares for showdown vs. Bruins

The North Chelmsford, Mass., native and former Boston University standout hasn’t played against the Bruins in Boston since Dec. 19, 2019. Eichel has dealt with neck and back issues over the last two years, but aside from his recent lower body injury, he’s been pretty healthy this season.

The 26-year-old center won’t return to TD Garden until the 2023-24 campaign unless the Golden Knights and Bruins meet in the 2023 Stanley Cup Final.

Can Trump Count on Evangelicals in 2024? Some Leaders Are Wavering.

Ralph Reed, the founder of the Faith and Freedom Coalition, a conservative advocacy group, arrives at First Baptist Church in...

The mother of a sex offender who is missing with an aristocrat’s daughter has claimed they ‘married in secret’ and...

Sullivan from Israel: We will never allow Iran to acquire a nuclear weapon

During his visit to Israel, US National Security Adviser Jake Sullivan confirmed Thursday that the United States will never allow...