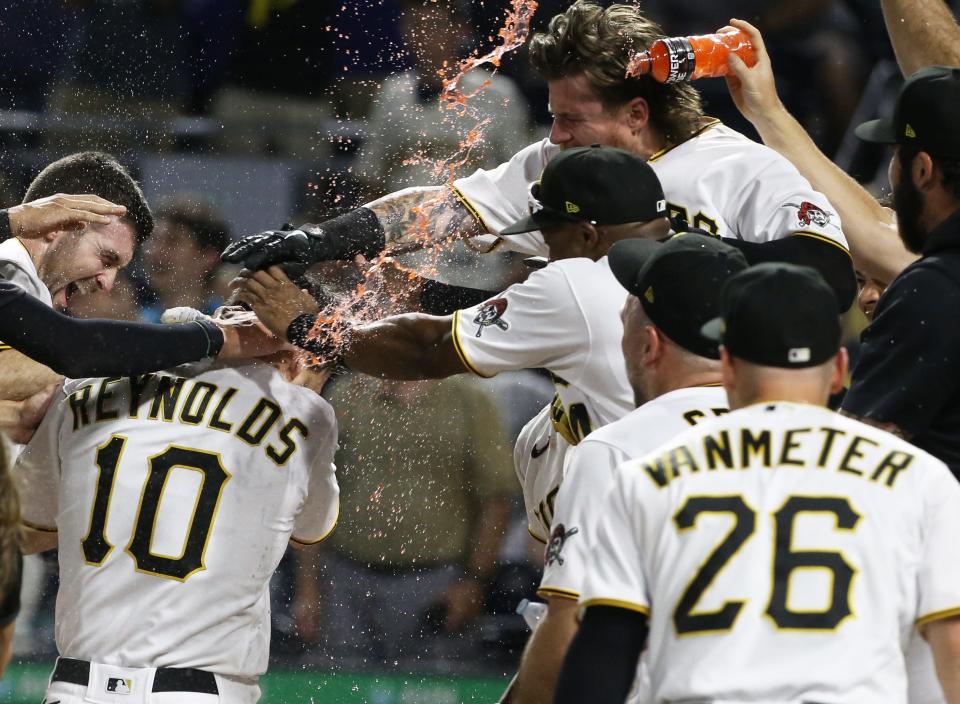 PITTSBURGH – In what has been a perplexing week off the field and a disappointing week on it, the Milwaukee Brewers received another crushing blow off the bat of Pittsburgh’s Bryan Reynolds Wednesday night at PNC Park.

Leading up to Tuesday’s trade deadline, the Milwaukee Brewers were sellers as much as they were buyers, with the few upgrades they did choose to make centered on bolstering their bullpen depth to counteract the subtraction brought about by trading Josh Hader.

The early returns on those moves weren’t too kind to the Brewers.

On a day that began by designated one of the array of pitchers acquired by the Brewers in recent weeks, Dinelson Lamet, for assignment without appearing in a game for the team, the events that unfolded in the late innings of the game a handful of hours later only made things tougher to swallow.

The knockout punch was delivered by Reynolds in the form of a walk-off homer leading off the bottom of the ninth against Brewers reliever Devin Williams, who had been utterly dominant over 30 consecutive scoreless outings and was pitching in the spot that, previously, would have typically been occupied by Hader. The blast gave the Pittsburgh Pirates an 8-7 victory in a game Milwaukee led, 4-0, and ensured the Brewers a series loss against the division’s last-place team.

“Devin has been so, so good,” Brewers manager Craig Counsell said. “There was a run coming somewhere. In spots that he pitches, it’s always meaningful and impactful, and unfortunately it happened tonight.”

But even before Williams’ rare misstep, the Pirates tied the game in the sixth against lefty Jake McGee, who was signed as a free agent on July 23, then took the lead against righthander Matt Bush, acquired via trade Monday, in the seventh.

To top it off, Pirates top prospect Oneil Cruz continued to crush the Brewers, sending the first pitch out of Brent Suter’s arm after relieving Bush with two outs in the seventh for a mammoth two-run homer to put Pittsburgh up, 7-4.

“I thought Matt Bush, it’s an electric arm. I think we all saw that,” Counsell said. “Things didn’t go his way tonight; he’s a good addition. Jake made some good pitches to Cruz and he chops one through the infield and they had some good at-bats against him after that. Just one of those games.”

Cruz has only been a big leaguer for just over a month but has already launched five homers, including the game-tying blast in a 5-3 Pirates win in the series opener, and has a 1.070 OPS against Milwaukee pitching. Against the rest of baseball, the 23-year-old has a .591 OPS and three homers.

“I mean, honestly he’s hit some good pitches out there,” Suter said. “He’s hitting pitches that weren’t even strikes out, so it’s not all necessarily meatballs or whatever. But mine today was a meatball.”

The Brewers, though, rallied in the eighth to tie the game after the first two hitters of the inning made outs. Victor Caratini and Tyrone Taylor singled, followed by a Christian Yelich walk to load the bases. Willy Adames made it 7-6 with a two-run single to left and Rowdy Tellez laced a hard-hit single to right to score Yelich and knot the score.

Lefthander Taylor Rogers, was sharp in a scoreless eighth in his Brewers debut after being acquired from San Diego as part of the return for Hader. He was joined by Lamet as what was thought to be a duo of arms as big-league bullpen help to offset losing Hader in the short term, but was instead the player designated for assignment when Milwaukee faced a roster crunch 48 hours after the trade.

It may simply be a coincidence, but uncharacteristic play from the Brewers since arriving in Pittsburgh has overlapped directly with the clubhouse having to work through the midseason trade of a player who not only was a four-time all-star closer but also a close friend to many within the room. Milwaukee. The Brewers will tell you that it hasn’t carried over to the field but regardless, it has all combined to make for a gut-wrenching couple of days.

“I mean, it hasn’t felt exactly normal yet, you know? But at the end of the day we’re professionals and we get paid to perform,” Williams said.

Williams told reporters on Tuesday there were “a lot of things that don’t really make sense” regarding trading Hader. Brandon Woodruff said he checked his phone after a round of golf and thought it was a joke at first. Following Wednesday’s loss, Suter shared a similar sentiment of surprise.

“We believe in this group,” Suter said. “I’ll say that we believe we can win the World Series with this group. It just wasn’t necessarily, the last couple days weren’t what people were thinking was happening, but it happened and we’re ready to roll with this group and ready to lock arms and do our best to win a ring together. But yeah, this is this is the group we have and we know that.

“We love everybody in this room and we’re ready to rock, but, yeah, I’d be lying if I said the last couple days weren’t a little surprising in some respects.”

The final innings of the game soured a positive addition the Brewers did receive just after the deadline, even if it came from within the organization already. Freddy Peralta made his first big-league start since May after suffering a right shoulder injury and lasted 3 2/3 innings, throwing 67 pitches and allowing two runs on four hits and two walks.

“I thought he was great. Really good,” Counsell said. “I thought the fastball was electric, for sure. You could tell he had guys cheating on the fastball. He threw some good curveballs to left-handed hitters, good changeups to left-handed hitters. The walks got him in trouble a little bit in the third, but overall we’re glad to get him out there and glad to get him started.”

Even between Peralta’s return and the offense staking the team out to a 4-0 lead thanks to a Kolten Wong RBI single in the first, a Adames two-run double in the second and a  Tellez run-scoring single one batter later, it wasn’t enough.

Afterward, the Brewers were quick to vocalize they were ready to turn the page to the next game, Thursday’s matinee series finale with the Pirates. With the way this week has gone so far, that is a wise call.

Subscribe to our Milwaukee Brewers newsletter for updates on the team.

Lions stock report after the 1st week of training camp