Chinese carmakers line up for 'phenomenal opportunity' in the UK

Where Are Stocks, Bonds and Crypto Headed Next? Five Investors Look Into Crystal Ball 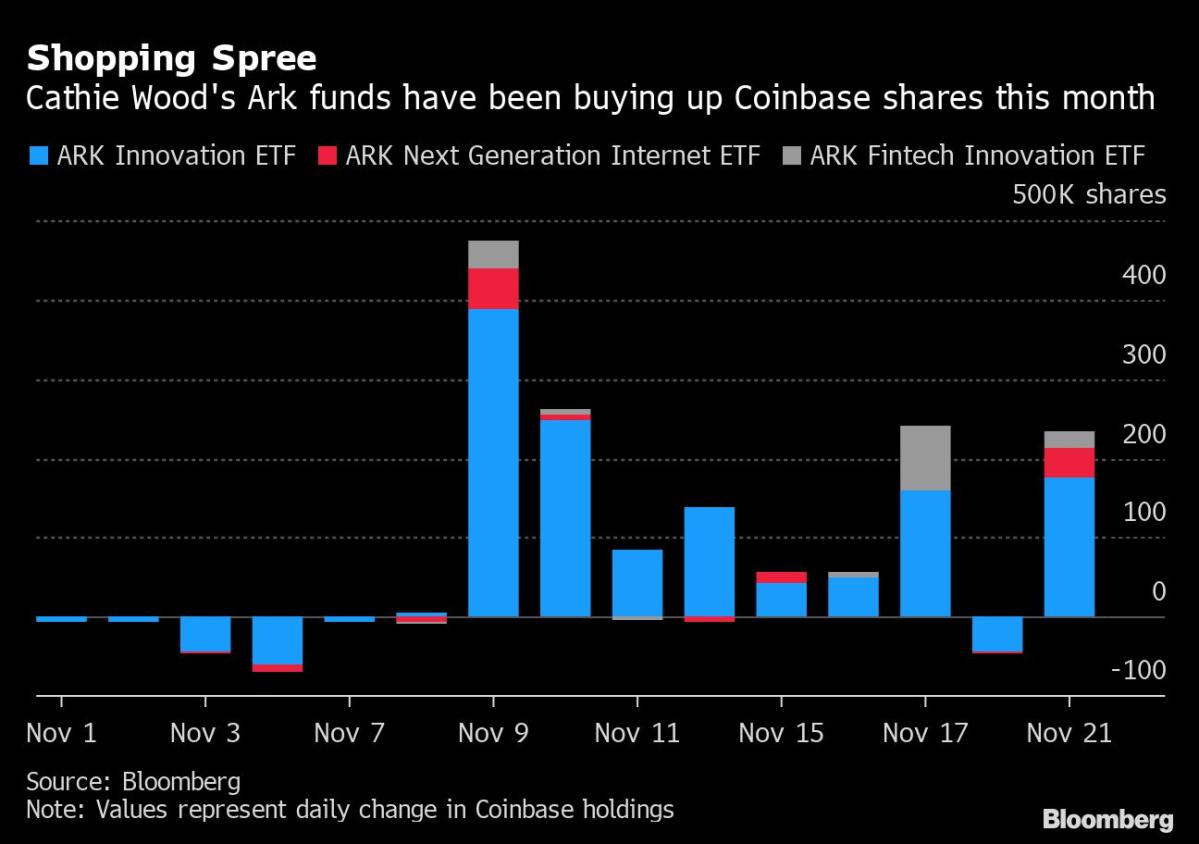 (Bloomberg) — Wall Street’s waning conviction in Coinbase Global Inc. has done little to deter Cathie Wood. Instead, she’s been scooping up shares of the struggling cryptocurrency exchange in the wake of the collapse of Sam Bankman-Fried’s FTX.

Wood’s Ark Investment Management funds have bought more than 1.3 million shares of Coinbase since the start of November, worth about $56 million based on Monday’s trading price, according to data compiled by Bloomberg. The shopping spree, which started just as FTX’s demise began, has boosted Ark’s total holdings by roughly 19% to about 8.4 million shares. That equates to around 4.7% of Coinbase’s total outstanding shares.

Coinbase initially rebounded in the days following Ark’s first purchase on Nov. 8, due in large part to softer-than-expected US inflation data which sent risk-assets surging globally. That rally, however, was short-lived for the crypto exchange, with its stock price falling for four consecutive days, including an 8.9% drop on Monday to close at a fresh record low.

The majority of Ark’s Coinbase holdings are from its flagship ARK Innovation ETF which has nearly 6 million shares for a weighting of about 3.6%, the fund’s 13th largest position. While the ARK Next Generation Internet ETF and ARK Fintech Innovation ETF each only hold just over 1 million shares, Coinbase’s weighting in the two funds is far higher at 5.4% and 6.3% respectively, according to data on Ark’s website.

Ark’s renewed interest in Coinbase stands in stark contrast to the sentiment emanating from Wall Street for the better part of the last six months. Analysts from firms including Bank of America and Daiwa Securities have downgraded the stock this month, leaving it with just 14 buy-equivalent analyst recommendations, its lowest number since August 2021.

Wood has also been adding to stakes in other crypto-related assets in recent weeks. Her ARK Next Generation Internet ETF purchased more than 315,000 shares of the Grayscale Bitcoin Trust last week as its discount relative to the value of its underlying cryptocurrency continues to widen. That buying was followed later in the week by a purchase of about 140,000 shares of crypto bank Silvergate Capital Corp.

The increased buying comes as cryptocurrecy-exposed stocks have plunged this year amid a deep selloff by tokens including Bitcoin and Ether. Coinbase and Silvergate Capital have both shed more than 80% of their value this year. Those losses are even deeper than those suffered by the world’s two largest cryptocurrenices — their prices have declined by more than 65% in 2022 with the plunge accelerating this month in the wake of the FTX collapse.

FTX Bankruptcy Filing: ‘No Amounts’ Will Be Paid to SBF or His Inner Circle

Why did Tyre Nichols get pulled over?

On Friday evening, Memphis officials released video footage of the violent arrest of Tyre Nichols, a 29-year-old Black man who...

Watch one of Yair Rodriguez's most brutal knocks out ahead of UFC 284.

Blustery showers and severe gales are expected in some parts of the UK today, as the Environment Agency puts in...

Of course, Ezekiel Elliott wants to return and is willing to take a pay cut. Should the Cowboys want him...

New Australian Open champion Aryna Sabalenka didn't get much sleep Saturday night after a rambunctious come-from-behind victory, but you wouldn't...

NFL betting: Bettor places $300K bet on Bengals to score at least 24 vs. the Chiefs

The Bengals scored at least 27 points in each of their three games against the Chiefs in 2022.

Elena Rybakina said she struggled with the "pressure" and aggression from Aryna Sabalenka in falling to defeat in the Australian...

Max Homa worked harder for Farmers win, and he was rewarded a million times more

Max Homa has perspective, yes, but after winning for the first time as a dad, Homa offered somme insight into...

The Bengals-Chiefs AFC championship game trash talk is getting embarrassing.

Championship Sunday is finally upon us! Which teams will be able to book that ticket to the Super Bowl? These...