Why are Alabama fans so happy that Bill O'Brien is leaving for Patriots?

Cowboys' Dak Prescott ripped apart by Stephen A. Smith for loss to 49ers 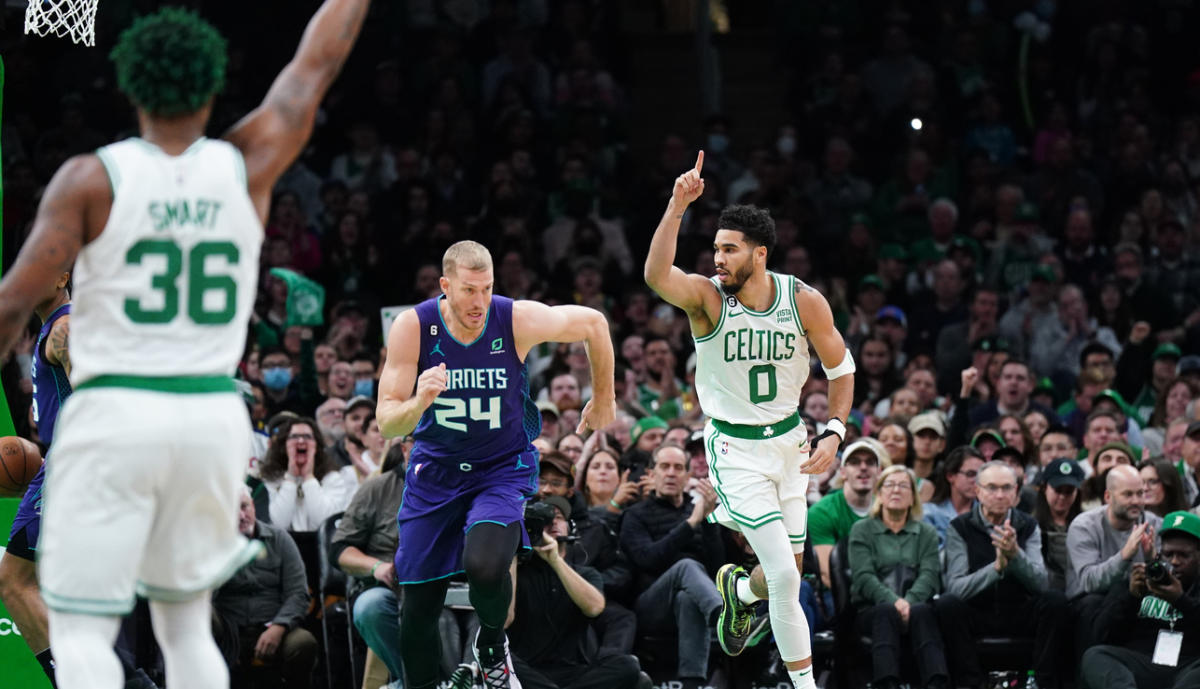 For the second consecutive night, the Boston Celtics offense proved capable of putting up historic numbers without one of their stars.

This time, Jayson Tatum was in and Jaylen Brown was out. Al Horford also was sidelined on the second night of a back-to-back. Despite their absences, the Celtics didn’t miss a beat.

Forsberg: How Smart and Jaylen went from headlocks to harmony

The C’s erupted for 78 first-half points (45 in first quarter) vs. the Charlotte Hornets. After dropping 113 points through the first three quarters in Sunday’s win, they entered the fourth quarter of Monday night’s game with 121. The final result: a 140-105 rout.

That’s four straight wins for the Celtics, who improve their record to a league-best 17-4. They will look to stay hot when they host the Miami Heat on Wednesday night.

Here are a few takeaways from Monday’s blowout victory.

Jayson Tatum picks up where he left off

The Jayson Tatum MVP campaign rolls on after his rest day on Sunday.

Tatum wasted no time showing his left ankle sprain is nothing to worry about. He sparked the Celtics’ offensive onslaught with 16 points in the first quarter.

The 24-year-old shot just 4-for-14 from 3-point range but still ended up with a game-high 35 points on 15-of-28 shooting from the floor. With the game already out of hand in the fourth quarter, Tatum got additional rest ahead of Wednesday’s game vs. Miami.

Monday marked Tatum’s third consecutive game with 30+ points. He has eight such performances in the month of November.

The Celtics’ guards were unstoppable in this one, and it all started with Marcus Smart.

Smart was the catalyst for the early scoring outburst as he accounted for 10 points and eight assists in the first quarter. According to Celtics.com’s Taylor Snow, Smart became the fifth player in NBA history to log at least 10 points, eight assists, and two steals in a single quarter.

The reigning Defensive Player of the Year ended up with 15 assists, a new career-high. He also was Boston’s second-leading scorer behind Tatum with 22 points on 8-of-11 shooting. He drilled six of his nine 3-point attempts.

Malcolm Brogdon had one of his best games so far as a Celtic. The prized offseason acquisition had 10 points in the first quarter and started the game 7-for-7 from the floor.

Brogdon finished with 21 points on 8-of-9 shooting to go with six assists and five rebounds. He joined Cleveland Cavaliers veteran Kevin Love as the only two bench players with a 20/5/5 on 70 percent shooting performance this season, per StatMuse.

And then there was Derrick White, who continues his strong offensive season with two quick 3s right out of the gate. He notched 15 points (5-8 FG)with six assists in 25 minutes.

Boston’s backcourt depth is something to behold. As a team, the Celtics dished 40 assists for their highest total since Dec. 2008. That’s now 13 straight games with 20+ assists.

Griffin made his third start of the season with the C’s and treated the TD Garden crowd to a vintage Blake Griffin moment.

The six-time All-Star hopped into a time machine and threw down a thunderous one-handed dunk during the second quarter.

The viral clip wasn’t Griffin’s only impactful moment of the night. He contributed nine points (4-5 FG) and four rebounds while being a +19 in 22 minutes.

If Griffin has more dunks like that one in the tank, that adds yet another reason why this C’s squad is appointment television.

A suspect has been arrested following an hourslong standoff at a Puyallup apartment complex on Tuesday. According to Pierce County...

A soldier walks past a line of M1 Abrams tanks at Ft. Carson in Colorado Springs, Colo., in 2016. (Christian...

It’s a hotly-anticipated psychological thriller, but for actor Jason Watkins it was a chance to give the most poignant and...

Survey shows lack of Holocaust awareness in the Netherlands