Hong Kong to ban CBD, label it a 'dangerous drug' 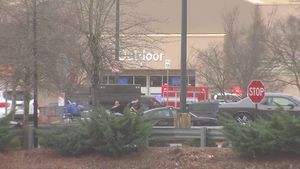 Police say one person was shot after a fight broke out outside a Cobb County Walmart Wednesday afternoon.

Cobb County police said they responded to reports of an active shooter at the store on Chastain Meadows Parkway just after noon.

Police evacuated the store and determined that there was not, in fact, an active shooter and that the shooting stemmed from a fight outside of the Walmart’s automotive center between two groups of people.

Shots were fired during the fight and one person was hit. Police said that one of the people involved in the shooting ran through the store, which is probably what made people think it was an active shooter situation.

Channel 2′s Michael Seiden was outside the store Wednesday afternoon, where he talked to witnesses who described the panic and chaos that broke out after the shots rang out.

“It was chaotic and you could tell people were panicked,” shopper Melody Hippos said.

Employees told Channel 2 Action News that some people ran out of the store and hid in the nearby woods. Other employees ran into nearby businesses.

Channel 2′s Tyisha Fernandes talked to Jesse Phillips, who works at the Dollar Tree in the same plaza as the Walmart. Williams said several employees came running into his story.

“You couldn’t even get in the parking lot, there were so many police cars and everything, SWAT and ambulances, fire department and stuff like that,” Phillips said

Conner Taylor who works at a nearby Sweet Hut said that he initially thought it was a shoplifting incident.

“Then eventually it got to the point where I saw officers going in with guns ready, and that’s when I knew something was really going on,” Connor said.

The Walmart will stay closed Wednesday night and officers plan to patrol the area.

Deputy Chief Ben Cohen said the two groups of people involved in the fight knew each other and that there is no danger to the public.

Several people have been detained for questioning, but no arrests have been made.