Pakistani listed by UN as terrorist denies links to al-Qaida

Zelenskyy said he's not sure Putin is still alive, as he seems absent from decision-making

Ukraine's Zelenskyy questions whether Putin is 'still alive', Moscow assures he is 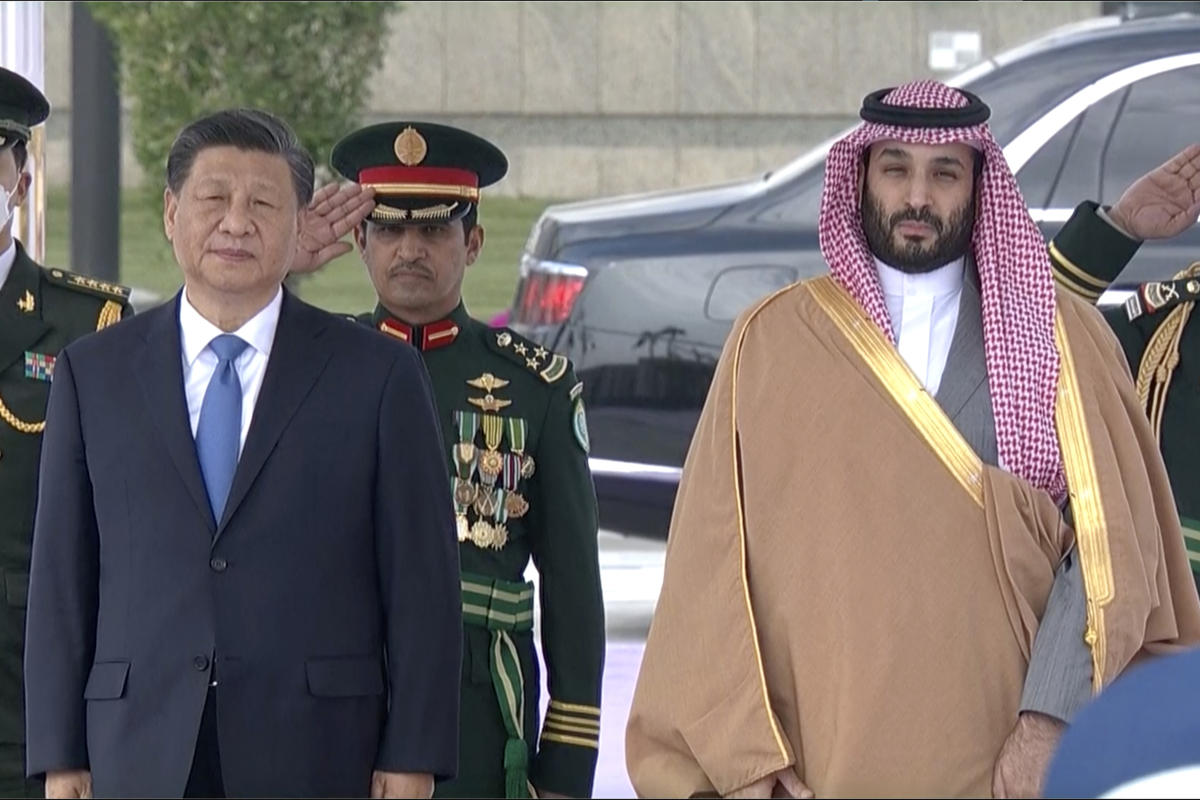 DUBAI, United Arab Emirates (AP) — Chinese leader Xi Jinping met on Thursday with Saudi Arabia’s king and the crown prince while on a visit to the kingdom, solidifying ties with a region crucial to his country’s energy supplies as sanctions intensify on Russia over its war on Ukraine.

Xi arrived at Al Yamama Palace in Riyadh and was greeted by Crown Prince Mohammed bin Salman, the king’s assertive son who stands ready to rule the oil-rich kingdom in the decades to come. Xi shook hands with the prince as an honor guard on horseback carried Saudi and Chinese flags.

It wasn’t immediately clear what the two focused on in their discussions, though Xi in a newspaper column published by Al Riyadh newspaper said “exchanges between China and Arab states date back more than 2,000 years.” The column also quoted a saying by Islam’s Prophet Muhammad: “Seek knowledge even if you have to go as far as China.”

He also noted that the Gulf Cooperation Council countries, which include Bahrain, Kuwait, Oman, Qatar, Saudi Arabia and the United Arab Emirates, serve as “an energy tank for world economy.” China, the world’s largest crude oil importer, relies heavily on Saudi oil, paying tens of billions of dollars annually to the kingdom.

Gulf Arab states are trying to recalibrate their foreign policy as the United States turns its attention elsewhere in the world.

Russia’s war on Ukraine — and the West’s hardening stance on Moscow — has also left the Arab countries wanting to cement ties with China. For Prince Mohammed, hosting Xi boosts his own international profile after being linked to the killing of Washington Post columnist Jamal Khashoggi.

Beyond China’s oil purchases, its construction expertise could be tapped as well for Prince Mohammed’s planned $500 billion futuristic city of Neom on the Red Sea. Chinese construction firms have worked elsewhere in Arab countries in the Persian Gulf, particularly in Dubai in the UAE.

Saudi Arabia, home to the holiest sites in Islam, also has provided political cover to China over its harsh policies toward Uyghurs and other Muslim minorities. More than a million have been sent to detention centers, forced to denounce Islam and swear fealty to Xi and the party.

The trip to Saudi Arabia marks a further move by Xi to restore his global profile after spending most of the pandemic inside China. The visit is his third overseas trip since early 2020. It also comes as Xi, who was granted a third five-year term as leader in October, has faced street protests over his zero-COVID-19 policies that represent the most-significant challenge to his rule.

During the visit, Xi is expect to attend the inaugural China-Arab States Summit and a meeting of the GCC.

A passerby found a woman’s body inside a blanket along the shoulder of a highway the same day she was...

Defendant: God issued threat to Kansas lawmaker through me

TOPEKA, Kan. (AP) — A man told jurors Thursday that a death threat he made against U.S. Rep. Jake LaTurner...

A ‘Black Thursday’ of demonstrations and strikes against pension reform descended into violence in France today. The worst trouble was...