Could Jimmy Garoppolo end up with the Rams? 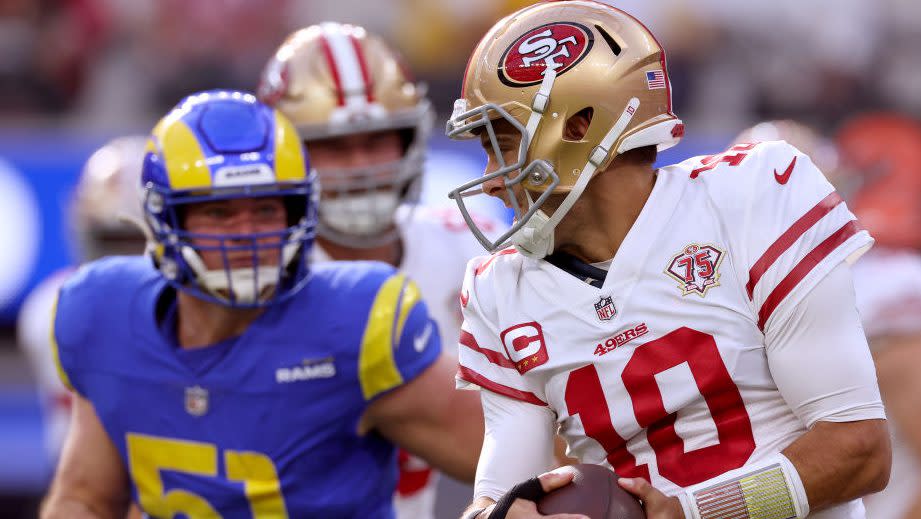 As the 49ers and quarterback Jimmy Garoppolo continue to wait for a starting quarterback to suffer a season ending injury, a team in the same division has an injury that could limit if not prematurely end his season.

And so the question that has emerged in recent days. Could Garoppolo end up with the Rams?

The question has become more relevant as more information has emerged regarding starting quarterback Matthew Stafford‘s elbow. Reportedly a case of “bad tendinitis,” it’s a baseball issue — and the Rams seem to be flummoxed by the situation.

It would be awkward, to say the least, for the 49ers to trade him to the Rams. The more likely scenario would entail the 49ers releasing Garoppolo before Week One, making him a free agent who could sign with any team. Then, the Rams could try to woo him as the insurance policy for Stafford.

Would they do it? The alternative is John Wolford, so why wouldn’t they?

It’s obvious that the 49ers will indeed cut Garoppolo before Week One, since if they don’t his $24.2 million base salary becomes fully guaranteed. The 49ers would prefer to be able to trade him, and Garoppolo would prefer to land with a team that desperately needs a quarterback. That way, he’d be a lot more likely to get something closer to what he’s due to earn this year.

But if there’s no opening for a trade, the Rams could be a fit. The Seahawks could be, too. It would be strange, to say the least, if a pair of division rivals end up in a tug of war for Garoppolo.

Could Jimmy Garoppolo end up with the Rams? originally appeared on Pro Football Talk