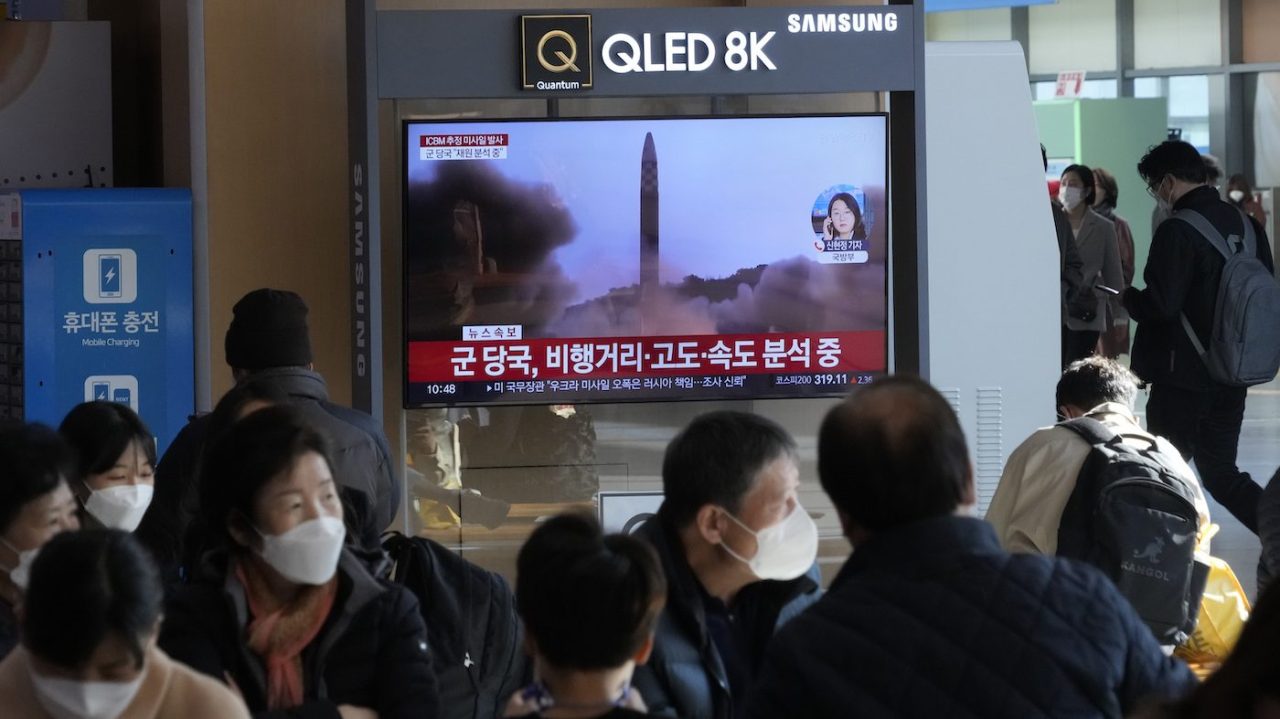 North Korea’s latest missile launch of an intercontinental ballistic missile (ICBM) drew fresh concerns Friday after U.S. ally Japan said it had the potential range to reach the U.S. mainland from Asia if launched with that intent.

We’ll share the details of the launch and why the timing matters, plus mass blackouts in Ukraine amid Russia’s ongoing missile barrage and evidence of explosives found in the Nord Stream pipelines.

This is Defense & National Security, your nightly guide to the latest developments at the Pentagon, on Capitol Hill and beyond. For The Hill, I’m Ellen Mitchell. A friend forward this newsletter to you?

Timing: The launch of the ICBM, the second from the isolated country in two days, occurred during the Asia-Pacific Economic Cooperation summit in Thailand where Vice President Harris was attending with other international leaders.

Harris was joined by representatives from Canada, Japan, South Korea, New Zealand and Australia, all of whom condemned the missile launch.

The details: The ICBM, which has the power and longevity to reach North America — was launched around 10:15 a.m. local time from Pyongyang, flying about 621 miles east, according to South Korea’s Joint Chiefs of Staff (JCS).

The JCS also said the missile reached an altitude of about 3,790 miles, with Japanese Defense Minister Yasukazu Hamada noting it had the potential to reach the U.S. mainland.

Vice President Harris on Friday lashed out at North Korea after its most recent missile launch during an appearance at the Asia-Pacific Economic Cooperation (APEC) summit, calling the move a “brazen violation” of United Nations security resolutions.

Harris claimed at the summit that the country’s conduct “destabilizes security in the region and unnecessarily raises tensions,” according to CNBC.

“We strongly condemn these actions and we again call for North Korea to stop further unlawful, destabilizing acts,” she said.

The vice president also addressed economic partnerships between the U.S. and the Asia-Pacific region in her remarks at the meeting, emphasizing the importance of collaboration among private businesses stationed in various countries.

Millions without power in Ukraine amid attacks

“There are emergency shutdowns in addition to planned, stabilization ones,” Zelensky said in the announcement, referring to electricity shutdowns.

Where it’s the worst: The president added that electricity is in particularly short supply in the Vinnytsia, Odessa, Sumy and Kyiv regions of Ukraine.

“The elimination of the consequences of another missile attack against Ukraine continues all day,” Zelensky said.

Russian shelling on Thursday resulted in casualties in the eastern cities of Dnipro and Zaporizhzhia, according to the president.

Zelensky’s plea: “We repeat to our partners again and again that only full protection of the Ukrainian sky will protect both Ukraine and Europe from many possible escalations of Russian aggression and will definitely encourage Russia to truly end the war,” Zelensky said, thanking Finland and Sweden for their material support of Ukraine.

Sweden: Evidence of explosives in pipelines

Swedish officials say they have found evidence of explosives in the Nord Stream pipelines that carry natural gas from Russia to much of Europe after leaks cut off the supply earlier this year.

‘Gross sabotage’: The Swedish Security Service said in a statement on Friday that their investigation shows the Nord Stream 1 and 2 pipelines have been subject to “gross sabotage” and explosive residue was found on multiple items that were analyzed.

“In the crime scene investigations carried out onsite in the Baltic Sea, the extensive damage to the gas pipelines resulting from detonations has been thoroughly documented,” the statement reads.

Earlier: The service previously said last month that its preliminary investigation raised their suspicions that sabotage was a possible cause of the leaks.

Seismologists detected major explosions near the pipelines before the leaks were discovered, and Denmark concluded that “deliberate actions” caused the ruptures.

Pressure: Russia began reducing the amount of natural gas it supplied to Europe months ago as its war against Ukraine continued. Experts and Western leaders have said that the Kremlin is trying to put economic pressure on Ukraine’s Western allies to end their support for Ukraine, but it is unlikely to cause their aid to end.

That’s it for today! Check out The Hill’s Defense and National Security pages for the latest coverage. See you next week!

California governor set to release $1B for homelessness

Education Issues Vault to Top of the GOP’s Presidential Race