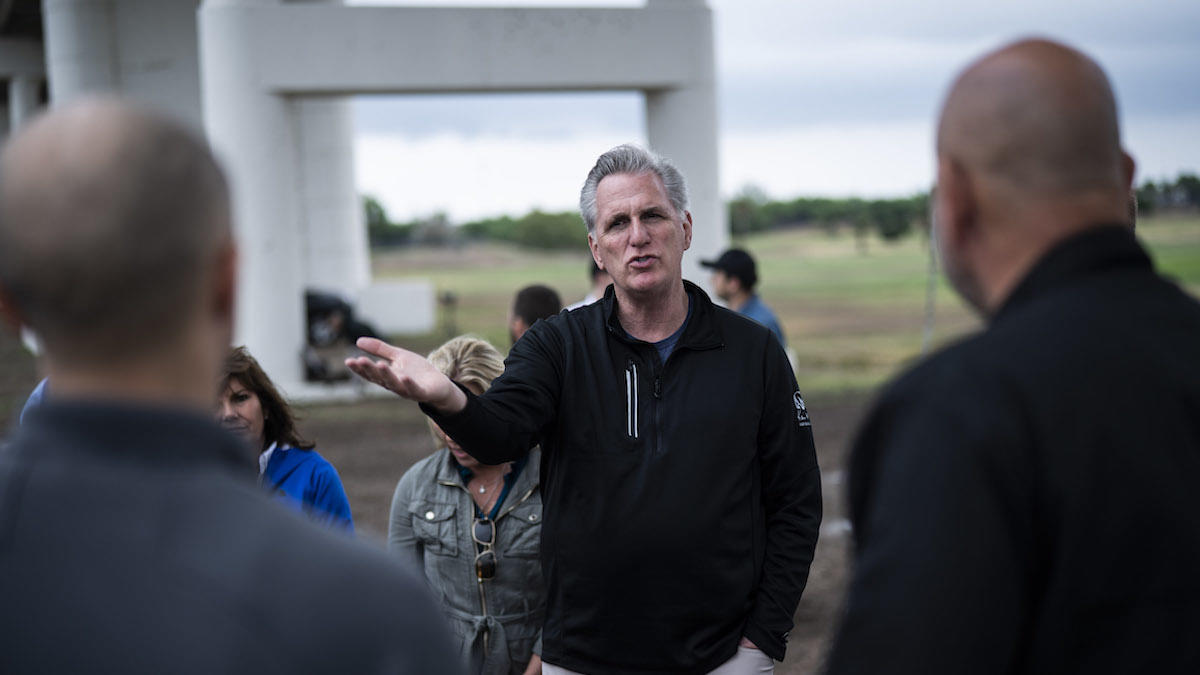 Presumptive future House Speaker Kevin McCarthy warned on Tuesday that Homeland Security Secretary Alejandro Mayorkas could face impeachment proceedings in a Republican-led House if he does not resign over the Biden administration’s handling of an unprecedented migration wave along the U.S.-Mexico border.

McCarthy, who is expected to lead a slim Republican majority in the House starting in January, threatened the impeachment inquiry into Mayorkas during a press conference in El Paso, which, like most parts of the U.S. southern border, has seen a marked increase in illegal border crossings over the past year.

“Our country may never recover from Secretary Mayorkas’ dereliction of duty,” McCarthy said during a joint press conference with GOP lawmakers. “This is why today I am calling on the secretary to resign. He cannot and must not remain in that position. If Secretary Mayorkas does not resign, House Republicans will investigate. Every order, every action and every failure will determine whether we can begin impeachment inquiry.”

McCarthy also threatened to use “the power of the purse and the power of subpoena” to investigate and derail the Biden administration’s immigration and border policies, saying Republican-led committees would hold oversight hearings near the U.S.-Mexico border.

In response to McCarthy’s remarks, Department of Homeland Security spokesperson Marsha Espinosa said Mayorkas has “no plans to resign.”

“Secretary Mayorkas is proud to advance the noble mission of this Department, support its extraordinary workforce, and serve the American people,” Espinosa added in a statement to CBS News. “The Department will continue our work to enforce our laws and secure our border, while building a safe, orderly, and humane immigration system. Members of Congress can do better than point the finger at someone else; they should come to the table and work on solutions for our broken system and outdated laws, which have not been overhauled in over 40 years.”

Congress has not passed a bipartisan, comprehensive immigration reform bill since a Democrat-held Congress passed the Immigration Reform and Control Act of 1986 under then-President Ronald Reagan. Pushes to overhaul the nation’s immigration system under Presidents George W. Bush in 2007 and Barack Obama in 2013 ultimately died on Capitol Hill.

A Cuban refugee who escaped the communist-ruled island with his family as a child, Mayorkas was confirmed by the Senate to lead the DHS in February 2021 on a largely party-line vote. His confirmation was supported by immigrant rights advocates and some law enforcement officials, who highlighted his refugee background, as well as his experience as a federal prosecutor and a top immigration official at the DHS during the Obama administration.

But Mayorkas also quickly became the target of intense Republican criticism over the Biden administration’s handling of the record migrant apprehensions reported by U.S. border officials in fiscal years 2021 and 2022.

In fiscal year 2022, a 12-month span that ended on Sept. 30, the U.S. intercepted migrants nearly 2.4 million times, a record high, government statistics show. The tally, however, included over 1 million expulsions of migrants processed under a public health restriction known as Title 42 and a significant number of repeat border crossings by the same individuals.

The migration wave has been partially driven by pandemic-era woes in Latin America, labor demands in America, uneven U.S. enforcement policies and a mass exodus from Cuba, Nicaragua and Venezuela, where the U.S. cannot currently conduct large-scale deportations due to strained diplomatic relations with the authoritarian governments there.

But Republican lawmakers have accused Mayorkas and other Biden administration officials of fueling the sharp increase in illegal border crossings by reversing some Trump-era restrictions, including a policy that required migrants to wait in Mexico for their U.S. asylum hearings.

During multiple hearings before Congress over the past two years, Mayorkas has faced tough, and often personal, criticism from Republican lawmakers, who have ridiculed his assertion that the southern border is secure. In one hearing, a Republican congressman compared Mayorkas to Benedict Arnold, the infamous American military officer who defected to the British side during the Revolutionary War.

If Mayorkas faces an inquiry in the House, his impeachment is not a certainty, given the expected slim Republican majority in the chamber next year. But even if he is impeached, Mayorkas would likely not be removed from office, since conviction requires a two-thirds majority in the Democratic-led Senate.

Only one cabinet member has ever been impeached — Secretary of War William Belknap. In 1876, the member of President Ulysses S. Grant’s administration was accused of accepting bribes, but was ultimately acquitted by the Senate.