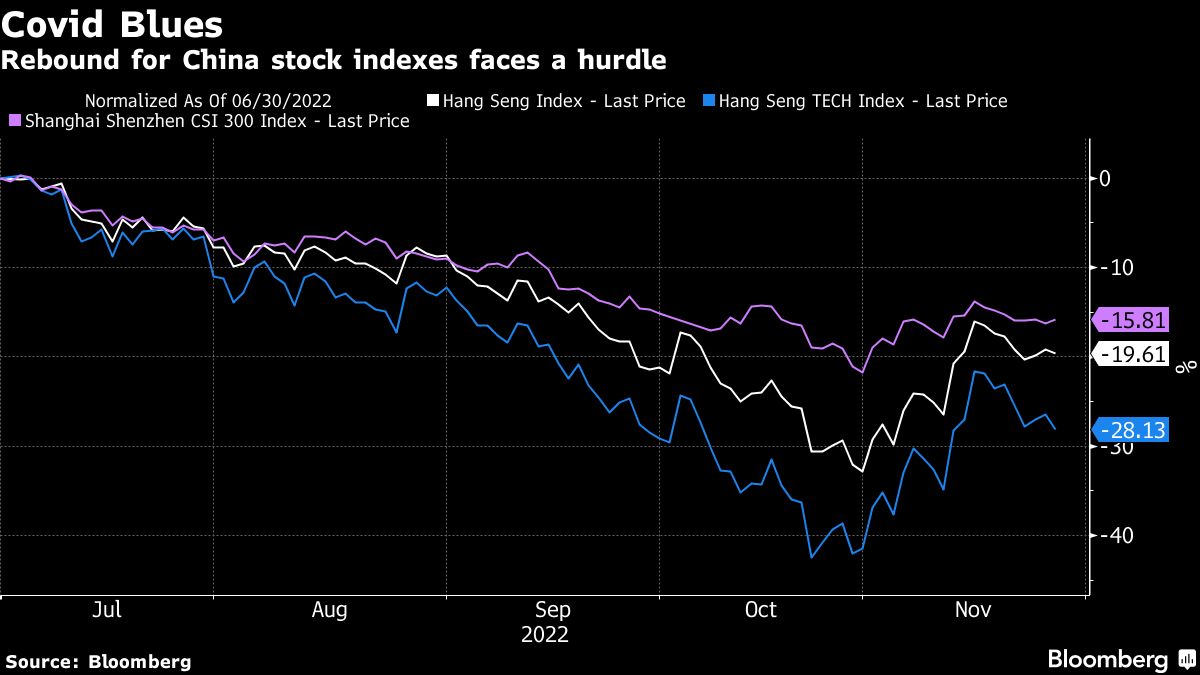 (Bloomberg) — The dollar rose and stocks were likely to face downward pressure as markets open in Asia on Monday to news of growing unrest in China over Covid restrictions.

The greenback made some of its biggest early gains against the currencies of Australia and South Africa, both of which are exposed to trade with China. The offshore yuan fell about 0.5%.

Equity futures for Hong Kong and Australia had already pointed toward declines even before protests worsened over the weekend. Contracts for Japanese shares rose earlier.

Treasuries may find support on bids for safe assets, though moves could be complicated by Thursday’s holiday in the US, followed by shortened trading on Friday. Yields on the benchmark 10-year maturity edged down to 3.68% Friday.

Oil, which suffered a third weekly loss, may also face headwinds as the demand picture from China deteriorates.

The downbeat mood emanating from China contrasts with the boost to sentiment in global markets last week after the Federal Reserve’s Nov. 1-2 meeting minutes showed most officials backing slowing the pace of interest-rate hikes. Since the Fed’s latest meeting, investors have parsed a bevy of economic data that somewhat eased inflation concerns, further strengthening the case for smaller rate hikes.

The S&P 500 notched a weekly gain of 1.5% that took the index to the highest level since early September. The Nasdaq 100 also eked out a gain for the week.

All eyes will be on the US jobs report this week and on Fed Chair Jerome Powell and New York Fed President John Williams, who are among central bank officials scheduled to speak.

Amid the challenges in China, the nation’s central bank on Friday cut the amount of cash lenders must hold in reserve for the second time this year, an escalation of support for an economy that’s being weighed down by Covid curbs.

Elon Musk Email Was Old News. He Still Likes His Advice For Managers.