Purdy has 49ers between Brock and a hard place

Looking Back: 3 Takeaways from Purdue's Win at the Barn

Medvedev knocked out of Australian Open by 'thrilled' Korda 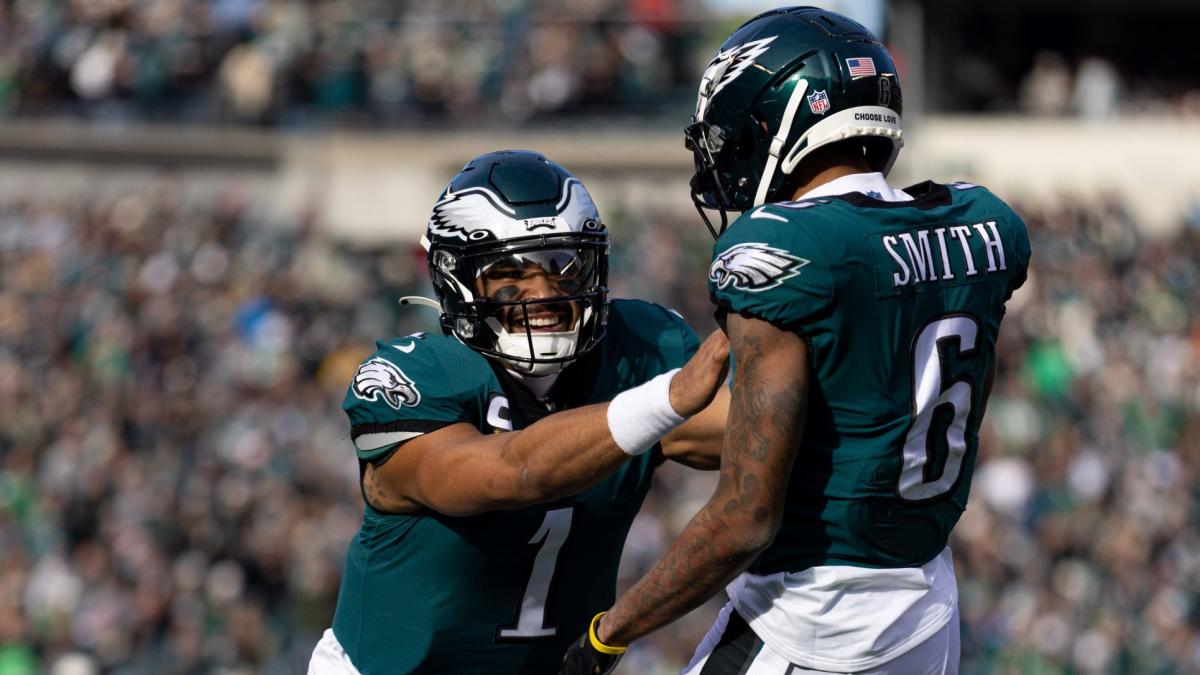 The Eagles flexed their muscles at home on Sunday on both sides of the ball, dropping bombs from the sky and smothering the Titans’ offense in one of their most impressive wins of the season.

A slow, penalty-bogged first half finally gave way to some enjoyable football from Jalen Hurts, who was once again brilliant and now has 29 total touchdowns in 12 games. The defense came prepared for Derrick Henry and shut him down from the jump.

It was a total bludgeoning, so let’s overreact as the Eagles reach 11-1 for the fourth time in franchise history:

1. Howie Roseman should win Executive of the Year

Howie Roseman once had an up-and-down relationship with Eagles fans. Right now it’s nothing but up.

Roseman evaluated his roster after the loss to the Bucs last postseason, decided Jalen Hurts was good enough to go for it right now, and went to work putting numbers on the board.

He signed Haason Reddick, who has been fantastic. He added James Bradberry late in the summer, and Bradberry has rewarded him by playing at a CB1 level all year. And he executed two tremendous trades, turning a first-round pick, a third-round pick, and a few late-round picks into C.J. Gardner-Johnson and A.J. Brown.

Brown has been one of the best receivers in football all season, and his revenge game against his former team was the latest and most emphatic reminder of how brilliant that trade was.

Brown cooked the Titans all afternoon in South Philly, making ludicrous catches like this one, his second touchdown of the day:

Brown finished Sunday’s game with eight catches for 119 yards and two touchdowns. He now has 61 catches for 950 yards and nine touchdowns on the season. He’s one of the best wideouts in the world.

Adding Brown to the team was such a dramatic and immediate upgrade that he basically unlocked the entire team. It was a gutsy move from Roseman, and he absolutely nailed it.

If the Eagles had drafted a wide receiver we likely would’ve seen a bit of a leap from Hurts, because he clearly put the work in this offseason. But adding a player like Brown was the perfect way to find out exactly what you had at quarterback and expedite the franchise’s next few years. Roseman couldn’t have made a better decision: invest in talent around Hurts, figure out if you have a QB, and if it *really* works you suddenly have a young QB on a cheap deal while you make a Super Bowl run with talent all around him.

The Eagles will extend Hurts this offseason with a big-money deal, and then Roseman will have to keep earning his keep with moves on the margins. It’s a different game.

But his current hot streak should have Eagles fans feeling confident that he’ll be able to sustain this success.

2. The Eagles are their own biggest threat

The Eagles committed 12 penalties on Sunday, squeezing in some truly ugly football around another high-scoring win.

But a larger message needs to come out of the shabby football the Eagles played in South Philly: this is the kind of stuff that will lose you a winnable game in the playoffs, and they need to tighten it up before it’s win-or-go-home time.

The Eagles have proven week in and week out that they’re one of the most talented teams in the NFL, top to bottom. They should be able to win any game. But losing your focus and committing penalties is a great way to let a team hang around longer than they should, like the Titans did Sunday. Derrick Henry couldn’t find a free yard, Jalen Hurts was slinging it, and the pass rush was getting home… yet the Eagles weren’t pulling away because they kept stepping on their own feet.

I don’t really buy into football fans who think the Eagles are overrated because of their schedule, but I do think the Eagles need to remember that better teams will capitalize on these mistakes. If you’re playing the 49ers they will feast on a sloppy football team. The Cowboys likely will, too.

Getting bounced in the postseason because you keep making dumb mistakes would really sting when you know how good this Eagles team is and how far it can go. So clean it up now, before it’s too late.

3. The past two weeks should terrify the NFL

Last week the Eagles ran for 363 yards en route to 40 points. Jalen Hurts had 17 carries and 157 yards on the ground. It was a tour de force in the run game, spearheaded by the way their dynamic dual-threat QB terrifies opposing defenses.

This week the Eagles ran for just 41 yards in the first three quarters while Hurts threw for 380 yards, completely dicing up the Titans’ secondary and dropping dimes to elite wide receivers and backup tight ends alike.

There’s nothing scarier than Patrick Mahomes, who seems unstoppable and who can score in a million ways we haven’t even thought of yet.

But the Eagles have to be approaching Mahomes-level of terror for defensive coordinators, because there simply doesn’t seem to be a way to stop their offense. They really can do it all.

They did something Sunday that hasn’t happened since 1987:

Some talking heads have repeatedly said they still have questions about the Eagles, probably because they haven’t actually watched the games. Hurts wasn’t a great passer last year, and the image of his iffy showing against the Bucs in the postseason is likely seared in their minds.

Hurts is currently an elite passer. He had just a couple bad throws on Sunday. Everything else was absolutely on the money. Even some of his attempts that were marked as incompletions were great throws, like an incredible ball to DeVonta Smith in the third quarter that would’ve been an admittedly tough catch but was absolutely perfectly-placed.

He’s on another level right now. I think he’s the MVP. And he’s only 24 years old.

Man charged in death of Oklahoma girl, 4, returned to state

ANADARKO, Okla. (AP) — A man charged in the Christmas Day beating death of a 4-year-old Oklahoma girl has been...

Purdy has 49ers between Brock and a hard place

Charles McDonald examines one of the most unique quarterback battles in recent memory and asks if the Giants have a...

An innovative project seeking to develop climate resilience, self-sufficiency and the empowerment of vulnerable rural communities in southern Madagascar, could...

Fancy a kick about, Your Majesty? Cheerful Charles gets a toe to the ball during latest engagement

The King and the Queen Consort watched children play football during a visit to the Norbrook Community Centre in Wythenshawe. Charles...

Jen Shah’s scam victims speak out: ‘You get to the point where there’s no way out’

Victims of Jen Shah’s telemarketing scam are speaking out publicly for the first time after the “Real Housewives of Salt...

The family of Naomi Judd — Larry Strickland, Ashley Judd and Wynonna Judd — at the Naomi Judd: A River...

Brittany Snow has officially filed for divorce from Tyler Stanaland. In court documents filed in the Superior Court of California...

The National Press Club has called on The CW‘s new owner, Nexstar, to “explain why they have partnered with the...

Looking Back: 3 Takeaways from Purdue’s Win at the Barn

Purdue went to the Barn on Thursday Night and played its most complete defensive game of the season. The swarming...

There was plenty of bad blood between the Canadiens and Panthers on Thursday.