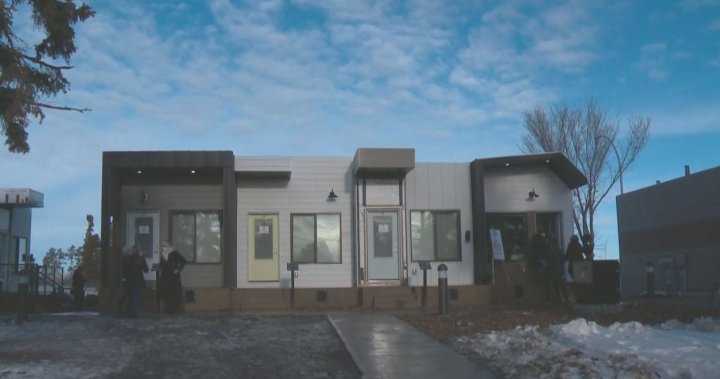 More than a dozen vulnerable veterans in Edmonton will soon have a new place to call home.

After more than two years of planning and construction, Edmonton’s Homes for Heroes tiny home village is now complete.

“This is a day full of hope, relief and excitement,” Premier Jason Kenney said.

“Here they’ll find comfortable homes with all the features of larger houses along the peace and stability they need for a fresh start,” Kenney said.

In addition to housing, veterans will also receive an array of social supports.

1:58
Wetaskiwin encampment to get temporary warming shelters amid demands for permanent housing

Wetaskiwin encampment to get temporary warming shelters amid demands for permanent housing – Nov 13, 2021

“These homes for heroes are directly supporting veterans with their transition to civilian life and providing an affordable home with important wrap-around programs,” Homes for Heroes president Dave Howard said.

He said there are currently more than 200 veterans experiencing homelessness in Edmonton.

The existing village in Calgary which opened in 2019 has already helped transition several veterans, a success Howard hopes to replicate here in Edmonton.

“This is a give-back, this is a return for them to focus on rebuilding their lives and transitioning. A change out of the military is a big thing and this is a great step for that,” Sgt. Paul Kruhlak of the Canadian Armed Forces Lord Strathcona’s horse regiment said.

Each roughly 300-square-foot home is named after a Canadian soldier who died in the service. A memorial plaque stands outside each tiny home, an opportunity to honour the fallen while educate others.

“Once our tenants are settled in their new homes, our on-site councillor will be inviting schools to the village to tour the homes, the resource center and more importantly the honour plaques,” Howard said.

The project did face delays but with more than $1 million from the province, $1 million from feds, donated land by the City of Edmonton and funding from other corporations and private investors, it is now operational with the first group of veterans ready to move in.

“Suffering During Partition Should Not Be Forgotten”: RSS Chief Mohan Bhagwat