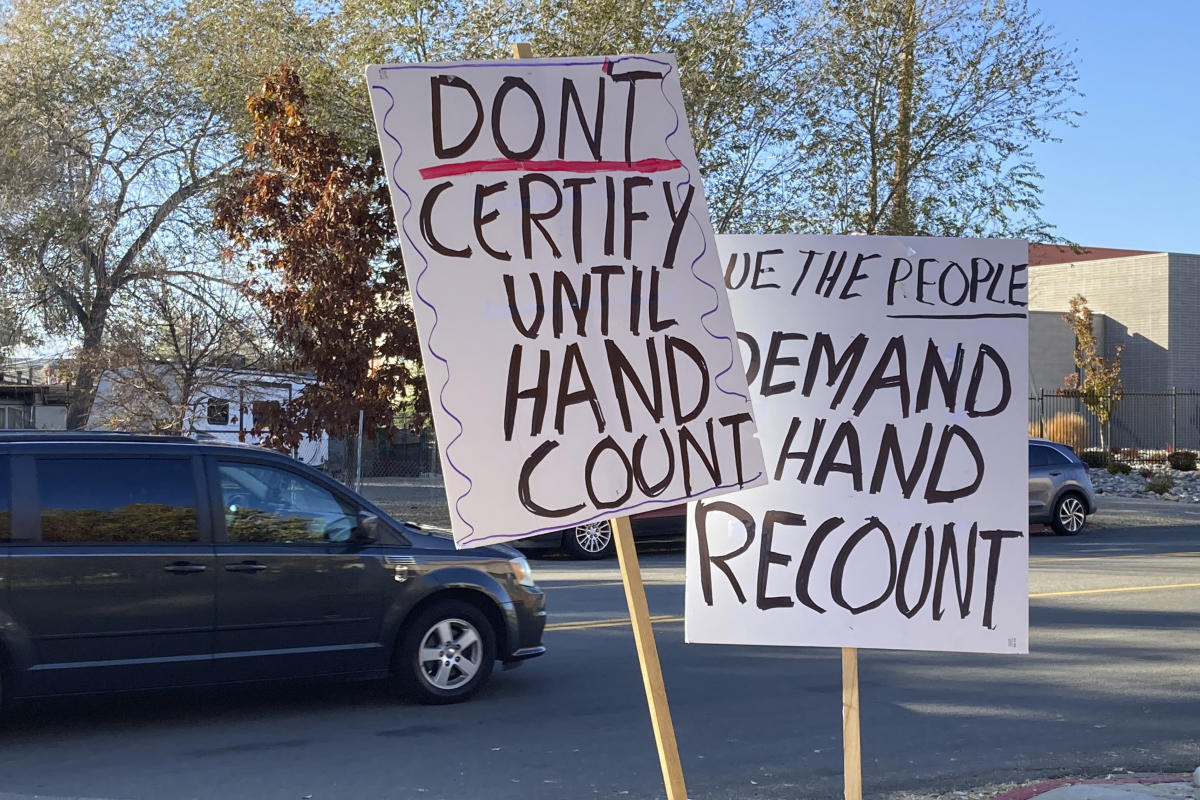 SANTA FE, N.M. (AP) — Certification of this year’s midterm election results appears to be proceeding smoothly with little controversy across the country, calming fears that local commissions consumed by talk of election conspiracies would create chaos by refusing to validate the will of the voters.

Action has been orderly even in places where suspicions about election fairness ran deep and led to bitter clashes at local public meetings.

Friday was the last day to certify for counties in Nevada, a state that has been a hotbed of election conspiracy accusations and movements to ditch voting machines in favor of hand-counting all ballots. Still, all 17 counties were on pace to certify their results by the end of the day.

In rural Elko County, the county commission unanimously certified the results just weeks after questioning the reliability of voting machines and expressing support for hand-counting all ballots.

Commissioners praised county Clerk Kris Jakeman for a post-election audit that included random hand-counts backing up the results from machine tabulators. Some commissioners had watched the audit and said it helped relieve some of their skepticism.

“I’ve learned a lot this year,” said Commissioner Delmo Andreozzi. “And I appreciate everybody’s willingness to help educate me and help me become more aware about the whole process.”

It was much the same story in New Mexico, where several rural county commissions have been under intense pressure by some residents to reject certification since the state’s primary election in June.

In Otero County, where a crisis occurred this summer when commissioners initially denied certification after the primary, the general election results were certified this week with a drama-free unanimous vote.

“In my heart of hearts, I think Otero County does a good job,” Commission Chairwoman Vickie Marquardt said. “I have no reason not to certify this election.”

In another rural New Mexico county, where a livid crowd in June berated county commissioners as “cowards” and “traitors” as they certified the primary results, the room fell silent this week as the all-Republican board pored over vote tallies and signatures from poll judges. Commissioners peppered Torrance County election officials with questions before voting 3-0 to certify.

The commission had spent months responding to doubts about voting systems with a hand recount of the primary ballots and invitations to attend security testing of ballot-counting machines.

“I’m not seeing any discrepancies, commissioners. Are you?” Republican commission Chairman Ryan Schwebach told colleagues. He won reelection to the local post with roughly two-thirds of the vote, defeating a challenger who said vote-counting machines can’t be trusted.

Conspiracy-focused protesters rallied Friday outside an election board meeting in Reno, Nevada, with signs reading “Don’t certify before hand count” and “We the people demand hand count.” Despite the protests, the Washoe County commission voted 4-1 to certify the results.

County Commissioner Jeanne Herman, who represents the most rural part of the county, which stretches north to the border with Oregon, cast the lone dissenting vote. She made a failed attempt earlier this year to push an election reform package that, among other things, would have posted National Guard troops at polling places and relied almost exclusively on paper ballots.

Christiane Brown, a Reno gun control activist, told the commission that the system worked this year, and even most candidates who had embraced the 2020 election falsehoods conceded defeat.

“Denying results does not change them,” she said. “The people rejected lies, disinformation, intimidation and ignorance, as well as hatred. The voters spoke, the system worked, and the rule of law held.”

In Arizona, the state’s 15 counties are just beginning to certify their election results and have until Nov. 28 to do their canvass and send final vote tallies to the secretary of state. Kari Lake, the Republican who lost the race for governor, has refused to concede and in a Thursday video said she has a team of lawyers reviewing whether Election Day issues at the polls disenfranchised some voters.

Despite the potential for legal action, there was no indication that any county might vote against the certification that will be needed before a recount can proceed in the race for state attorney general, which is too close to call.

Under Arizona law, the only role of the elected county boards is to accept the numbers as they are tallied by their elections departments. If they refuse to do so, either the secretary of state or a candidate would sue.

Election certification emerged as an issue after the 2020 presidential election in Michigan, where Trump and his allies pressured Republicans on both the state certification board and the one for Wayne County, which includes Detroit. The results, showing Democrat Joe Biden winning the state by 154,000 votes, were eventually certified.

Detroit City Clerk Janice Winfrey said her office anticipates having no problems with certification of the Nov. 8 general election. By midday Friday, 65 of the state’s 83 counties had certified results.

“More Michigan citizens cast ballots than ever before in a midterm election, and now bipartisan canvassing boards across the state are certifying the results in accordance with state law,” said Michigan Secretary of State Jocelyn Benson. “We are optimistic that all canvassers will continue to demonstrate this level of professionalism and commitment to upholding the will of the voters.”

WHO: The cumulative number of confirmed cases of new crown in the world has reached 633601048