Europe Reasserts Middle Path on China, Pushing Back on Biden

In earthquake rescues, noisy gear and digging, then silence

Investigators: There is evidence that Putin supplied missile that downed MH17. 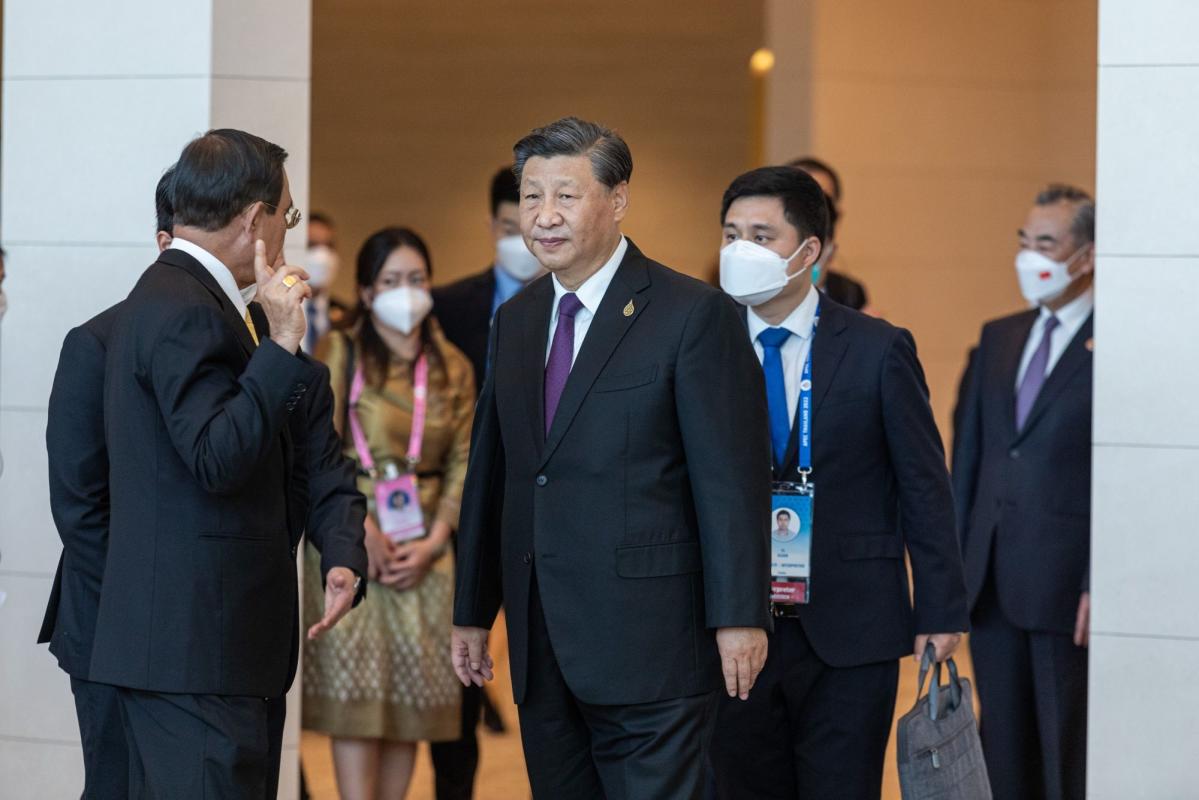 (Bloomberg) — President Xi Jinping started his week overseas mending ties with the US, and ended it with European leaders making the case for resisting the Biden administration’s sweeping chip curbs on China.

The shift in sentiment amounts to a victory for Xi on just his second foray outside of China since the pandemic began — a span that had seen Beijing’s relations with the US and its allies go from bad to worse. In October, President Joe Biden restricted the sale of semiconductors and chipmaking equipment to China in a bid to stem its economic development, and asked key allies to comply — raising fears of a split in the global economy.

On Friday, French President Emmanuel Macron called for engagement with Beijing and resisting efforts to divide the world into competing blocs. That followed similar appeals from German Chancellor Olaf Scholz, who visited China earlier this month, and efforts by Dutch Prime Minister Mark Rutte to coordinate with other key chipmaking nations in resisting US pressure.

“Now, progressively, a lot of people would like to see that there are two orders in this world,” Macron said in a speech to business executives at the Asia-Pacific Economic Cooperation CEO summit in Bangkok. “This is a huge mistake, even for both the US and China.”

“We need a single global order,” he added, a line that drew extended applause.

The French leader’s comments in particular show Europe is finding its footing in carving out a middle ground when it comes to China. While calls have grown in some European capitals to get tougher with Beijing on issues related to human rights and democracy, the sweeping US export controls on chips — which may soon be extended to other strategic technologies — have shifted the conversation from fears about China to concern about American overreach.

With Germany heading toward recession and Europe facing a harsh winter without cheap Russian oil and gas, “there is little appetite for confrontation with Beijing,” said Noah Barkin, managing editor of the Rhodium Group’s China practice.

“For all the rhetoric about standing up to Xi, forging a common European front and mitigating the risks of economic engagement with China, the actions over the past month have fallen short,” he said. “The risk, if this continues, is more cracks in the transatlantic relationship. We are already seeing some of these cracks in Europe’s reaction to recent US technology controls aimed at China.”

Xi sought to exploit the divisions on his six-day trip to attend the Group of 20 summit in Bali and APEC in Thailand, during which he met with roughly 20 leaders — many of whom he hadn’t seen face-to-face in at least three years. In a meeting with Rutte in Bali, Xi urged the Dutch leader to avoid “decoupling” as the US piles pressure on ASML Holding NV, which has a virtual monopoly on a type of machine needed to make the most advanced chips.

“We must oppose the politicization of economic and trade issues and maintain the stability of the global industrial chain and supply chain,” Xi told Rutte on Tuesday. The Chinese leader also called for increased cooperation in high-tech manufacturing with South Korea in a meeting with President Yoon Suk Yeol, whose nation is home to chip giants Samsung Electronics Co. and SK Hynix Inc.

Later in the week on Thursday, Rutte met with Yoon during a visit to Seoul, where the two leaders pledged greater cooperation. A day later, Dutch Foreign Trade Minister Liesje Schreinemacher said the US shouldn’t expect the Netherlands to unquestionably adopt its approach to China export restrictions.

“The Netherlands will not copy the American measures one to one,” Schreinemacher said in an interview with Dutch newspaper NRC published on Friday. “We make our own assessment — and we do this in consultation with partner countries such as Japan and the US.”

The Biden-Xi summit showed that the world’s largest economies understand their responsibility to overcome divisions, but risks remain of a greater bifurcation without follow through in subsequent discussions, according to International Monetary Fund Managing Director Kristalina Georgieva.

“We are in a world that is going from one shock to another — pandemic, war, inflation, cost of living crisis,” the Bulgarian economist told Bloomberg Television on Saturday. “And if we add on top of it the fragmentation in the world economy, it would be throwing gasoline on a fire. Nobody benefits from it.”

The US moves to restrict trade with China have also come under criticism in Asia, where nations like Singapore have warned against cutting off Beijing economically. Many governments in the region also viewed US House Speaker Nancy Pelosi’s trip to Taiwan earlier this year as unnecessarily provocative.

Biden appeared to address those concerns after his meeting with Xi, telling reporters he didn’t see “any imminent attempt” by China to invade Taiwan and made clear the US policy toward the self-governed island “has not changed at all.” He said Xi was “straightforward,” adding that “I think that we understand one another.”

Though major European leaders are increasingly resistant to rising pressure from Washington, they are far from reaching a consensus on how to deal with an increasingly assertive China. While the European Union has labeled China a systemic rival, policy across the continent remains fragmented.

Former Soviet bloc countries in particular are coming to view Beijing’s economic influence over the continent with suspicion. Finnish Prime Minister Sanna Marin on Thursday warned of Europe’s technological dependency on China, noting the risks of becoming too reliant on an authoritarian regime.

Xi’s diplomatic support for Vladimir Putin, who invaded Ukraine shortly after declaring a “no limits” friendship with the Chinese leader, has also helped strengthen US-Europe bonds. The Chinese leader has recently moved to alleviate some concerns about his relationship with Putin by drawing a red line on the use of nuclear weapons, a line he mentioned during a meeting with Scholz and later repeated with Biden.

Altogether, Xi’s actions at least have Europe thinking about a middle path. In an extended metaphor during his APEC speech, Macron likened the US and China to “two big elephants” in a jungle.

“If they become very nervous and start a war, it will be a big problem for the rest of the jungle,” he said. “You need the cooperation of a lot of other animals.”

–With assistance from Cagan Koc, Debby Wu and Stephen Engle.

Feb. 8—A Fayette County man who was issued a citation Tuesday during a traffic stop in Scottdale is facing a...

WASHINGTON – The House hearing Wednesday into Twitter’s brief suppression of a story about Hunter Biden’s laptop outlined the queasiness...

NFL betting: A lot of bettors are believing a “leaked” Super Bowl score

UN refugee agency (UNHCR) chief on Wednesday called for long-term solutions to help those displaced by the recent conflict in...

A woman has been left shaken after a vandal doused her car in white paint and left a Pokemon card...

Joe Manganiello discovers a surprising truth from his family’s past in the latest episode of “Finding Your Roots,” which aired...

‘Jeopardy!’ host Ken Jennings pokes fun at ‘The Price is Right’ on air

Current Jeopardy! host, Ken Jennings, appears on Jeopardy! The Greatest of All Time in 2020. (Photo: Eric McCandless/ABC via Getty...

Salma Hayek says she was ‘nervous’ about wearing see-through dress to movie premiere: ‘I don’t want to be sucking it in’

Madonna — at Sunday’s Grammy Awards — says she’s been “degraded” throughout her career, so she isn’t exactly shocked by...

Brendan Fraser Says He and Matt Damon Were Fully Nude for School Ties Shower Scene: ‘It Was Scary’

Brendan Fraser is laying bare the real story behind the shower fight scene he had with Matt Damon in their...

Weatherford vs. Anadarko was a matchup of top-10 teams in Oklahoma's Class 4A. The final score was 4-2. It's time...

Terry Bradshaw shed some light on Sean Payton's NFL coaching choice and Cardinals fans might find his comment about Kyler...

Draymond Green doesn't love the Mavericks' blockbuster trade for Kyrie Irving for this one reason.

LeBron James passed Kareem Abdul-Jabbar to stand atop the NBA career points list. To put that in perspective, let's take...

Super Bowl betting: Why fading Patrick Mahomes and the Chiefs is the right play

Patrick Mahomes and the Chiefs may have been here before but the stats don't lie. Philly should roll over Kansas...

2023 NBA trade deadline primer: All the names, teams and situations you need to know for the big day

With Kyrie Irving already finding a new home, what roles will Kevin Durant, Danny Ainge and the Raptors play leading...

Why I snubbed LIV’s payday – and turned into Justin Rose 3.0

As persuasive as the LIV billions happened to be, there was a more powerful voice in Justin Rose’s ear, pleading...

Insider: Here’s why the Colts’ coaching search is taking so long

The Colts coaching search is closing in on a month with eight candidates in play. Here's how an unprecedented season...