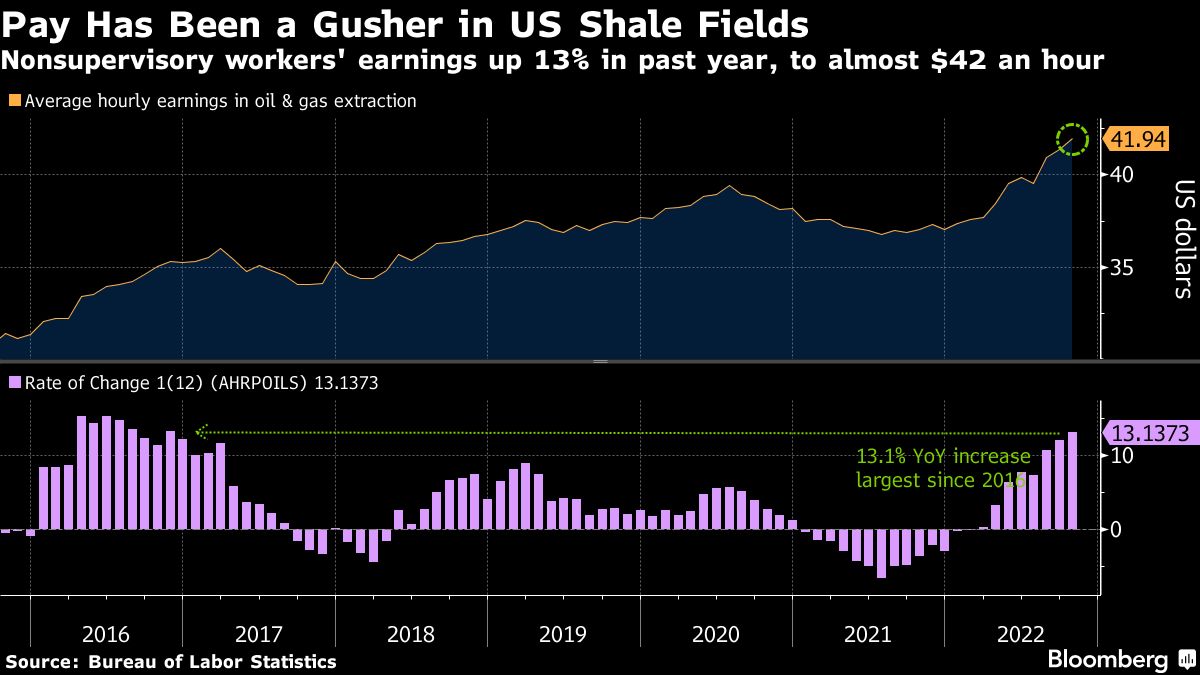 (Bloomberg) — Exxon Mobil Corp. is awarding US employees above-inflation pay increases just weeks after the Texas oil giant posted its highest quarterly profit, underlining how strong 2022 has been for the fossil-fuel industry while other sectors like technology and finance cut jobs.

Workers will receive an average salary bump of 9%, and those who got promoted will see a further 5% increase, according to people familiar with the matter who asked not be identified discussing non-public information. The current US consumer price index is 7.7%.

In aggregate it’s Exxon’s biggest salary award in 15 years, spokeswoman Amy Von Walter said Wednesday. The company is also giving restricted stock options to 14,000 employees globally, which is more than a fifth of its total workforce and up from 5,000 last year. About a third of employees globally received promotions this year, she said.

But surging oil and gas prices following Russia’s invasion of Ukraine, combined with aggressive cost-cutting by Chief Executive Officer Darren Woods, have turned Exxon’s fortunes around. Profits in the second and third quarters were the highest in the company’s 152-year history.

Pay at Exxon is highly dependent on where an employee lies within the company’s performance evaluation system, with some top performers who got promoted receiving raises of between 15% and 25%, people familiar with the matter said. The double-digit pay hikes come at a time when many of the largest tech companies are reducing their workforce while Wall Street banks are cutting bonus pools.

“Our company performance reflects the hard work, commitment and perseverance of our employees,” Von Walter said. “We take great pride in the exceptional business results our teams delivered despite it being a time of uncertainty and significant change.”

Exxon disclosed earlier this week that it had rewarded top executives with a 10% salary boost. US employees also got a one-time cash payment worth 3% of their annual compensation in June. Even after a recent drop in crude prices, the stock is still up almost 70% this year. Exxon recently re-entered the top 10 biggest companies the S&P 500 Index.

With a darkening economic outlook, it’s unlikely that all employees across the economy will be able to command inflation-matching wage increases next year. But oil workers appear to be among the winners. Average hourly earnings in oil and gas extraction for nonsupervisory workers were up more than 13% in October from a year ago to almost $42, according to Bureau of Labor Statistics data. The annual increase is the largest since late 2016.

–With assistance from Vince Golle.