Jessica Simpson details secret romance with 'massive movie star': 'I took the pillowcase he slept on'

Savannah Chrisley gives an update on Todd and Julie's lives in prison: 'There's days that are tough. There's struggles.'

Britney Spears calls out Alyssa Milano for questioning her well-being: 'Feels like a form of bullying' 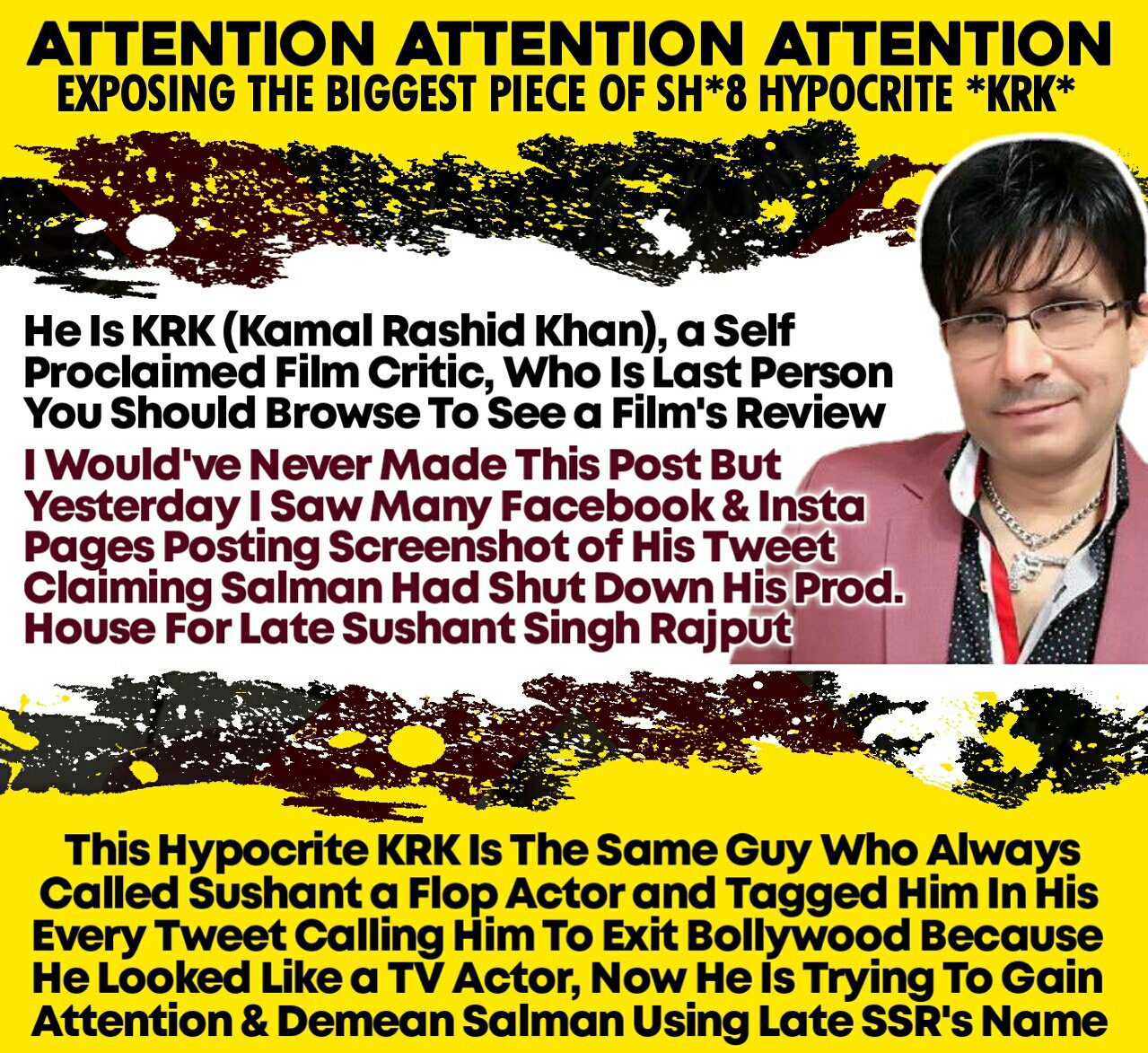 Salman Khan’s fans in support of Sushant’s fight against KRK, Fake KRK aka Kamaal Rashid Khan is an Indian film actor, producer, and writer but he called himself a film critic, today Fake KRK Real Culprit of Sushant Singh is trending on Twitter and social media but why?

The trend was started by fans of Salman Khan and is now trending worldwide. As everyone knows that Bollywood actor Sushant Singh Rajput committed suicide on Sunday in Bandra (India).

But why? was he in depression? Yes, it looks like he was depressed but who was responsible?

There are three categories of people who were responsible.

3) Mafia (not gangsters but Bollywood Mafia’s)

Today fans of Sushant Singh Rajput are participating in a trend called “FakeKRKRealCulpritOfSushant” and Sushant’s fans are blaming KRK for Sushant’s suicide. Fans of Salman Khan are blaming Kamaal Rashid Khan for his fake film reviews against Sushant Singh. KRK takes money from the producers for giving them positive reviews on their films and even he takes money from celebrities too but those who refused to give money, KRK then gives negative reviews to the celebrities and on their film.

One user wrote that Sajid-Wajid, Himesh, Katrina, and many other celebrities had no connection from the filmy family, but Salman Khan helped them.

Sajid-wajid, Himesh , Katrina , Sanjay Leela , Sneha Ullal, Daisy Shah, Zarine Khan these people had no connection from any filmy family but Salman Khan helped them to fulfill their dreams.

Haters would never understand this !#FakeKRKRealCulpritOfSushant

Kamaal R Khan is a mental harasser,’ a user tweeted

▪Huge ️152K Tweets Done On Our Tag, #FakeKRKRealCulpritOfSushant and Tag Is Trending NATIONWIDE NO.1!

▪️Whole India Is Seeing This Bully and Mental Harasser @kamaalrkhan's Face Today, How He Spread Fake News and Take Sympathy of The Departed!

Fans are trending #FakeKRKRealCulpritOfSushant to bring out the truth and expose the absolute filth spread by this 2/- rs person against the departed soul.

How many A list actors from Bollywood promoted #Kedarnath?

How many Alist Actors from Bollywood invited #SushanthSinghRajput to their birthday parties?

ONLY SALMAN KHAN DID
& look how they are having a blast ❤️ They looked so comfortable together #FakeKRKRealCulpritOfSushant pic.twitter.com/pY4WrP83c4

When #SalmanKhan Invited #SushanthSinghRajput For Movie Promotion , If Salman Doesn't Like Sushant Then Why He Invited him In His Birthday Party & Bigg Boss #FakeKRKRealCulpritOfSushantpic.twitter.com/zPt3dUuDA3

Dear Bollywood I am surprised that u follow such a negative person who abuses stars& forces them to go into depression.He doesn't review films, stars,politics,Politicians, but he gets personal & hits below d belt.#JusticeForSushantSinghRajput #FakeKRKRealCulpritOfSushant
? pic.twitter.com/yFVeSt3Ysg

Randeep Hooda prepared for Battle Of Saragarhi for 2 & a half yrs. However this movie was shelved after Karan Johar announced Akshay Kumar's Kesari. Actor said he was deeply saddened audience couldn't see what would have been a more authentic version#FakeKRKRealCulpritOfSushant pic.twitter.com/f8n7g9Cz9Z

TOKYO (AP) — Honda is expanding the use of hydrogen to include trucks and construction equipment, electricity for buildings and...

All the Super Bowl titles and records might not have happened if Brady didn't listen to then-Wolverines head coach Lloyd...

Georgia’s jailed ex-President Mikheil Saakashvili is seen on a screen via a video link from a clinic during a court...

Olivia Newton-John was ‘free of pain’ in her final days, her widower revealed on Thursday, as details of her state...

With Pitt trailing by one point and :27 seconds remaining in the game, the Panthers put the ball in the...

No American team sports GOAT was as doubted as Tom Brady, not even close. His career is hard to put...

How to be a successful baseball hipster in 2023.

The Broncos hired Sean Payton to make sweeping changes. Nothing will matter more than his effect on Russell Wilson, last...

Charles McDonald's third mock draft this cycle is loaded with intrigue. Are you happy with your team's selection?

Patrick Mahomes, Chiefs wouldn’t be in another Super Bowl without an incredible success rate in the NFL Draft

Kansas City has absolutely nailed the last three drafts, which is key for a team that has so much of...

Ryan Poles wants as many bidders as possible for the No. 1 overall pick, and the Carolina Panthers might have...

Beathard was inducted into the Pro Football Hall of Fame in 2018.