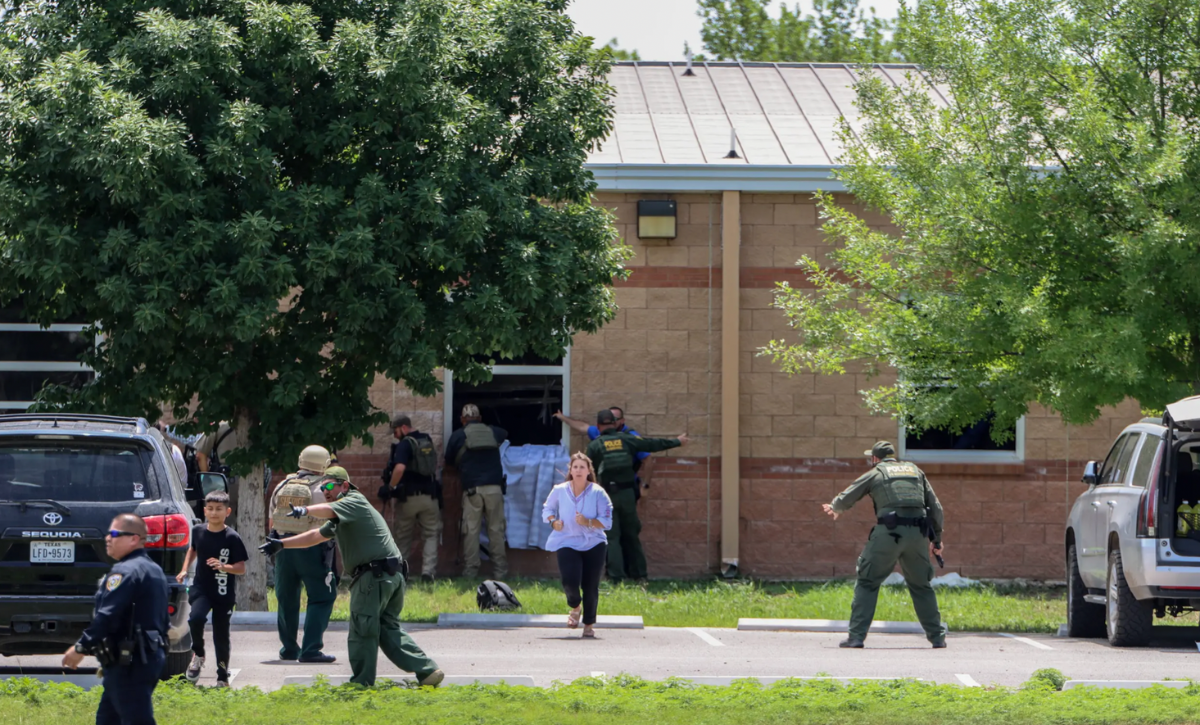 This week, Uvalde schools police Chief Pete Arredondo and his attorney granted an exclusive interview to The Texas Tribune to detail his version of what happened inside Robb Elementary School on May 24, when a shooter killed 21 people.

Arredondo communicated with the Tribune through a phone interview, an in-person interview with his attorney and multiple emails.

Sign up here for The 74’s daily newsletter. Donate here to support The 74’s independent journalism.

He described the moments from when he arrived at the school, prepared to face off against the gunman. He entered the school, heard gunshots and was unable to break through a locked door to take down the shooter.

Arredondo, who is currently in hiding, has been publicly criticized for his role leading the law enforcement response to the school shooting because it took more than an hour after arriving on the scene for law enforcement to get into the classroom and kill the gunman.

Here are five major takeaways from our complete coverage.

Arredondo has taken the brunt of the criticism for the slow response because he has been publicly labeled the incident commander.

At a news conference, Department of Public Safety Director Steve McCraw identified Arredondo as the incident commander and said it was the chief’s decision to treat the gunman as a “barricaded suspect” rather than an active shooter. He said it was the “wrong decision, period.”

Arredondo said he never made the call to stand down or to treat the incident as a “barricaded suspect.”

“I didn’t issue any orders,” Arredondo said. “I called for assistance and asked for an extraction tool to open the door.”

The National Incident Management System, which guides all levels of government on how to respond to mass emergency events, says that the first person on scene is the incident commander. That incident commander remains in that charge until they relinquish the role or are incapacitated.

George E. Hyde, an attorney for Arredondo, acknowledged those guidelines but said Arredondo’s initial response to the shooting was not that of an incident commander, but of a first responder.

“Once he became engaged, intimately involved on the front line of this case, he is one of those that is in the best position to continue to resolve the incident at that time,” Hyde said. “So while it’s easy to identify him as the incident commander because of that NIMS process, in practicality, you see here he was not in the capacity to be able to run this entire organization.”

The decision to leave the radio was intentional

Much has been reported about how Arredondo did not have a radio while inside the school, preventing him from being able to receive and relay crucial details with other law enforcement.

Arredondo said this decision was intentional. He told The Texas Tribune that he expected to confront the gunman and wanted both hands free to hold his gun, ready to aim and fire quickly and accurately. He left the two radios outside the school.

Arredondo believed that carrying the radios would slow him down. One had a whiplike antenna that would hit him as he ran. The other had a clip that Arredondo knew would cause it to fall off his tactical belt during a long run.

But that decision also meant that for the rest of the ordeal, he was not in radio contact with the scores of other officers from at least five agencies who swarmed the scene.

He was thwarted by a door

When Arredondo got into the school, he remembers the gunman firing a burst of shots from inside the classroom.

Arredondo checked to see if one of the two classroom doors would open but found it locked.

Arredondo described the classroom door as reinforced with a hefty steel jamb, designed to keep an attacker on the outside from forcing their way in. But with the gunman inside the room, that took away law enforcement’s ability to immediately kick in the door and confront the shooter.

Finding no way to enter the room, Arredondo called police dispatch from his cellphone and asked for a SWAT team, snipers and extrication tools, like a fire hook, to open the door.

The extrication tools never materialized, but Arredondo had also asked for keys that could open the door. Eventually, a janitor provided six keys. Arredondo tried each on a door adjacent to the room where the gunman was, but it didn’t open.

Later, another key ring with between 20 and 30 keys was brought to Arredondo.

“I was praying one of them was going to open up the door each time I tried a key,” Arredondo said in an interview.

Eventually, the officers on the north side of the hallway called Arredondo’s phone and told him they had gotten a key that could open the door.

His strategy was to save as many children as possible

Without any way to get into the classroom, Arredondo said he and other officers worked toward getting the other kids out of the school.

“It’s not that someone said stand down,” Hyde said. “It was ‘Right now, we can’t get in until we get the tools. So we’re going to do what we can do to save lives.’ And what was that? It was to evacuate the students and the parents and the teachers out of the rooms.”

Arredondo told officers to start breaking glass windows from outside other classrooms and evacuate those children. He wanted to avoid students coming into the hallway, where he feared too much noise would attract the gunman’s attention.

At one point, a Uvalde police officer noticed Arredondo was not wearing body armor. Worried for the chief’s safety, the Uvalde officer offered to cover for Arredondo while he ran out of the building to get it.

“I’ll be very frank. He said, ‘Fuck you. I’m not leaving this hallway,’” Hyde recounted. “He wasn’t going to leave without those kids.”

The Tribune spoke to seven law enforcement experts about Arredondo’s description of the police response. All but one said that serious lapses in judgment occurred.

Most strikingly, they said, by running into the school without his radios, and failing to take charge of the situation, the chief appears to have contributed to a chaotic approach in which officers deployed inappropriate tactics, adopted a defensive posture, failed to coordinate their actions, and wasted precious time as students and teachers remained trapped in two classrooms with a gunman who continued to fire his rifle.

Steve Ijames, a police tactics expert and former assistant police chief of Springfield, Missouri, said it is highly unusual for a police officer to intentionally ditch his radio while answering a call.

“I’ve never heard anything like that in my life,” Ijames said.

Ijames added that it is “inconceivable” that Arredondo’s officers did not have a plan to access any room or building on campus at any moment, given the school district makes up the entirety of the tiny force’s jurisdiction.

This article originally appeared in The Texas Tribune at https://www.texastribune.org/2022/06/09/pete-arredondo-uvalde-school-police-chief-interview/.

The Texas Tribune is a member-supported, nonpartisan newsroom informing and engaging Texans on state politics and policy. Learn more at texastribune.org.