Former RI governor and US attorney Lincoln Almond dies at 86 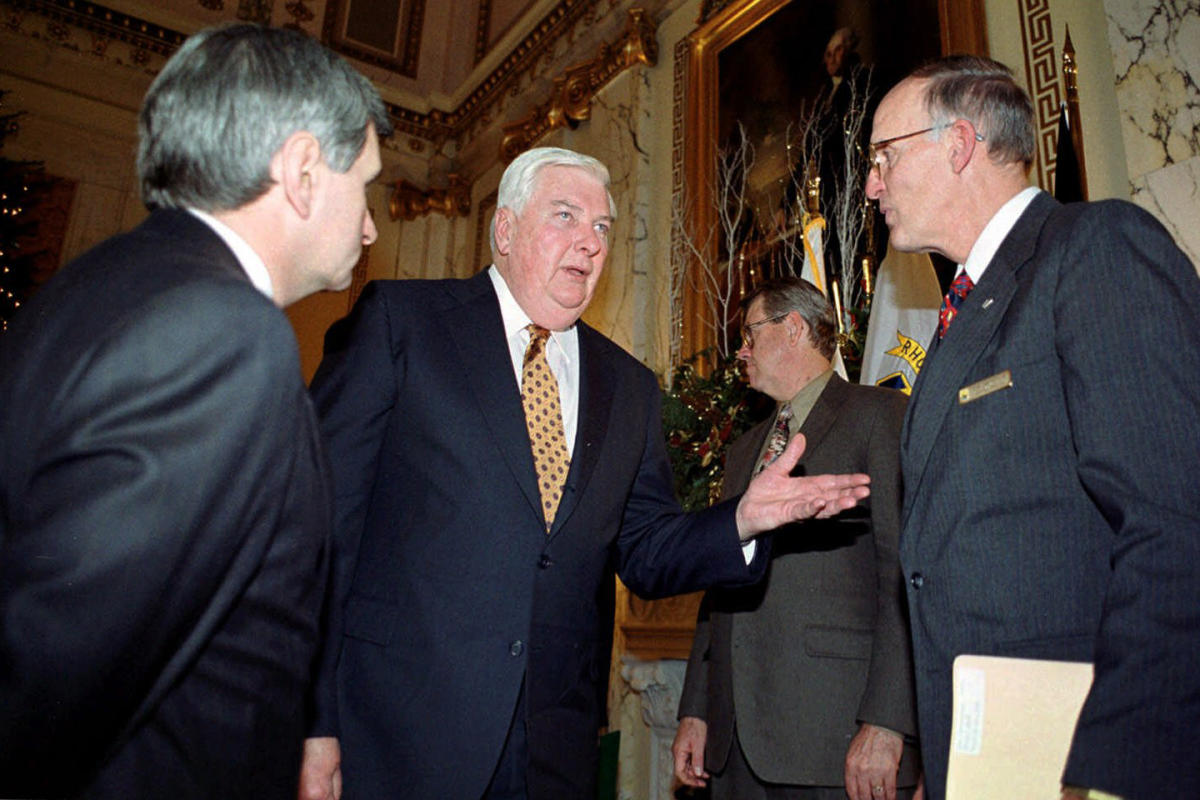 Lincoln Almond, a former two-term Republican governor of Rhode Island and longtime U.S. attorney in the state has died. He was 86.

Almond died on Monday, according to an obituary posted at the Avery-Storti Funeral Home and Crematory’s website. No cause of death was provided.

As governor from 1995 until 2003, Almond expanded health care and daycare opportunities for children, boosted funding to update neglected state college campuses, and overhauled the state Department of Economic Development to help diversify the economy and bring tens of thousands of well-paying jobs to the state.

He also successfully fought efforts to bring casinos and other expanded gambling opportunities to the state.

“The first governor to serve a four-year term, Governor Almond often said his number one goal was to make Rhode Island a place where people wanted to work and raise a family,” McKee said in a statement. “Whether it was expanding the number of state subsidized child care seats, increasing education aid, investing in Rhode Island’s institutions of higher education, creating thousands of good paying jobs and laying the foundation for Quonset to be the economic engine it is today — Rhode Island was better off because of his eight years as Governor.”

Almond served as U.S. attorney for more than 20 years, from 1969 until 1978 and from 1981 until 1993. He made a name for himself with a string of political indictments and drug convictions that included busting an extensive money laundering ring run for Colombian drug lords.

Almond’s political career got off to a modest start when he was appointed in 1963 to fill an unexpired two-year term as Lincoln’s town administrator. He failed in initial bids for the U.S. House in 1968 and for governor in 1978.

He was the longshot who paid off in the 1994 gubernatorial campaign, besting a sitting congressman, Rep. Ron Machtley, in the GOP primary. He defeated Democratic state Sen. Myrth York in the general election.

“He capped off his career with eight years as governor, always displaying dignity and compassion while working in a bipartisan fashion to accomplish so much for the people of Rhode Island,” House Speaker K. Joseph Shekarchi said in a statement Tuesday.

Allan Fung, a Republican who ran for Rhode Island governor twice, and state Rep. Barbara Ann Fenton-Fung, said in a joint statement that Almond was a kind man and a leader who led the rebirth of Rhode Island’s higher education institutions.

“He was extraordinarily funny with a hearty laugh, and always had a great way about him in seeing the big picture and being a longterm thinker,” the couple said.

Almond was proud to be the first University of Rhode Island graduate elected governor. Having grown up in working-class Central Falls, Almond was keenly aware of the importance of a good education. He often said he might never have been elected governor had he not been able to attend the state university.

He graduated from Central Falls High School and had a law degree from Boston University.

In retirement, Almond cheered on his URI Rams basketball team, walked endless miles with his wife on the beaches of Wellfleet, Massachusetts, where they also had a home, and took great pride in caring for his lawn.

He is survived by his wife of 64 years, Marilyn Almond, as well as a son, daughter and five grandchildren.

‘Prophet of Doom’ to plead guilty in Brooklyn subway attack

US News to change ranking system after law schools’ boycott