Irishman’s slams pubs and nightclubs across the… 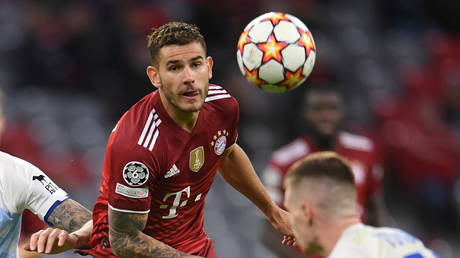 Bayern Munich defender Lucas Hernandez, 25, has been sentenced to six months in prison by a Madrid court for violating a restraining order related to a domestic incident between him and his then-girlfriend.

France star Hernandez, who was a member of Les Bleus’ victorious World Cup squad in Russia in 2018, has been ordered to report to court in the Spanish capital on Tuesday four years after he was arrested over a violent altercation with his girlfriend, Amelia Ossa Llorente.

Llorente required hospital treatment for minor injuries stemming from the incident but despite neither she nor Hernandez requesting that charges be pressed, a six-month restraining order was imposed by the court which forbade the couple from seeing one another after Spain’s public prosecutor pursued charges on both Hernandez and Llorente.

However, the pair were seen returning to Spain after getting married in direct violation of the court-ordered order.

Llorente was handed a punishment of 31 days’ community service for violence, assault and damage to property due to the fracas, while Hernandez was later given a six-month sentence in December 2019 for violating the terms of the restraining order.

Llorente was spared the charge of violating the restraining order after it was proved that she was unaware of it at the time.

Spanish laws, though, dictate that figures given prison sentences of less than two years rarely serve any actual time – but given that Hernandez’s was a repeat offence, he was been ordered to serve the full six-month term. His appeal against the sentence was dismissed.

After his court appearance next week, Hernandez will be given 10 days to report to a jail of his choice to serve his sentence.

Hernandez currently has 29 caps for France and was part of the squad that won the UEFA Nations League Final last week.

He joined Bayern Munich in the summer of 2019 for €80 million – a sum which makes him the third-most expensive defender in football history. His time in Germany has been successful, winning two Bundesliga titles as well as the 2019-20 Champions League.

Should he serve the full sentence, Hernandez would be absent from club and international duty until at least April 2022.