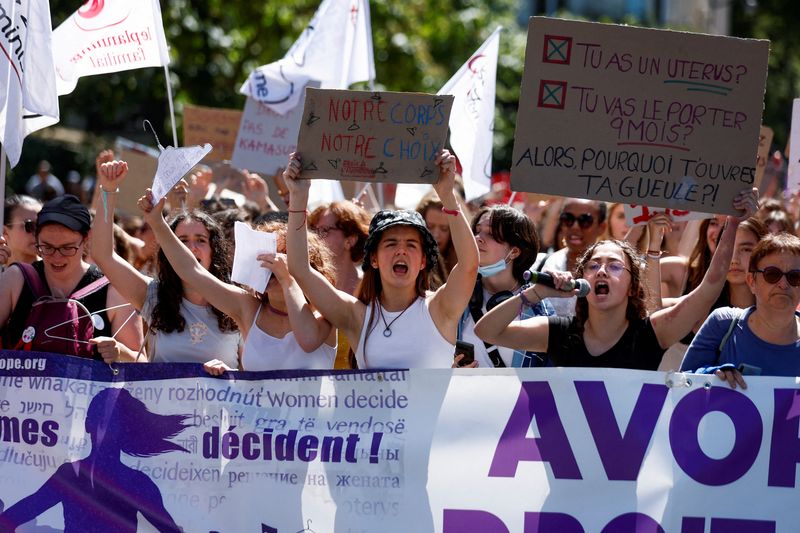 PARIS (Reuters) – French lawmakers debated on Thursday whether to enshrine abortion rights in the constitution, with MPs on the left and centre saying the U.S. Supreme Court’s overturning of a landmark ruling in June showed the need for new steps.

Women have had a legal right to abortion in France since a law adopted in 1974, and updated several times since, with the latest modification in February extending access to abortion to 14 weeks of pregnancy from 12.

Adding it to the constitution would further protect this right and make it harder to overturn in France, said La France Insoumise (France Unbowed) lawmaker Mathilde Panot.

“It aims to prevent any regression,” Panot told parliament. “We don’t want to give any chance to people hostile to abortion and contraception rights.”

Abortion rights are more widely accepted in France than in the United States or some fellow EU countries. Some 83% of French people are happy with the fact that abortion is legal, an Ifop poll showed in July, 16 percentage points more than about 30 years ago.

The same poll showed 81% back adding the right to abortion in the constitution.

Lawmakers will vote on Thursday on a proposal put forward by the left, and next week by President Emmanuel Macron’s Renaissance party, both of which would give a broad constitutional guarantee to abortion rights.

Yet the conservatives and far right have been largely opposed to it and many would only consider giving more weight to the 1974 law.

“Stop playing with fears of a reversal of abortion rights which you know are impossible in France,” hard-right lawmaker Emmanuelle Menard said.

But even if the lower house of parliament, where Renaissance is the biggest party, does vote one of the two proposals this week or next, the path to enshrining the right to abortion in the constitution will not be easy.

In order to change the constitution, a bill must be voted on in the same terms by the lower house and the Senate.

The latter is controlled by the right and last month rejected a cross-party bill aimed at constitutionalising the right to abortion and contraception.