Pfizer asks US to authorise COVID booster jabs for all… 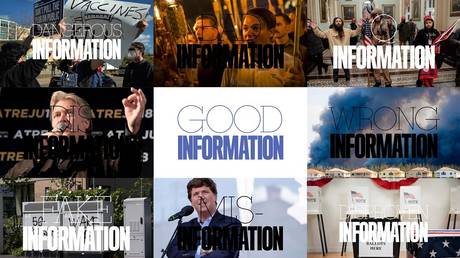 The newest combatant in the US ‘disinformation’ wars is a media company bankrolled by Democrat mega-donors Reid Hoffman and George Soros, and run by an operative whose astroturfed local news outfit was actual misinformation.

Good Information, Inc. launched on Tuesday as “a civic incubator committed to investing in immediate solutions that counter disinformation and increase the flow of good information online.” According to Axios, it is bankrolled by LinkedIn co-founder Hoffman, Soros, as well as Silicon Valley investors Ken and Jen Duda and Incite Ventures.

Exclusive: Billionaires Reid Hoffman, George Soros and others back new media firm led by @taraemcg to combat disinformation
— As part of its launch, “Good Information” will acquire @CourierNewsroom, a local news group with a progressive perspective. https://t.co/v4ddccFPoK

Tara McGowan, a former Democratic strategist who worked on Barack Obama and Hillary Clinton’s 2012 and 2016 campaigns – and ran a progressive nonprofit called ACRONYM that spent a whopping $100 million on a digital ad campaign to defeat Donald Trump in 2020 – has been put in charge of the venture.

ACRONYM was a major investor in Shadow, the outfit that mangled the results of the Iowa caucuses early on in the Democratic primary process, hurting the candidacy of Vermont Senator Bernie Sanders. Another of its operations, Courier Newsroom, will be sold to Good Information for an undisclosed sum; McGowan reportedly recused herself from the deal.

Ironically, Courier Newsroom was repeatedly called out for misinformation, including by NewsGuard – another major player in the “disinfo” wars – in the pages of the Washington Post, no less.

“Courier Newsroom is a clandestine political operation,” wrote NewsGuard’s Gabby Deutch, who described it as “a different, more tech-savvy form of political misinformation.”

Courier and Acronym are “exploiting the widespread loss of local journalism to create and disseminate something we really don’t need: hyperlocal partisan propaganda,” Deutch added in a February 2020 article.

None of that prevented McGowan from gushing about her new venture as something that will fix the “broken, divisive information ecosystem in which we find ourselves today” that is “an all-hands-on-deck challenge for American democracy.”

One thing that the #FacebookPapers make abundantly clear is that bad information flowing online is one of the gravest threats that we face as a society – and major tech platforms like @Facebook are making it much, much worse for their own financial gain.

“I still believe that winning elections is necessary to preserving our democracy,” she added. “But the information crisis is bigger than politics – and requires solutions beyond it.”

To prove that her new outfit won’t be a hyper-partisan Democrat operation, McGowan cited The Bulwark, “a center-right news site founded in opposition to Trumpism,” as an example of a conservative news outlet Good Information could support. Left unsaid is that The Bulwark are “conservatives” in name only, whose obsessive hatred of Trump has them endorsing just about every Democrat running for any office in the US.

The new company’s advisory board tells a similar story, consisting of mainly Democrat activists advocating for censorship. One notable name that leaps out is Nandini Jammi, previously of the pressure group Sleeping Giants who then launched her own operation called Check My Ads. Jammi’s modus operandi is to contact advertisers and services used by people she disagrees with, and call them racist.

This is how it works in the Globalist American Empire

Just as Revolver News breaking ground with investigative reporting, our email service cuts cord with us because some nobody commissar complained@Bigmailer is going to regret this decision Big Time pic.twitter.com/tnVqL3LBvo

All of this, however, pales in comparison to the chief founder of the new venture. Hoffman publicly apologized in December 2018 for funding New Knowledge, a Democrat tech outfit advising the Senate Intelligence Committee on “Russian meddling” in US elections.

That’s because New Knowledge admitted to running a false-flag “Russian bot” campaign to get a Democrat elected in the special election for the Senate in Alabama the year prior.

Again, the only actual meddling in US elections by ‘Russian bots’ turned out to be a false flag by a Democrat-run tech company. New Knowledge has since rebranded while its operatives moved up to bigger and better things – such as the Stanford Internet Observatory, another major “disinfo” player.

Soros, of course, is well known for lavishly funding Democrat candidates and causes, from backing California Governor Gavin Newsom against the recent recall initiative to dropping massive quantities of cash into local elections for district attorneys in major US cities and counties over the past several years.

Global internet freedom continues to decline as governments increasingly crack down on free online expression and as false and misleading information proliferates. https://t.co/KQvAdgT6OM

Aryan Khan Case LIVE: Bail Hearing Of Other Accused On In High Court

Brexit has been a ‘catastrophe’ for UK, says EC internal market commissioner amid fuel shortages and reports of empty shelves

Canada floods: Farmers rescue cows after a month’s worth of rain in two days